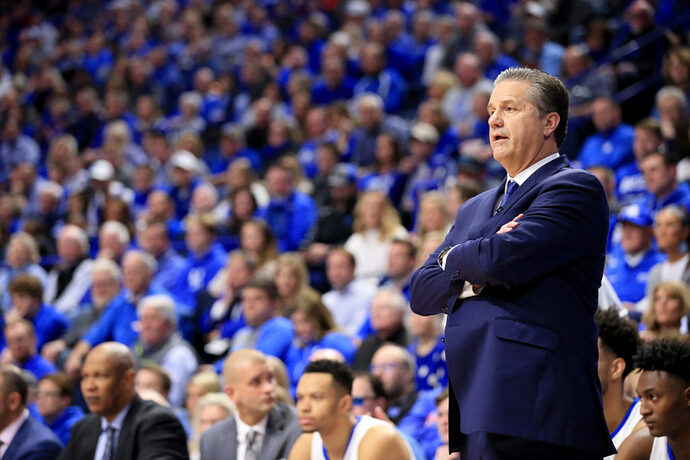 Prior to the buzzer sounding in Saturday's conference loss to Arkansas, the Kentucky Wildcats could be seen leaving the court early.

They had nothing to worry about. We weren’t going to storm the court just doing what we should be doing. But, whatever…

a bad look for the blues…if cal was worried about the team, what about the five left on the court? He was simply being a prima dona.

Cal being soft, per the usual.

Not a Cal fan, but I understand why he would do that. Watch the end of the Auburn game and I’d probably do the same.

A non story to me

Kentucky doesn’t do handshake lines either.

I don’t think it’s a story. I don’t care if they shake hands. But I’ve seen ONE coach pull his bench off the court before the game was over-and it was Calipari, not because he cares about security, necessarily. It’s more about his unquenchable thirst for attention.

Agreed. Everything is about him. We weren’t going to storm the court, because they ain’t that special. We just did what we should do. Next.

They are paying him 8 million to recruit well. He’s won the same number of Natty’s at KY as Nolan did at Arkansas.

A lot of people saying not a big deal, and as far as current events go certainly there’s worse going on in the world. But as far as basketball goes I couldn’t be more pissed! First of all what the hell does he think Arkansas fans are a bunch of thugs gonna spit on his players or slap him in the nuts or what is he trying to say? We didn’t do nothing like that when we actually did storm the court. And second of all could this guy get any more arrogant and delusional?! Why the hell would we storm the court for him, for kentucky?! They ain’t number one in anything! Not the first in the country not first in the conference and and they haven’t beat us in a couple of years. This guy is a peice of work man. He’s a disgrace to the game of basketball and an affront to Razorback basketball. He expects to pull this kind of crap to show us up on our home court and still expect to show his face in Fayetteville and have a nice dinner with Jon Tyson t Herman’s? He don’t wanna see me in line for the pisser after a few ribs and buds I’ll tell you that much. I’d tell him all this and some. Woo pig sooie

Yeah, it was completely understandable, even though fans were ‘asked’ not to storm there is no guarantee they don’t. That place was hyped up.

As it turned out it was hilarious. We really stood them up.

Let’s just call it “The Walk of Shame”……

I also think $250,000. Is a bit excessive for something you really don’t have any control. If the fans wanted to rush the court yesterday they could have easily.

I also think $250,000. Is a bit excessive for something you really don’t have any control. If the fans wanted to rush the court yesterday they could have easily.

But our Fans IMO showed real Class by listening to Hunter Yurachek. Also it just might not be a better time to be a Razorback!

If Cal had an ounce of class, he would make Oscar walk out of the lane instead of building a cabin.