He’s like a son to me. Last night he signed a two way contract with the Trailblazers on his birthday. I’ve cried a few times since I found out this was happening.

What an amazing ride Keljin has had. From the Hot Springs Boys and Girls Club to the NBA! 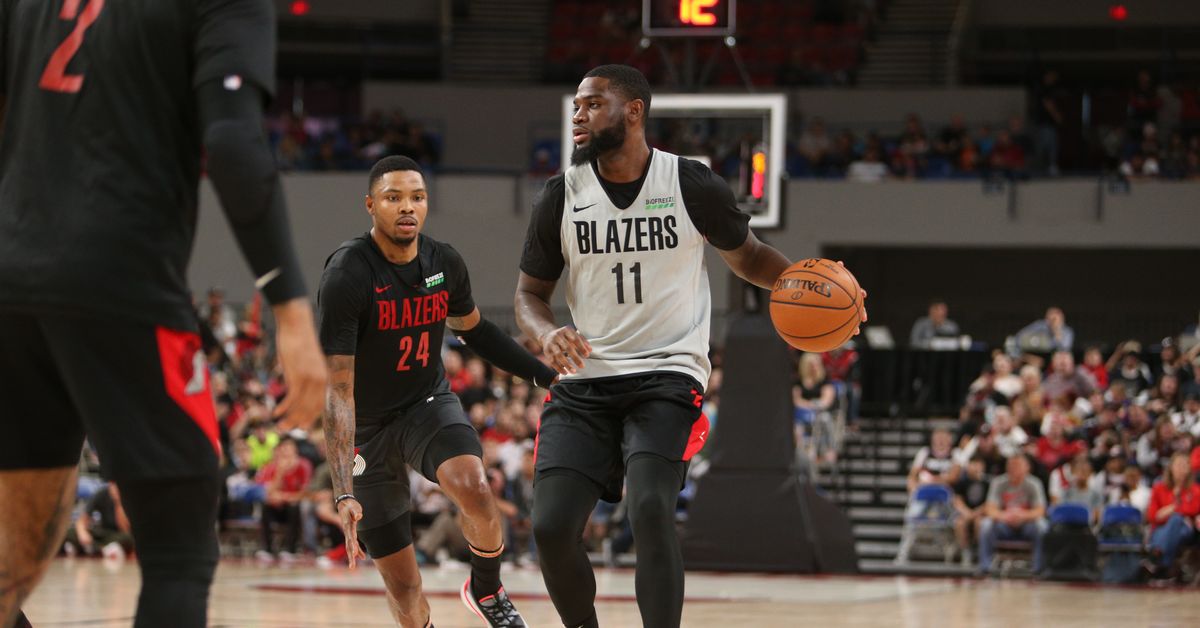 Keljin Blevins Agrees to Two-Way Contract with the Blazers

Damian Lillard’s cousin, Keljin Blevins, has agreed to a two-way contract with the Trail Blazers.

Cool. Where did he go to high school?

He went to Lakeside 10th and 11th grade and then he transferred to Bishop O’Connell in Virginia for his senior year.

He played in Bud Walton a few years ago when he was a senior at Montana State.

Wow! Did you expect him getting a look in the pros? Congratulations to him.

Not until his senior year of college. He was in training camp with the Blazers last year and played on their summer league team. They were pretty much full so they let him go after summer league.

He then got drafted 15th in the G league to the Naz Suns. He did ok there but the team was awful. He just kept working and training. He lives with Damian Lillard so he has all the resources Dame has. The Blazers love his upside and his character. He’s a humble young man that will do whatever is asked of him.

He was my worst player when I started my program. He was in the 6th grade and didn’t get much better until the 8th grade. When he got better though it was quiet the jump. I’m so happy for him and can’t wait to see what’s next.

The best part is he has a baby girl on the way and this contract is guaranteed for one year with full benefits. Just a wonderful Thanksgiving for Keljin!

So cool Razorblack, mostly knowing that you were able to impact his life. Kudos

That’s fantastic. And, at Thanksgiving makes it mean even a little more! What you’ve done for the many boys that have played on your basketball team is nothing short of heroic!

He was my worst player when I started my program. He was in the 6th grade and didn’t get much better until the 8th grade. When he got better though it was quiet the jump. I’m so happy for him and can’t wait to see what’s next.

Nice. All the best to him. Just curious. When you say 8th grade was quite a jump, was that in ball handling? I have seen some kids look like they don’t have a clue on how to handle the ball and just in a year look totally different. It usually comes around 8th or 9th grade.

Thank you so much! At one point I had around 30 kids between two teams. We had a blast for 8 years playing all over the place. So many good memories.

My point guard, who I had known since he was born, was murdered on my birthday last year. One of the worst days of my life. His killer has never been caught. The only reason I started the program was to keep kids off the streets and away from trouble. I never thought Kenny (my point guard) would be killed at the age of 23.

Thank you so much Harley! It was quiet the ride. Thank you for always saying such kind words…means a lot!

So to make a long story longer…lol…Keljin was a cry baby. Every time he came out of the game in 6th and 7th grade he would cry and pout. It drove me crazy and I would get on him pretty hard. During 7th grade his mom wanted him to quit. The boys around him were all getting better and Keljin was not progressing.

After our 7th grade season we were at our team party and he said he needed to talk to me. I figured he was going to quit even though I was going to do everything I could to not let him. He asked me what he had to do to get more playing time next year. I told him 3 things. Get rid of that left arm chicken wing when you shoot, work on your ball handling and quit crying and pouting.

During 8th grade school ball I could tell he was getting better but his team was loaded, so he didn’t get to show much. A few months later when we started practice he walks up and says watch this coach. He went to the three point line and I said don’t even think about it! He pulled up with no chicken wing and nailed about 6 in a row from everywhere. I was in shock! He turned around and said I’m done crying coach. I asked him what he had been doing. He told me that his junior high coach let him stay after school every day and use the shooting machine.

He would go on to become our best player and best three point shooter for the next 4 years. His dad, who I grew up with, died on new years night Keljin’s freshmen year of college. He had a massive heart attack at the age of 45. Watching Keljin and his brother, who was also on my team, push their father’s casket out of the church was heart wrenching. I prayed daily that they would both survive losing their dad. So far so good!

Oh yea…his mother and I are like sister and brother now. Also I tell Keljin about every few months to keep working on his ball handling…lol

What a story. Helping kids is so rewarding. Thanks for all you do for those fortunate kids you coach and mentor.

Thank you so much LD!

Thanks for giving us the details, especially the human side. Have been reading your posts over the years. No question you have been a great asset to the community in making young men grow up athletically and as a family.

Thank you so much PJ!

Razorblack, I’ll never forget what men like you did for me when I was a youngster in the Pine Bluff Boys Club! Basketball, football, swimming, Saturday movies, leadership lectures, etc. Thanks for all you have done…

What an awsome story. Those young men are so fortunate to have in their lives. Talk about making a lasting impact on the world!

Thank you for your story and your efforts to guide young men in the right direction. God Bless you and Happy Thanksgiving. GHG!

Amazing story but most amazing is the time and effort you put in sir. The rewards that come with it from your standpoint are awesome but most importantly the rewards those kids get later by following your lead in dedication and work ethics.
It’s one thing to be able to coach the sport, any sport but just as important is being able to connect with all types of kids from all types of backgrounds and situations.
Sorry to hear about the tragic outcomes of a few and that must be very hard to deal with at times, but I highly doubt there was anything more you could have done.
It’s great to hear when people such as yourself really care about kids and young men or women and help in nurturing them to be better athletes and better people.

That is awesome news! Keljin is also probably the first Montana State Bobcat since the great Quadray Lawless to sniff the NBA.