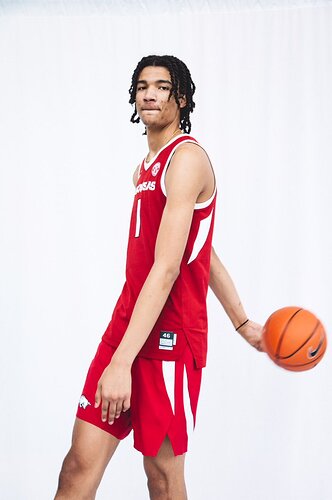 I could be wrong and it’s just a guess, but one would think deciding early - especially if he does NOT take the scheduled official to Texas in early September - would be viewed as good news for home team.

Butt the talented but quiet young man is hard to read.

Senor RD and Senor Dawson how am I suppose to sleep this week?!

I’m down with the Unisom sleep tabs, melatonin and books on tape.

Is August 9 a significant date for Kel’el or his family? Please call the Hogs!

After all the rumors over the last two weeks, I was flabbergasted to see this.

Yes, this would seem to be really, really good news for us.

Edit: Guess I stand corrected, McPherson said he did his due diligence and it’s not Arkansas

I think Arkansas had a lot of catching up to do. Did the visit to Fayetteville do that? Not sure it did but we’ll see.

Will be interesting. If this holds true, and Ware leaves for Texas or Oregon you do have to wonder what it is about these high profile Central Arkansas kids that make it so easy for them to leave the state especially when Muss has the program at a national level again.

I think each kid is different. I believe a lot of kids have an idea where they want to go before the process starts. Some grew up rooting for a certain team while others might have wanted to go out of state and experience something different.

Maybe Oregon has already hooked him up with Nike. If Oregon actually has an in like that with Nike, they will replace KY, Duke, and NC as the team to beat with every top recruit.

Oh, also, I’m not sure how deep McPherson’s due diligence goes as far as Razorback basketball.

You are correct. I do think, however, that some kids who thought they knew where they wanted to go early on in the process, end up changing their minds. Or have their minds changed for them. I’m sure it’s a struggle for some of them.
Way too many carrots on a stick out there now.

Could be. But, while we have a Bobby Portis, we also have an established trend with Archie Goodwin, Malik Monk, and now likely Ware and Smith.

It’s much easier to see that a 5 star kid would reject his home state if our program was not nationally competitive, and if there was a substantial difference in coaching and recognition at other programs.

But, that’s just not the case here. Our program is nationally competitive again. We have a staff that is second to nobody in NBA experience. And we have shown a 1 and done can happen here. And, Muss and staff have pursued these kids all over the country at these summer events.

Fans from around the state will be justified in their curiosity to know just why is our program just not good enough for them.

Oh, also, I’m not sure how deep McPherson’s due diligence goes as far as Razorback basketball.

I actually agree with this part

I hinted a bit in my first comments but since it’s out, I’m not optimistic about Arkansas’ chance.

Richard do you have a feel for where he likely goes?

Gotta admit, this one hurts

Yeah, but some of us drink every day!

would be a great Birthday gift for me.

You can’t lose something you never had.