Where are the “Keep CCM” posters?

Just wondering why you think that?

If you believe CCM must remain as head coach even if the Hogs finish 2-10, please speak up and make your case as to why.

If he finishes 2-10 he’s gone. No questions asked, even those that have said he deserves a third year have said that.

3-9 (0-16 SEC) will probably get him fired, unless he plays KJ and we compete with both LSU and Missouri, and show that KJ is the QB of the future.

If he beats W KY and Missouri, he will probably get a chance, because we need to improve a lot to win both, but it might not still be enough.

If he somehow beats LSU, I think he’s safe, but I seriously doubt that’ll happen.

As for next year, if (again IF) he’s retained, he needs to go bowling. Period, anything less and he is gone for sure.

If beating a team that Arkansas State Teachers College beat on the road is enough to give Morris another year we need to quit pretending at SEC football and join CUSA.

It’s embarrassing there is even discussion that a win over the WKU Hillbillies and Ty Storey is some type of measuring stick for Morris.

I agree . But this is the sec and he’d was supposed to have a chance against Mississippi State , and you see what happened there. Gave up 40 points in the first half at home . I have been watching Arkansas football for 67 years. This is hard to take.

If he loses to WKY think he will be gone the next day. Otherwise will most likely be fired right after the Missouri game.

Beating all 3 and he most likely stays, but the odds of that happening is .001%…

In my opinion, 3-9 is not any improvement from 2-10. If we do win Sat. 2.5 pt favorite over WKU is unacceptable HY needs to pull the plug

I think if he loses the WKU game he’s in a hole he can’t get out of. If he plays a lot of the younger guys and they rout WKU then have decent showing against LSU (not routed) and either beat or at least play very close with Mizzou he stays. If nothing else to save recruiting and the current roster and give them another year to reduce costs.

That all being said IMHO it comes down to if HY has someone he feels could/will come in and hit the ground running he’s probably gone, assuming we don’t win out.

I’m torn for a couple of reasons. It takes time to turn the devastation around. We do have some decent young players maturing. The buyout is high. Not sure what the cost would be for letting go all assistants.

That being said. Losing to San Jose state is unforgivable. He loses this week and that might tilt my leaning. He needs a substantial staff overhaul. Chavis , God bless him hasn’t performed at his last two stops. Absolutely need a change on defense. Offensively, I am not a fan of craddock but he and morris are good friends. Probably the entire offensive staff other than lunney are his hand picked crew. The qb carousel for two years is insane. The question for me on offense is, Will morris make staff changes of his own choosing for the betterment of the program, or does friendship mean more than our success.

I wouldn’t mind keeping him another year if a major overhaul is made staff wise. If we go into next spring w same staff and get same results, then he should have be let go ASAP.

This has gotten very ugly and I would like to say CM needs to go but starting over has so many negative consequences which makes me believe that there are better solutions. First and foremost the question that has to be answered is what is best for the program. Firing the head coach and most likely the assistants will severely impact recruiting and may cause some of the current kids to hit the transfer portal. Recruiting is still vitally important and this team needs talent more than anything else. If a coaching change is made odds are that the recruiting class will take a hit and I just think that would be a disaster for a program that is already razor thin on talent.

The other obvious reason not to change head coaches is the total waste of money that would be required to buy him out. Another buyout in such a short period of time is just hard to swallow and if they are not willing to up the amount paid then I am not so sure they find anyone better.

There are multiple reasons to do it but the question was why you don’t do it and that is my answer.

f beating a team that Arkansas State Teachers College beat on the road is enough to give Morris another year we need to quit pretending at SEC football and join CUSA.

I don’t think anyone is saying that. Beating WKU is a must, but isn’t likely enough. If we beat both WKU (likely, I hope) and MU (unlikely, I’m sure), then I believe it’s better to give him another year just to be certain he can’t turn it around. Let’s not pretend there are no risks associated with letting him go. There are. It’s just that most of us now believe the risks of keeping him outweigh the other risks.

Understood - my post is directed to folks ( there are many) that have said as long as they go 3-9 he should get another year.

I don’t see beating WKU as being an accomplishment of any note. UCA with 65 scholarship players beat them on WKU’s field.

Beating them should be a given.

Unfortunately the time to correct this was before he was hired, as it turns out.

I remember one of the pundits on sports radio (don’t remember his name), think he was a guest on Bo’s show, said “you don’t want that guy as your head coach”. He cited several reasons, that were based on some statistical analysis that he does. Don’t remember all the details, but he was ADAMANT that Morris was a horrible hire.

I have to admit I got excited about Chad when I saw the recruiting, and thought the guy might be wrong. But turns out he was spot-on

I feel pretty much sick with any of our options at present, honestly.

He’s got to win two out of the last three to have a shot at staying, IMO, though if he does stay there will probably be a new DC, and maybe a new OC.

You are referring to this guy. 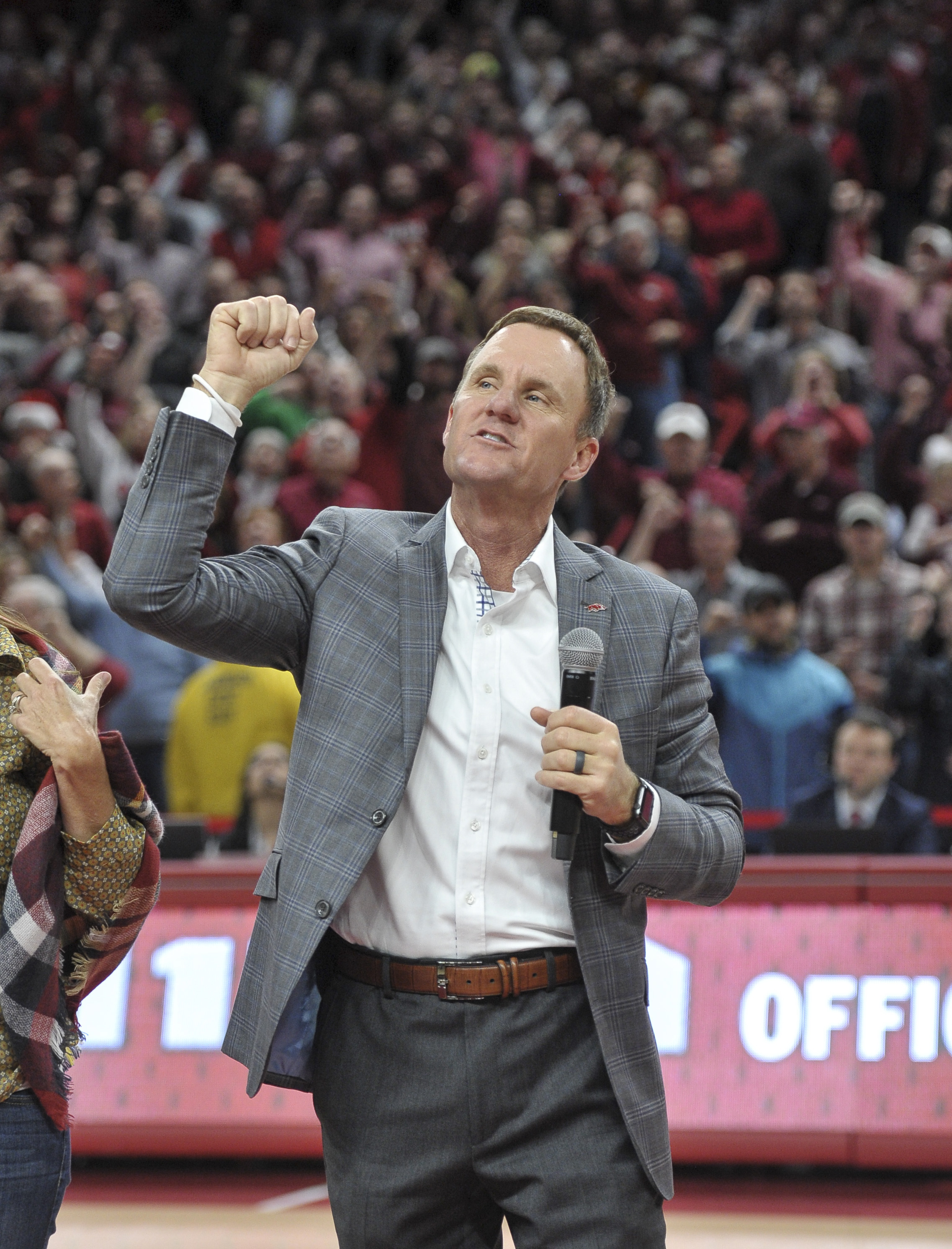 LISTEN: Analyst explains why he doesn’t think Chad Morris will succeed at...

Not everyone is on board with the first-year Razorbacks coach.

But in fairness, note that he mentions how things were awful the first two years, and then “took off” in year 3.

I know if I were the AD I would feel rather helpless at this point.

I’m on board with giving ccm more time. I hope we keep him but see a new dc. I’m impartial on the rest of the staff. Honestly, at this point I don’t care much about the season record. A 3-9 season presents better but at this point it’s about seasoning the youngsters for next year and presenting to the world a team that’s having fun (if possible) in hopes of keeping/improving the current recruiting class.

Like I said in a previous post, I think he had a plan this year to gap the qb position with the two grad transfer he got (he wanted the Missouri qb) in order to build depth on the team knowing that a 4-8ish season would keep things trending positively and allow him one extra year to build his team. Unfortunately, his plan didn’t work out. I think it was a bad plan and he should have made this qb move much earlier, but it was a plan. (Sidebar…I got so tired of hearing this particular qb knows the offense better so he gets the start. Problem, he doesn’t have the talent to run half the plays, who cares if he knows them. Play the kid with the talent to run the complete offense and then mature him/build knowledge along the way). Anyways, back to it, complicating the matter is ccm got no help from the defensive side of the ball. I know it’s conspiracy theory ish but it’s the only thing that explains completely missing the talent he had in the third/fourth string qbs. So for me, ccm had a bad plan that didn’t work out. Own it and move on.

Best case for me at this point is HY comes out publicly supporting ccm and the team and ccm makes a move at dc.

The way I look at it, as I hope others would, is to take a note from what happened this spring. CMA was not living up to expectations after being here long enough to get his players to run his system. Once it was clear the ship wasn’t being righted, rumor has it that HY stepped in and gave CMA a choice: switch up your staff or head out.

I say all of this because Arkansas needs some stability. We need more talent. We need speed. We need Texas recruiting. Chad seems to be pretty good at that aspect of his job. He also seems pretty excited to be in Arkansas doing it, because he left a job in Texas for it. Despite questionable decisions on the field and with QBs, he is the exact thing we should hope for from a potential suitor, should HY decide to can him.

His system relies on consistent QB play. He brought in two grad transfers because he knew one wasn’t good enough for the SEC west and one wasn’t going to be quite ready to play. Turns out, neither of them were ready. However, I am frustrated he didn’t turn to his other QBs sooner.

Lastly, he is playing a serious amount of underclassmen. And this goes back to his recruiting. He can get talent here. We need to find out if he can continue to develop the talent. That will win him more games than playcalling ever will.

I’m not happy with the state of this program. I’ll be even more upset if we lose to WKU. But I’m good with keeping CCM so long as he agrees to let the dead weight go, which is almost inevitable at this point. It’s the best decision for the longevity of this program.

Two questions here: Should CM go (probably yes, especially at 2-10) and can we afford to fire him (remains in doubt). Bielema’s lawsuit is a very big deal in this equation. Even though I think we’ll win it (volunteer coaching at NE is not making a good faith effort to find employment), it ties up both time and money until it’s settled.

I can see a scenario where they keep him, Chavis and Craddock are both out the door, CM takes over playcalling and they go hire Venables or someone similar as associate HC/DC at just about HC dollars to fix that side of the ball. But that kind of scenario is what it’s going to take for him to stay unless the PTB decide we just can’t afford to fire him now.