Anyone else watch that!! That was insane. Some serious consequences need to be handed out.

At one point a Kansas player picked up a chair to use as a weapon!! 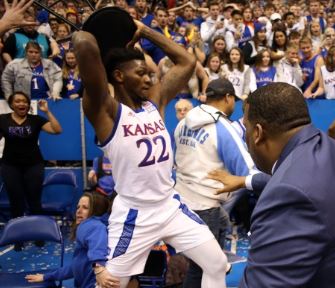 Sorry, no excuse or reason can cover that. As far as I’m concerned he’d be done for the season, maybe done at the institution as well! He picked up a char to fight with!! That could be considered a deadly weapon!! Fortunately he was stopped before he could use it! Wow!!

If you haven’t seen it here is a link to a story about it:
https://www.msn.com/en-us/sports/ncaabk/ku-k-state-players-brawl-in-seating-area-behind-basket-at-end-of-jayhawks-victory/ar-BBZcp6z

Wow, beyond ugly. There were fans in wheelchairs in the area of the fight. It will be interesting to see the consequences.

Yes it is classic thugs on a D-1 scholarship whom are getting paid.
Bill Self made a statement after the game and said after he watched the tape there will be disciplinary measures taken! I just wonder if those suspensions will be without pay!
It will be a huge lift to Tennessee that’s the Kansas opponent in the SEC / Big 12 challenge.
It was uncalled for and I think the Big 12 conference and the NCAA should take action. Those involved could face legal action as well! I’m supposed the police officers on site didn’t arrest a few of those players!

Look like a big bunch of nothing to me. These boys better stick to hoops, fighting ain’t
their thing. Big Wow.

Just a bunch of punks!

Sometimes you get what you pay for.
Also agree they better not change careers to MMA.

Bunch of nothing! are you kidding me!, you could have had people very seriously hurt! needs to be multiple game suspensions and fines handed out to both teams,This type of incident cannot be condoned and tolerated…The player who mostly certainly was going to slam somebody with the chair should through for the yr. They need to use these 2 teams as examples and punish severly enough to where every team knows this will not happen again.

Thank God someone got that chair out of his hands, that could have really been ugly. Not that it wasn’t historically ugly to begin with. man, that KU program is truly a dumpster fire. Shame on the NCAA, they really should not even have their coach or a team this year, for that matter.

A KS journalist said it best, “the Kansas players should be suspended without pay”.

It appears Self was not involved, so at least Jeff Long doesn’t have to deal with another coach in a neck brace.

I thought you played ball? And you don’t understand how this could happen between two instate rivals?
I’m not condoning it, there will be and should be punishment, but it has happened before and it will happen again. “Mercy”

Yeah I played and there have been incidents but what happened there was far worse than 99% of them. That’s what I’m talkin about, there needs to be severe punishment handed out to let everyone know this will not be tolerated under no circumstances!!

Dude… that guy picked up a chair and you could see in the video he was moving forward to use it before someone took it away from him. He had the deadly weapon picked up… he had the intent to use it… he just got stopped before the final blow. That’s not business as usual in any rivalry I was ever a part of at all. That guy need to be done!! PERIOD!

That type of behavior/mentality has no place in the game. And oddly he was the one that started the whole thing. After he blocked the shot he stood over the guy laying on the floor taunting him.

Guess what guys? There was an incident w Muss Reno team last year towards the end of the season. Nuthin’ happened but it could have, it was close. High emotions to win a game vs rival and young men can lose it and make bad decisions. Heat of the moment. It happens. You always regret it afterwards, but too late! The incident I’m referring to can be found on YTube.

I think Silvio De Sousa is probably either going to be kicked off the team or be handed a big suspension. He instigated the fight by standing over the K-State player, threw punches and picked up the chair looking to hit someone. Fortunately someone pulled it away from him.

He picked up a chair with the intent to bash someone with it. That’s not " NUTIN’ " nor is it any where near what I’d call “letting off steam”. Sure, if it was all just fists, I’d say yes we’ve seen this before, get a few reprimands miss a few game nothing else to it, but it wasn’t. HE PICKED UP A CHAIR AS A WEAPON WITH INTENT TO USE IT!!! What if no one had grabbed it from him and he bashed some poor kid or bystander with it? That is a path NCAA basketball should never have to walk down and never have to hand out consequences for… EVER!!!

Paint that any way you want, its so far beyond ‘no big deal business as usual’ that it’s ludicrous to take that position.

WHAT IF? What if a frog had wings?

Just forget it brother, this is the 1 person out of a 1000 who could look at that and not see anything wrong with it… pretty sad.