I think one thing that is probably evident with NBA folks is they see great potential in Jaylin as a shooter, a big who can at least pull forwards away from the rim. Theoretically he doesn’t have to return to school to improve in that area. Bring him into your franchise then he’s got time (no classes to get to, etc.) and top-tier resources to develop.

I always try to have a balanced viewpoint with kids and their decisions, but I think this will be at least a short-term mistake by Jaylin.

Yes, he’s not going to significantly improve athleticism and explosiveness by coming back, but he can definitely improve his perimeter shooting, perimeter defense, low post offense and ball handling. I think all of those improvements could make him a sure-fire first rounder vs. where he is now.

I continue to say the best comparison for him is Al Horford. It’s a really close one in my opinion.

Hope the best for him, but I’m disappointed as a fan he’s not coming back and think it’s a (short-term) mistake.

Could end up costing him millions.

I’m really surprised how many people think this will cost him millions and hurt his development. He will definitely get paid more next year as a pro than by an NIL deal. And he will be eligible to renegotiate his second contract as a pro sooner. And he will absolutely develop his game quicker playing professionally than he would playing in college. Yes he could develop his game with the razorbacks next year, but it is really really hard to push yourself the same and imitate the competition, skill and ability levels you see going up to professional competition. Do we think Bobby Portis would have developed as much playing two more years for the hogs as he develops his first two years in the NBA? Or Moses even tho he was in the g league mostly this year? No way man. You get elite coaching and training and competition every day in the pros. If you can get a spot on a roster and be involved with those training camps and daily practices with an nba team then you definitely have an advantage over everyone playing in inferior leagues and especially over kids going to school playing at amateur levels. If the question is lifetime earnings and best path to getting an elite multimillion dollar nba contract, then being in the nba right now is the obvious answer. Question: when’s the best time to plant a tree?

I agree with most of you said except I am not sure if it is a net gain in earnings if he stays or not. Net gain if he stays, assumes that he will improve his draft status into the first round. And that is where I have doubts, meaning whether he can really improve.

Bottom line there are a lot of ifs.

I’m not sure his NBA earnings next year will match some of the NIL numbers I’ve heard thrown around…the numbers are substantial.

I’m really surprised how many people think this will cost him millions and hurt his development. He will definitely get paid more next year as a pro than by an NIL deal.

As PJ posted, Jaylin, if he returns, would need to make significant improvement this coming season to improve his draft position as a Junior. Age is important to NBA draft spots. If an NBA team likes 2 players equally and one is a Soph and the other is a Junior, they will take the sophomore every time. Same goes in all classes.

Timme, at Zaga, is the perfect example of this. His draft spot has dropped every year since his freshman year. And, he has been a GREAT college C/PF, but hasn’t improved significantly in shooting or athleticism, that the NBA is looking for in a Big…

I’m not sure his NBA earnings next year will match some of the NIL numbers I’ve heard thrown around…the numbers are substantial.

If JWill is drafted in the second round, makes an NBA roster and sticks there all season, which is not a given (see Moody bouncing back and forth between the Dubs and Santa Cruz in the G League), he’ll make just under a million dollars. I’m hearing some definite seven-figure numbers in NIL if he comes back.

Out earlier today from CBS sports. 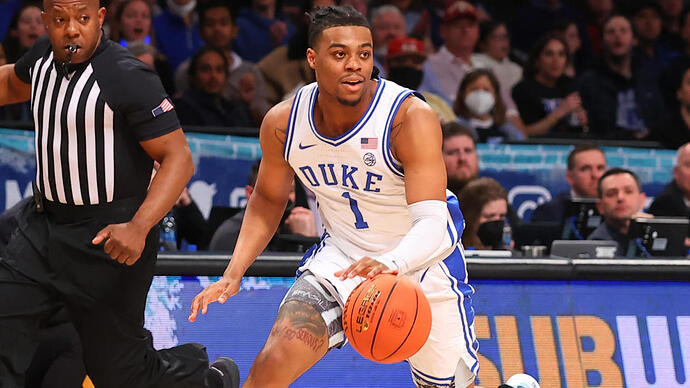 Dribble Handoff: Trevor Keels, Drew Timme among those who should withdraw...

I don’t think he’s coming back. Or Muss has a tough and possibly an unpopular decision if he does.

I don’t think the calculation is so much single year NIL v. NBA second round money. It’s more a question of how much money JWill can earn and how soon before he finishes an NBA rookie contract.

By going now he is unlikely to get first round money, but he finishes the rookie contract quicker, and gets to his second, likely much more lucrative, NBA contract. If he stays, he gets NIL money this year and a chance to get a better, maybe much better, rookie contract-but he still will have to grind through the rookie contract when he signs in 2023. Which option is more likely to produce more dough in the next few years?

That assumes he gets to the end of a rookie contract. Which is not a safe assumption either.

It would be interesting to know how many of the second round guys who actually signed in 2018-2020 are still playing in the NBA on those contracts.

He makes the most money by staying AND having an All-American season leading the team to the elite eight / FINAL FOUR. I’m not saying that is the RIGHT choice for his situation…jus’ sayin’

There were three players drafted in the second round in 2018 who never played in an NBA game. How many of the other 27 are still in the league, I don’t know. I recognize a couple of names (Gary Trent Jr. and Jalen Brunson) that are still around. Giannis’ little bro played a few games over three years and is now playing in France.

Isn’t a rookie contracted guaranteed for draft picks? Free agent rookies are different but I thought draft picks had a guaranteed 2 year deal with team option in year 3. Anyways I still think that 3 years from now he is much more likely to have developed his game to be a sought after free agent commodity if he’s been playing professionally the whole time. That experience is invaluable for player development I mean it just doesn’t compare to college. Now what everything I’m saying assumes he is guaranteed to be drafted. I don’t think it matters if he’s a second round pick like Isaiah joe or first rounder like Bobby or Moses. You get drafted you get to practice with an nba team every day and that’s the best preparation for a future in the nba possible.

Upon further research 2nd round draft picks aren’t guaranteed a certain contract structure but here are the contracts that last years second round picks got, for those interested https://www.hoopsrumors.com/2021/08/2021-nba-draft-pick-signings.html

2nd round picks have NO guarantees, and I saw a mock today that didn’t have JWill being drafted at all.

Interesting stuff in that link. There seems to be a whole lot of room for negotiation for second rounders with a lot of two way contracts and a whole lot of variance in guaranteed money.

would be interesting to know how many of the second round guys who actually signed in 2018-2020 are still playing in the NBA on those contracts.

Gafford and Joe were second round picks during that time and are still in the league. So JWill has that example close to home to lean on,