Jones in midst of most consistent run at Arkansas

Heading into Wednesday’s game at LSU, Mason Jones is in the midst of his best, most consistent stretch at Arkansas. More on what has keyed his run, and a few interesting shooting figures: 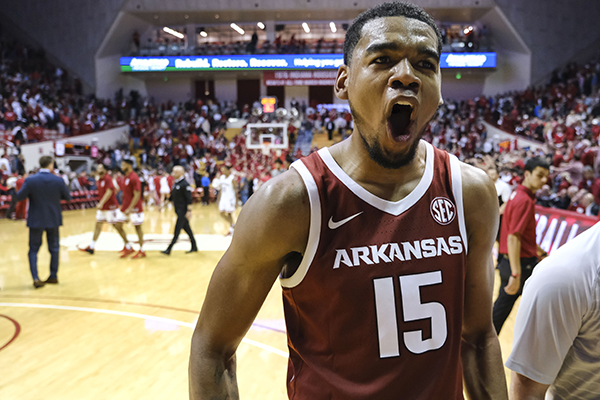 Jones in midst of most consistent run at Arkansas

Mason Jones views the loss at Western Kentucky as something of a turning point in his season, and the numbers back that up, too.

One of your best!

Mason Jones is in the midst of his best

Well, he’s only played 1 1/2 seasons of P5 ball, and he’s on his second HC during that time…I guess his third since his Juco time. We’ve seen how the continuous coaching changes have greatly hampered the Hogs QBs, yet Mason seems to be showing continuous improvement through something similar.

Thanks, guys. I remembered a tweet from Mason around mid-December that read he wished people had a better understanding of he and Musselman’s relationship. I wanted to know what he meant and how their bond has helped him. Mason has been a good interview all year, and was again today.

Great read… thanks… There’s a lot of pressure on Mason and Isaiah because they have to score about 40 a night for us to have a chance. They have been pretty consistent and hopefully they can continue to play as well as they have.

Scottie, love the article, my take on state of Mason’s mind.

I believe he is one player, if not the only one, who was glad to see Anderson get fired.

Mike does not like to play anyone more than 30 minutes because of the tempo he wants to maintain. Early in the year, he started both Joe and Jones, but in his substitution rotation he often found himself having both Joe and Jones on the bench and the scoring stopped. So, he decided to bring Jones off the bench to provide that instant scoring off the bench and also always have a scorer on the floor. I don’t think Mason ever appreciated that. He had been an unhappy camper ever since until Mike got fired. You could see that in his tweets.

That is the downside of Mike’s system and that has hurt his recruiting no doubt. Because talented kids want to play and be on the floor. They want their name announced as a starter. They don’t like sitting on the bench. Darryl Macon went through this spell of unhappiness in his junior year when Mike wanted one of Barford, Dusty and Macon to come off the bench.

I believe that is one of the reasons, Joe, Jones, Bailey, Sills are happy campers right now and love Mussleman and his 7 man rotation. They love not being taken off the floor at the 16 minute mark in the first half.

The flip side of that is next year, if Joe and Jones come back, as I said it is going to be interesting to see how Mussleman manages some of KK, Davis, Sills, Moody, Harris and still maintain a 8 man rotation. I don’t think he has ever had this much high talent on the roster at the college level.