This takes into account who is staying in the draft and who is not. He has details on the rosters for all 45 teams. Just don’t appreciate where he has Arkansas.

On the other hand, #34 would be a 9 seed. There have been too many years lately we’d be thrilled with a 9 seed.

He has us where I expect. To me, there are to many unknowns (10 new players).

Although, I disagree with his starting five. I would be absolutely stunned to see that lineup start the season.

IMO, he has at least 4 right, and has pretty good odds of having all 5 right.

I would say that’s fair although I would have Arkansas in the top 30, 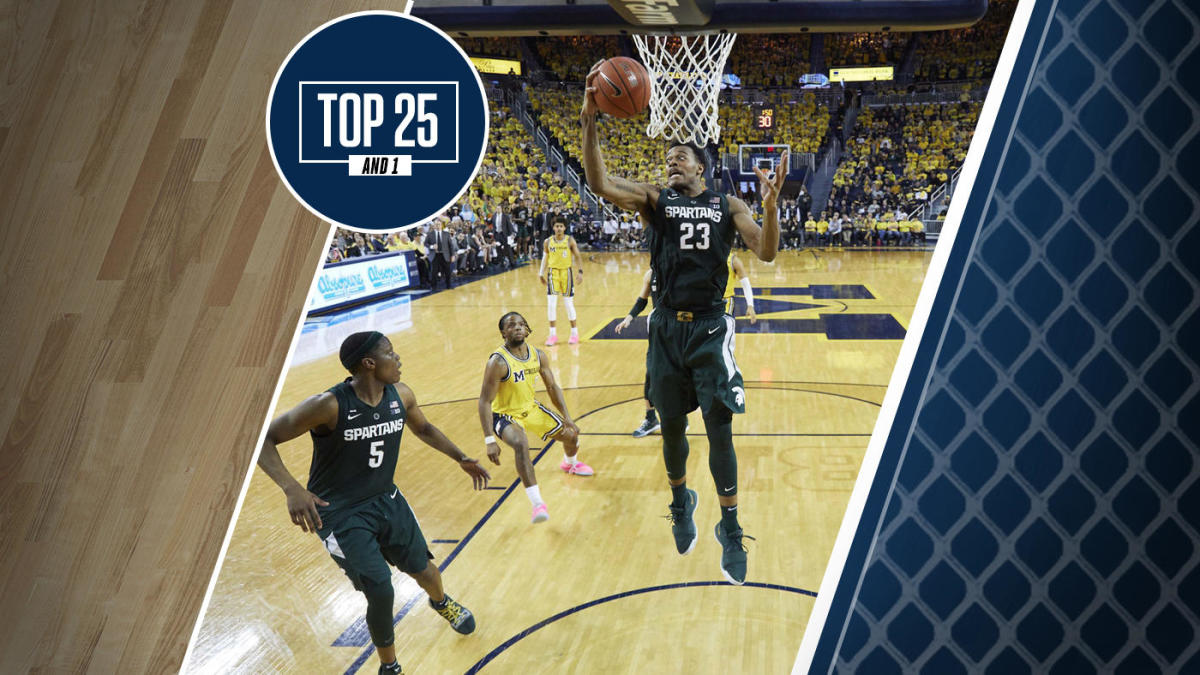 With the loss of Tillman, the Spartans fall to No. 11 in the Top 25 And 1 preseason rankings

I like where he has Arkansas, but you are right about him underrating SEC.

Rothstein is trash. Pretty sure Muss will put hacks like him and their rankings on the bulletin board. I would. The only way for us to get respect is to take it, and I like our chances to do just that. We haven’t had this much pure talent 1 thru 13 in a very long time.

Jeremy, I agree that this team has the most talented players since the 90’s. While Coach A had some good teams, his teams never had the quality depth to be a dominate team. This team appears to have it all. Size, skills, good outside shooting, and plenty of size to rebound. Miss and his assistants will have a lot to work with. It will be fascinating to see all the different groups that he will be able to play depending on the opponent. I expect that the non conference games will showcase the versatility of this talented roster. We just need to get the Covid behind us.

25 to 35 is about right for the Hogs at this time. There are just too many unknowns. I do expect to be better than that at the end of the season, but who knows. I am certainly looking more toward this season than any since the mid 90s. They have talent and they have coaching. that is a good combination.

As long as we’re sweating Seeding and not inclusion on Selection Sunday, I’ll consider it a positive step forward even if we’re not ranked in the top 25. Eventually, I see us returning to an annually ranked status.

As long as we’re sweating Seeding and not inclusion on Selection Sunday,

I just hope there is a Selection Sunday

Miss and his assistants will have a lot to work with.

I’m glad to see I’m not the only one autocorrect does that to. (Changing Muss to Miss, Irritates the heck out of me).

And no this isn’t a dig, just complaining about autocorrect. As many times as I’ve wrote Muss, it still does it.

You and me both

Hello, Rice. I am afraid that if we have basketball, it will be a conference only, 26 game schedule. I’ll take any hoops I can get, even if it means no non con. I literally have nightmares about there being no Hawgball this year.

I normally catch the auto correct and fix my posts. This time I did not. Hopefully, I will do better on my next attempt.

I really hope that we will play as scheduled but this year I would take a home and away all conference schedule. I just want college basketball to be played this year.

If there is an attempt at a college BB season, it will most probably be after first of the year. After monitoring the virus spike the could occur during the cooler weather. Doesn’t look promising now, but we can hope for the best and a vaccine.

We can’t keep kicking the can down the road waiting for a vaccine that may never come. At some point we have to leave our comfort zones and start to live and do things again. Covid may be here forever. We already cancelled a college baseball season that could have been played out without fans. Where does it end?

Easy for us fans to say from afar. Not our heads, jobs, universities on the line.
Hopefully we play (I’m as hungry for it as anyone), but hope it’s not at the expense of an athletes and/or staff members career or life.
The can will get its last kick then.