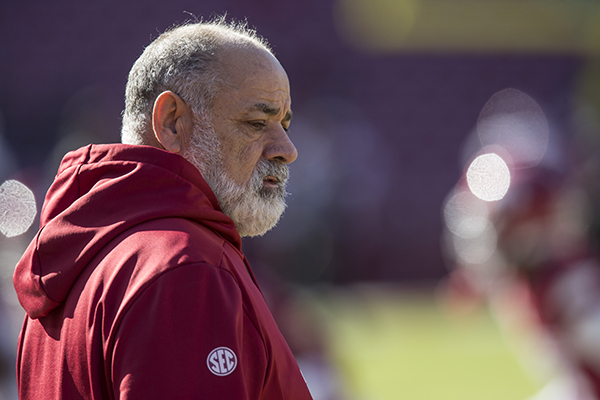 Former University of Arkansas defensive coordinator John Chavis has been hired as an assistant youth football coach, according to the Knoxville News Sentinel.

Upgraded his talent base

Damn…finagled his way into yet another position he’s under-qualified for.

He’s set money wise. I would imagine this allows him to be semi-retired and stay in the game without the pressure.

Too easy to take a cheap shop, so I guess the intro in Matt’s post says enough!

I hope he’s enjoying life. Got nothing against the man at all.

I think his semi retirement started about five years ago

All the best to Coach Chavis. I’ll bet he will have a positive impact on many middle school kids.

I see he’s an assistant youth coach. I’ll bet he’s working for a better head coach than the one had the last 2 years.

If he is helping shape young kids abilities and lives then you gotta respect that.

I’ll speculate Chavis will teach kids a lot more than football stuff. My Jr. High football coach taught me a lot of lessons on leadership and high expectations. And gave me personal attention (tutored me in Algebra after practice) even though I was too small and slow to play a lot. He made a huge difference in my life. Hopefully Chavis can be that coach to some of those kids. In middle school that means more (long term) than any football coaching.

I hope he’s enjoying life. Got nothing against the man at all.

In general, NEA, I feel the same way.

My problem with him is that it’s become pretty obvious he just was cashing a check with us…and probably with the Aggies before us. I have a problem with that.

I’d be the first to admit that our overall talent was not at the level of the rest of the SEC during his two years here. But when I read/hear that other coaches were saying they didn’t really have to prepare much for us because of schemes were SOOO vanilla. and then I look at the result on the field…and I honesly don’t know what he was doing those two years.

I was excited when we announced him as DC 2 years ago. I knew what his defenses had done in the SEC, and I was more than willing to give him a mulligan for A&M (and their sorry defenses when he was there for 2 years). I thought with all that he had seen and done - in the SEC! - he’d at least get us lined up right and get good effort out of the kids. But what i saw was the absolute worst defenses I’ve EVER seen in a Razorback uniform…and my own opinion was that it wasn’t ALL about the talent level.

I don’t wish the man any malice, but I’m VERY, VERY glad he’s no longer a part of our coaching staff.

Didn’t he sue LSU while he was still working for them?

It’s possible he was in it for all the wrong reasons.

I got to know John Chavis pretty well back in 1990 when he was recruiting my TE who eventually did sign with them… He’s a great guy but I knew by the way his defenses played his last couple of years at Texas A&M but he had no shot at success here given what he had to work with… I wish him all the best.

Are you referring to the talent level on the team or the lack of competent coaching leadership, specifically Chad Morris?

What I was referring to as I knew we had a very young secondary and John really only knows one way to coach and they had really bad numbers with better talent at Texas a&M and got toasted.
The truth is it was a hot mess under CCM because the offense was so terrible he put the defense in very bad situations