Jersey numbers for next season

Makhel Mitchell has been No. 22 at Maryland and Rhode Island, so I suspect he is 22 here.

Makhi Mitchell was No. 21 at his previous two schools and that number was taken.

Love the talent he’s put together for this season. It would be over the top talent with JWill. Maybe one of Kamani or one of the Twins can jump in there. One special skill Kamani has is rebounding. He was actually our best rebounder per minute played. Just has to hone some offensive skills.

We’ll see if Muss actually breaks down and rotates more than 7 at crunch time. I don’t think he’s ever had a college team with this much talent so this could be the year. Best I can tell from his NBA time he used 9-10 most of the time.

Best I can tell from his NBA time he used 9-10 most of the time.

Yes, but the 8 more minutes a game and an 82 game season almost mandates that. But, I think you are right, if he’s ever going to do that in college, it will be this year,

Not sure which one of those would guard a big, like Timme coming back for his 23rd year. Is Brazile strong enough for that?

I expect the European mini-tour will not tell us a thing about what happens in January, everyone that is healthy will get some chances. It will be interesting to see the size of the rotation against the better opponents in non-conference.

First, no one player is going to stop players like Timme or Oscar at KY. You rely on your help defense and try to contain them. When we play KY, we’ll probably use Brazile and Graham and go with the bigger line-up a lot of the game. Maybe send Kamani in a few minutes each half to lean on him.

It will be interesting to see the size of the rotation against the better opponents in non-conference.

We’ll get good early non-conference tests in Hawaii this season. Some very good teams in that tournament. Our freshmen will have to get it together early this season.

First, no one player is going to stop players like Timme or Oscar at KY.

True, but you need somebody that is not going to get manhandled before the help ever arrives.

True, but you need somebody that is not going to get manhandled before the help ever arrives.

Honestly. I’m not really worried about that. Both Timme and Oscar had monster games against us last year (25 and 30 points respectively) and, because of great coaching and overall team defense, we beat both teams.

This team is more talented than last season’s and we know Muss has an intricate plan laid out for every team we face. Obviously that plan for those 2 games did not including shutting down either Timme or Oscar. 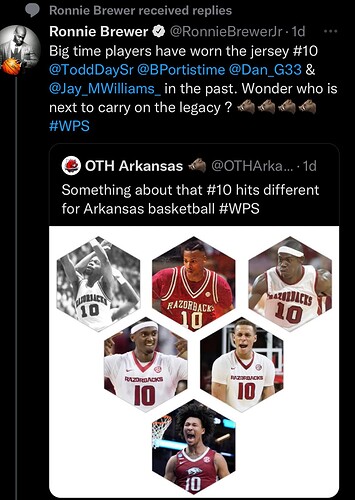 Conspicuously no #10 on the roster now.

A referee calling a straight game can go a long way with Oscar. I understand he is talented but last year his table was set with more than a few home-cooked calls. You are correct about the use of Kamani. It is too bad that he has not experienced a growth spurt. A couple of inches might open some doors down the road to go with a big heart.