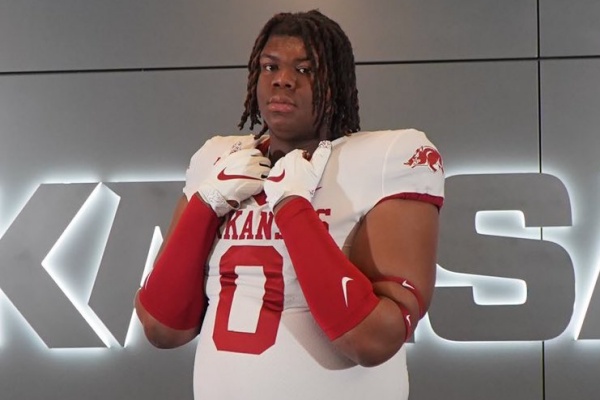 Arkansas and SEC fans know what it’s like seeing KJ Jefferson plow over defenders, and one of the top offensive linemen in the nation saw it firsthand during a practice.

Who was the poor linebacker he ran over LOL

APPARENTLY Jefferson got here too late to see the B. Pool-KJJ collision a couple of days ago that sounded like a draw. So, I’d like to know who the LB was Jefferson refereed to, as well.

Yeah I would think Bumper Pool and Drew Sanders are not the two guys he ran over LOL.

FWIW, I know people often ask about legit heights and weights. His dad told me he was measured 6-6 3/4 and weighed 349 at a Sunday camp. I believe it was a Under Armour camp. 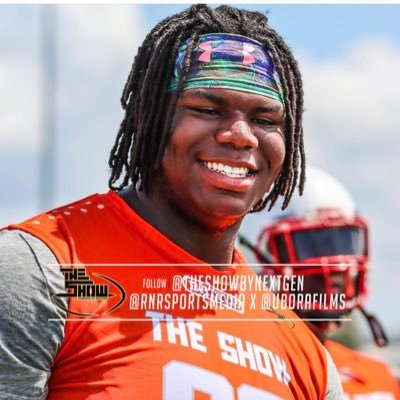 No surprise here. Arkansas in his top 12.

I am one who is probably a little OCD about LEGIT HT/WTs, but I am not gonna apologize for that. Wish we could get that for all of the players in football and basketball (knowing full well weights fluctuate a fair amount during the season). Thanks for your input on Miles.

I am one who is probably a little OCD about LEGIT HT/WTs, but I am not gonna apologize for that. Wish we could get that for all of the players in football and basketball (knowing full well weights fluctuate a fair amount during the season). Thanks for your input on Miles.

I get that. I do, I just know how the heights can fluctuate from camp to camp and college visits.

Every year I hear from kids and parents saying this school measured my son/me 6-5 and the next camp/school measured at 6-3 1/2. I’ve heard measurements that have differ as much as a couple inches or more.

Pretty sure I saw the collision being mentioned. It was KJ and Bumper. In that situation, Bumper is in a strange position, because he can’t hit KJ. He’s allowed to touch him or thud. But it was at the goal line, so there’s some pride involved. I remember seeing them go back and forth with each other once they came off the field, all in fun.

Could very well be another hit the kid is talking about. But this one jumped out.

Yeah when I first heard this I thought …wait a second they’re not allowed to hit the quarterback!! What was he doing trying to truck somebody!so probably bumper if it was him was coming up in a position to possibly thud KJ and KJ took advantage of that and run over him LOL.

Wasn’t a deal where Bumper was bowled over. I think KJ just followed through with the contact a little more than he expected. Great sign that those two guys laughed it off together.

You may very well be correct. I just didn’t think McVay was on campus yet for particular practice.

Thanks for your input, Richard. I just remember that when I was measured by my HS coaches, I always came in at 6’2 and 1/4"…same thing at 2-3 Dr.s offices for the next several years…never any deviation. Now, at my shrunken age, 6’ to 6’ and 1/2" is all I can muster…depends on my flexibility on measurement day, and just how straight I can stand!