“As a head coach I was sitting back there going, ‘I’m damn glad he’s our quarterback,’” Sam Pittman said.

On KJ Jefferson’s spring game and showcasing improved accuracy with his deep ball: 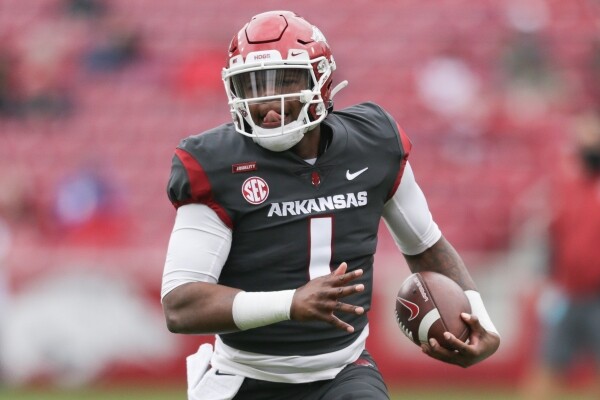 In one half, KJ Jefferson put on display an improved touch on passes down the field Saturday in the Razorbacks’ spring game.

I thought both QBs played well, Hornsby has to work on his decision making but he’s got a cannon and can absolutely fly. KJ put the ball nice and high where it needs to be on those deep throws. The # 1 secondary, now that’s another story…

We sat right behind the red bench. Hornsby showed good leadership on the sidelines IMO. TJ Hammonds was all over congratulating good plays. Hornsby was also encouraging Coley in the 2nd half.

That’s always the problem in spring games. Whenever somebody does something good, another one of your guys probably did something bad. I thought the secondary got better as the game went on. I also think that this group of receivers is good enough to cause a lot of trouble for SEC secondaries, especially the way Jefferson is putting the balls out there for them.

I like that they’ve apparently coached/convinced Jefferson to not be afraid on longer throws to put it out there and let those big receivers go get it either by running under it or winning contested balls. Knox, Woods and Burks all showed that works well. A couple of the frosh receivers flashed a little bit too.

I am still a bit concerned about TEs getting open.

I caught the last series after the baseball game. Blake Kern was wide open down the middle for what would have been a touchdown, but Kade Renfro overthrew him by about six inches. Of course, once again that means the defense didn’t cover him.

I thought JSJ with his one turn at QB was the most efficient one of the bunch.

I like JSJ. Been watching him for years. His arm
seems stronger, maybe a lot stronger. Quick release. Seems to always know where to go with the ball. But he’s small. And he was playing against the 2s and 3s. That said, I saw him win enough in HS to never, ever count him out.

Watching from the sidelines, thus missing lots of details, I thought the best thing I saw was what the #1 red defense did in the 2nd half after their not so good 1st half. Hopefully, what I saw in the first half was caused mostly by great play from the #1 white offense. I did notice multiple great plays from our WR group. Yes, I saw you David White. Oh, and I also did not miss those terrific deep passes KJ.

I’m going to watch the re-run of the game on SEC+ today to see lots of plays I missed yesterday.