“Whenever we need a bucket, just throw him the rock and he can make it happen."

JD Notae has scored 15+ points in the second half of Arkansas’ last 3 games, including 17 vs. Abilene Christian on Tuesday. More on his performance: 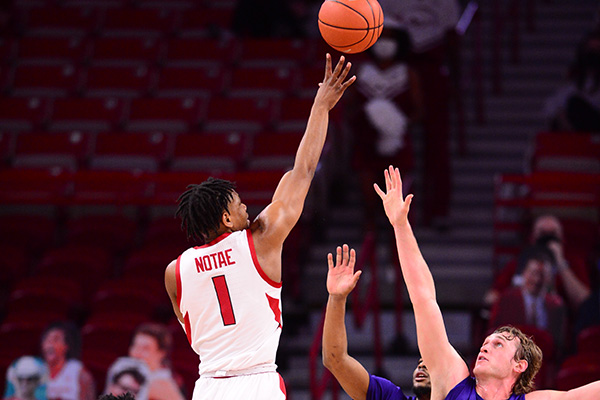 Eric Musselman has said junior guard JD Notae is one of the best instant-offense players in college basketball.

He’s a Great offensive player! We truly are a different team when he’s on the floor especially with Moody and Sills

Better scorer than a facilitator of the offense.

I think he will probably get better at running offense as time goes on, little out of control and passes ball too hard at times but he is quick.

This is what I’ve been talking about. He’s pretty raw, but he can go get a bucket in a pinch. It will be interesting to see whether he gets a feel for the the nuances of the game.

But, he has the ability to take over games and I think the last few have shown that he will be one of the primary guys they look to when they need crunch time points.

I’m amazed that even though he was the star in the second half we lost the second half. Is he helping us when we need it or does our offense become stagnant and our defense suffer. Scottie what are the efficiency numbers with and without him in the floor.

Basically ACU shot 57 percent after halftime and we shot 36 percent. That’s why we lost the second half. I thought we had some good looks after halftime that didn’t fall; fortunately JD knocked down three triples when we needed them.

Arkansas is plus-121 with Notae on the floor this season.

Arkansas is plus-121 with Notae on the floor this sea

Do you have the rest of the players’ plus/minus stats handy? So we can have a frame of reference.

Do you have the rest of the players’ plus/minus stats handy?

Everyone has had a game of either single figure +/- or negative. Moody and Tate have one each, everyone else two or more.

Since the MVSU blowout, Jackson actually is minus-5 in those seven games, with three minus games in a row before yesterday.

Everyone has had a game of either single figure +/- or negative. Moody and Tate have one each, everyone else two or more.

Thanks SF. About what I expected. I did think Tate would be second and Vanover would be sixth. I called myself looking for these on the UA web site, but somehow I missed them.

I love JD’s shoot first attitude. That is what scorers are. They believe they can score better than the player they could pass the ball to. They think they can score from anywhere on the floor. The man has swagger and confidence and plays without fear

There is no doubt the three players that you want on the floor at crunch time are JD, Desi and Moses.

There is no doubt the three players that you want on the floor at crunch time are JD, Desi and Moses.

Tate has a better shooting percentage. JDs numbers are below those of Sills and Moses.

Scorers will usually have lower percentages than occasional shooters like Tate. Who would you want to shoot when we are in a must score situation late in the game?

So when someone points out that Smith has a bad half and has struggled at times to finish at the rim this season it’s the end of the world, because it’s a team game and he finished the game, well.

But now, we are parsing super small sample size +- (that so often are dependent on the performance of the team as a whole) on Notae to argue against something that is blatantly obvious—that they are looking to him to create in late game/clock situations?

It’s just dumb, typical, message board stuff. If you can’t tell that’s what they want Notae to provide and that it’s what he has provided the last 2 games, you’re just seeing what you want to see so you can
“win” a message board argument.

“Eric Musselman has said junior guard JD Notae is one of the best instant-offense players in college basketball”.

“Whenever we need a bucket, just throw him the rock and he can make it happen."

Those aren’t my quotes. Those are quotes from the staff (in this thread) that back up my points.

But, sure, break out some +- stats that don’t go to the point being discussed so you can be “right”.

I’m out on these thread and won’t be responding to any predictable response, because the overall point is plain as day.

Notae is raw, but he’s one of the only players they have that they look to in order to create buckets in late game/clock situations and the last 2 games he has come through with 15+ points in the 2nd half of fairly close games when they had bogged down and needed the spark.

How anyone can dispute that is beyond me, but not the least bit surprising.

Good stuff. The only critique I have about Notae is I wish he would dial back the hero ball just a bit. Muss seemed to agree based on his comments during the game. Notae is a solid scorer, no doubt, but I would like to see JD make his teammates better if he is going to play the point.

I called myself looking for these on the UA web site, but somehow I missed them.

I pulled up all eight box scores and added up the totals myself. The cumulative stats on the website do not include plus-minus.

We’re 8-0 with all eight wins by double figures. Obviously closer games, or losses, will change what we see looking at P/M.

IMO. this would be the ideal late game situation (8-12 seconds left in the game or on the shot clock):

The ball in Tate’s hands looking to pass to whoever’s open between Moody, Desi, and Notae. I would have Tate looking at them with the order of preference being as listed. Chances are that Moody, the obvious best shooter, will be doubled teamed. Desi may be open and Notae will probably be open. If it’s close to 12 seconds, the 4th option, if we are not down 3, would be for Tate to drive to the rim if a lane is open.

This may not be Muss’ ideal situation if he thinks Notae is close to as capable as Jones was last year in the closing seconds. He proved last year that’s what he preferred, at least with that team. Notae is probably the one most likely to be capable of getting a shot off.