After reading Dudley’s article this morning, it sounds like Jaylon should be a Razorback. I hope that he does well wherever he ends up, but I hope that we don’t regret passing on him.

Dudley or Richard, is there much interest on the Razorbacks side?

Coach Bolding does not think Arkansas is going to offer because of others that could fill that role in the class.

Arkansas talks to him and Coach Bolding weekly, but just have not offered.

I hope it’s just a “we need to see him in camp” thing. Looking at his highlights, he looks like a player. Start him at safety, but could be a LB. Size, speed and willing to hit, it seems like you can never have too many of those type of players.

I’m sure he’ll have an invite to camp at Arkansas.

Dudley, I don’t know Jaylon’s measurables but the story kind of reminds me of Isaiah Simmons wanting to commit to Arkansas in 2016, (I believe) and Bielema wouldn’t offer him because he didn’t know where he could play him.

Story goes that one of the coaches at Olathe North High School (Kansas) knew the defensive coordinator at Clemson, called him and convinced him to come take a look at Simmons and for young Simmons the rest is history.

Clemson didn’t know where his best fit was either, took a chance, and his first two years at Clemson Simmons played safety, corner back and defensive end. Moved to linebacker his last two years and was Unanimous All American, Butkus Award winner, ACC defensive player of the year and obviously All ACC first team, all in 2019. Helped Clemson win a natty in 2018, for good measure.

Simmons was drafted 8th in the first round in 2020 NFL draft and we couldn’t even find a place for him on the roster.

Ah, the legend of Isaiah Simmons.

There was another legend kinda like that, only a bit different. UA accepted a commitment from a kid and a prominent voice in UA athletics NOT affiliated with this website/message board offered, with a snort I think, “that kid is offered only because of his last name. If he played on a better HS team he might not start.”

Strange things happen between HS and college. Between the SO and JR year, between the JR and SR year. Does the player grow into the logical position? Do they fail to grow physically and are now too slow for the position their size suggests they should play? Is your defense (in these cases) set up for hybrid talent? I remember everyone scratching their heads about Ross Rasner - too slow for safety and too small for LB, supposedly, but he was a wonderful contributor for four years at the hybrid position kind of carved out for Jerico Nelson. 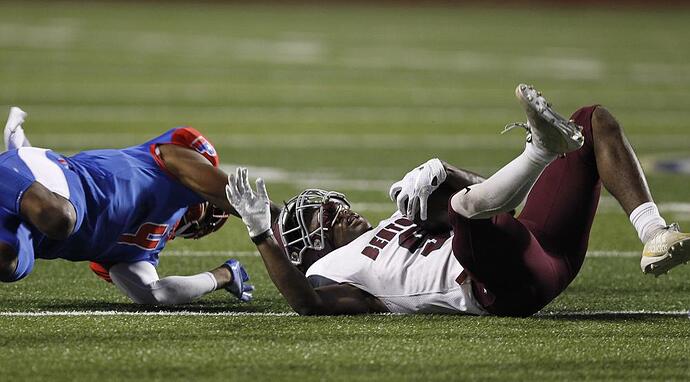 Could the next Isaiah Simmons be a junior at Little Rock Parkview?