According to ESPN Shams Charania, Jaylin has agreed to a four year, 8.2 million rookie deal

Charania works for The Athletic, not ESPN, but yes, that’s what he is reporting.

Truly happy to hear that.

Good for J Will invest it wisely young man

Muss needs to give these guys better advice, right @jeremy?

I said I was happy for Jaylin, and I meant it. You are a duck, dude (dang spell check).

This says OKC used part of their midlevel non-taxpayer exception to sign JWill. Not sure what that means except that it’s not the standard second-round contract. 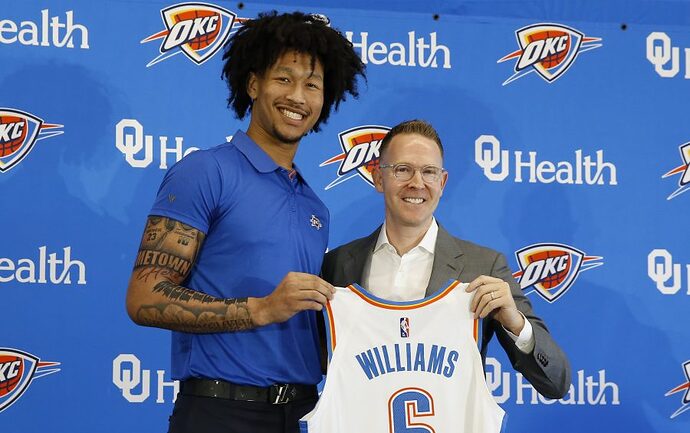 The Thunder have reached an agreement with second-round pick Jaylin Williams, tweets Shams Charania of The Athletic. Williams' new contract …

He’s on the bench to start tonight’s game against Houston.

Not sure what that means except that it’s not the standard second-round contract.

Last draft there was only one 2nd round pick that got a 4 year contract. That was the 31st pick. Another article said this year’s 1st round picks all get 4 year contracts with 2 years guaranteed and 3rd and 4th year team options.

I said I was happy for Jaylin, and I meant it. You are a duck, dude (dang spell check).

I’m sure you are happy. Doesn’t take away from the fact of you saying Muss needs to give better advice without you having the slightest clue what advice he gave

Another thing to consider-and one of the main reasons that message boards have become so monotonous—is that people (myself included) are so quick to state opinions as facts without really, truly knowing the situations.

I was told a month before the draft which team JW was going to and that he had a guarantee from them. Both turned out to be true. There’s a reason JW jumped in and didn’t look back.

And, even after he was a solid pick to that organization—one that plays tons of young guys and hordes picks—there were people saying he and Muss had made bad decisions and it would be difficult for him to stick.

The facts are that OKC loved him, they targeted him, they told him they were targeting him, he relied upon their promises, and it has really paid off.

This year, Kennedy Chandler was 38th—4 spots lower than JW— and signed for 4 yrs/7.1 million with $4.94 guaranteed—the most for an American born 2nd rd pick EVER.

I don’t know how much JW has guaranteed, but with a 4-year $8.2 million deal, it’s probably safe to say it’s a decent guarantee (probably 2 years, $4 million guaranteed).

So, really, most of us don’t know. We talk as if we do. Sometimes we are right and the coaches make mistakes.

But often, as here, it is a shot in the dark because we don’t have many of the facts, much less all of them.

Believe me, or not, but I know what advice he gave. It doesn’t mean the advice was taken. If JWill doesn’t have 2 years guaranteed, he made a mistake. Muss had plans to improve his game next year, and he said so publicly…less charges, more verticality on defense…get more arc on the 3 ball, etc.

I’ve heard you are a doctor. I’m guessing proctologist?

And, again, when you’re wrong, and someone makes a post that is fairly reasonable, doesn’t mock you, doesn’t call you by name and admits they’re guilty of the same mistakes, you still go back to the typical name-calling, as you have, throughout this thread.

I’m guessing you’re talking to me? Why? I said what I had to say, and I don’t disagree with any of it. 2009 is a known d bag, and everyone here knows it. Is proctologist actually name-calling? D bag probably is, but I stand by it. Don’t pretend he didn’t call me out first. Why are you even in this conversation?

I thought you were talking to me. I don’t particularly care what you call 2009.

Pretty sure nobody else does either. Even the trolls say they wish he would go away.

Aloha Jeremy,
Both you and 2009 bring good stuff to the board which we all appreciate. Your passion is top shelf. 2009 is very objective with great memory retention. Not as good as Swine, he’s in his own league when it comes to memory recall. Bottom line, y’all need to kiss and make up🙈. We don’t need any civil war among us Hog fans.
UA…Campus of Champions

I kinda like 2009’s take on some things. His info is usually spot on. His approach & rebuttal can be testy, lol
It takes all kinds to make a message board.

Oh btw, happy for JWill, probably best situation for him all around. He will work his tail off.