“He’s a great player. He’s not a good player. He keeps getting better," Eric Musselman said.

In the biggest game of his basketball career, Jaylin Williams brought his A-game against No. 6 Alabama, finishing with a career-high 13 points and 8 rebounds. He was +30 in the win: 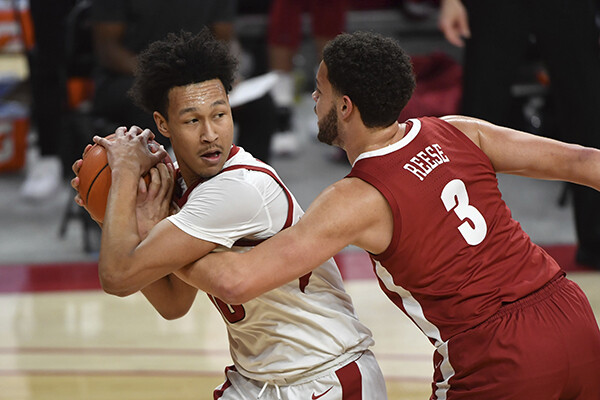 'He keeps getting better': Williams brings A-game vs. Alabama

Yes he does. I absolutely love Jaylin’s fearlessness on the court and board’s! He will mix it up with anyone.

Long ago someone told Nolan to get some “men”. Muss did that with Jaylin. He’s a “man”.

I expected Jaylin’s offense and thought he would be a starter this year but his physical play in the second half of the season is a complete surprise to me. In the two games I saw him play as a high school schooler against Catholic High, he looked so soft. But I am concluding now that it had to do with CH not having anyone to be physical with.

It is great watching him develop into a good player, but it is also nice to see that he is having fun playing the game. There is a lot of talk and emphasis on these boards about making money and turning professional, and I am not really trying to put that down, but for an old purist it is heartwarming to see kids play with passion and a certain amount of joy.

You have a typo, says sifted instead of shifted. Shurlds would not approve Scottie