I wish him well, but I still think he got really bad advice. How do you leave early as the leader of a top 5 team without a first round guarantee?

Some of the guys drafted ahead of him, I will never understand. What he gave away to be the 34th pick is substantial.

No guarantee he goes 1st round next year either. Call it bad advice if ya want. But none of us are NBA coaches, scout, or executives handing out advice or players listening to the advice.

I think the key advice Jaylin is getting is from Muss. And we have to trust Muss that if he thought Jaylin is making a bad call, he would be honest with Jaylin. I get the feeling that Muss never tried to talk Jaylin about returning.

Why would Muss ever push JWill into being a 2nd round pick? That has been the consensus for 2 months…
I don’t think Muss agreed with this decision, but there is no way he would ever say so.
Muss was talking about improving JWill’s verticality for next year to make him a better pro.
Doesn’t matter now. JWill is going to play summer ball for a team that is just trying to accumulate draft picks…without a guaranteed contract. I wish him well, because he was one of my all-time favorite Hogs.

Here’s what Herb Jones got last year as the 35th pick, just for comparison sake. 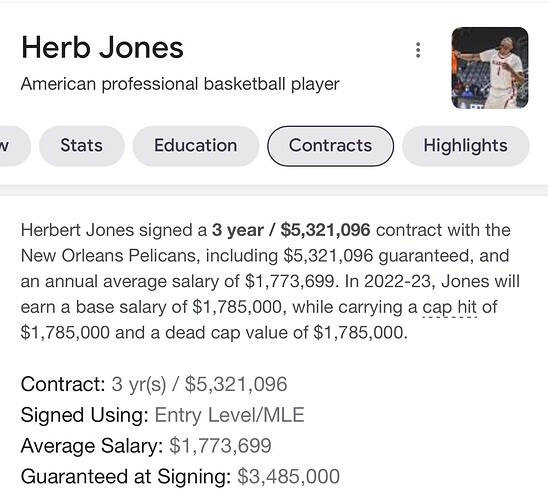 I don’t see this as a bad outcome for JWill. I am not convinced that the incremental improvement he would have had as a Hog next season would have made him a sure fire first rounder, particularly on a team which projects to have between one and three one and dones.

While a good chunk of the offense might have run through him because of his passing/basketball IQ, he was unlikely to get enough attempts on the mid-range and threes to show he can be a consistent threat to make those shots. That, in my opinion, was the skill he would need to demonstrate to get a substantially higher draft grade.

I think JWill can develop that shooting in a couple of years. The problem is that projecting that shooting development for a junior(in the 2023 draft) runs JWill up against all the younger high school/overseas/frosh/G League Ignite guys with similar body builds and NBA player projections. It would be really hard for JWill to move up without posting a lot gaudier scoring numbers than he was likely to have in another year of college.

If he develops his shooting, I think JWill has a great chance to have a lengthy NBA career. His current shooting form, athletic ability, and the mental toughness he’s shown so far indicate to me he will get it done, given the opportunity over time. I think he’s better off in the long run not having returned to Arkansas.

not bad at all if he likes proximity for family and friends, the oppo to move on up as did Bobby P. See Bobby P contract with the one blip up to 16 mil then back to being a bargain. Not a predictable income lest you get to top 3 draft material, not gonna happen with Jaylin. Hard to think of a college senior as old but that is how NBA views them so the advice or lack of might have played second fiddle to Jaylin preferences.

Agree. It is a matter of weighing risk/benefit ratio of staying another year. I am sure that is what Muss and JWill looked at. And Muss cannot guarantee he can improve verticality that much or at all.

I don’t know, I am just proud of Jaylin. When I watched him as a junior playing against Catholic High, I felt he will be a good college player, but never thought he was NBA material. He looked soft and not wanting to mix it up inside. He has come a long ways and has a good career ahead of him.

It’s a good look for our program to be sending players to the league, even if not first-rounders. Not a lot of college basketball players are drafted.

JWill is going to play summer ball for a team that is just trying to accumulate draft picks…without a guaranteed contract.

Johnny Juzang took UCLA to the Final Four last year. Would have been drafted. Came back for another year at UCLA. Last night… crickets.

It’s a gamble in both directions. I feel a lot better about JWill going at 34 than if he’d gone at 58.

I truly do hope he gets a guarantee, Larry. Maybe they will confuse him with Jalen Williams, and he can get his contract.

He’s definitely going to get a contract. a team would be crazy to waste a draft pick on someone they’re not gonna sign. They’ve had workouts and conversations and negotiations with agents already. What’s the point of accumulating draft picks if you’re going to throw them in the trash? That’s not what the Thunder are doing, and that’s not what any nba organizations are doing. There will be a few second round guys who want to remain overseas and agree with the team that drafted them to develop overseas for another year if they’re already making nba level money there while the nba team retains rights to the player. Jaylin has several nba teams interested in him even if the Thunder for some reason decided just to waste a pick on him and offer him a peanuts contact he would turn down. But I think the main point you’re underestimating is the value muss sees in sending 4 straight nba draft picks to the league. And I still don’t think jb hunt or anybody else was about to give Jaylin a multi year 5 million plus salary nil deal to come close to what the nba pays. I think muss is doing the right thing to push as many guys into the league as possible. And we’re gonna win it all next year. Wps

As I understand it, there are two options. By far the most likely one is the standard NBA rookie deal, which may or may not be guaranteed for the second round. Minimum for a rookie is $995.000. But he could get more than that; Herb Jones got an average of $1.7 million for three years, guaranteed. The other option is a two-way deal, which is half of the rookie minimum.

The tricky thing here is that OKC already is over the cap and has 15 players under contract. And they just drafted Holmgren and the two JWills and got Diang in a trade, so that’s four new people. You can have up to 20 people on the roster during the NBA offseason, but it’s 15 once the season starts, so some people who are there now gotta leave.

The cap can be finessed, and you’re able to sign your draftees regardless, but they have to get down to 15 before the season starts October 19.

And, it is not that both were drafted for the same position. Holmgren is listed as a PF / shot blocker in the draft. JWill is a center in the draft. Teams drafting are probably hoping JWill can become a “stretch” center/pf with a serviceable 3-point shot.