Jason Peters out for season

Peters, 38, had started eight of 12 games this season. A nine-time Pro Bowler and two-time All-Pro selection, Peters has played all 16 games just twice in the last six seasons. 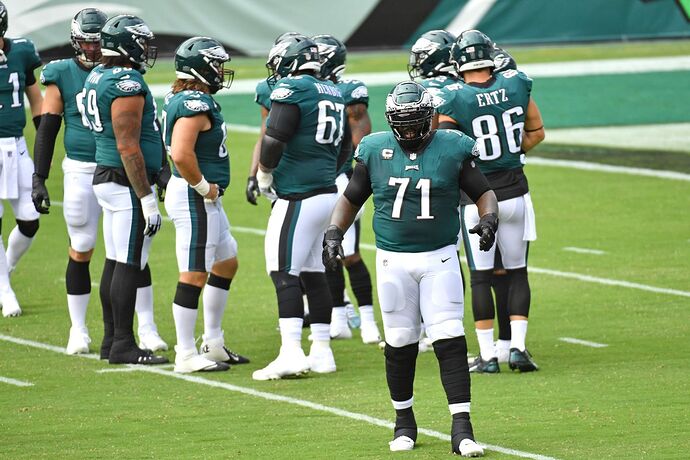 Eagles' Jason Peters out for season, will have toe surgery

Peters, 38, is a nine-time Pro Bowler and won a Super Bowl with Philadelphia.

I think Jason will hang it up now. I worried he might suffer an injury that might harm him for life and hopefully he will retire and enjoy life.

Add six to the year he plays his final snap, and that will be his Hall of Fame year. He’s had a remarkable career.

Time to say goodbye big J, has had a tremendous Career and is as good as I have seen in his prime, but the body is telling you I have had enough, head up high big fella and enjoy your retirement

Jason had an awesome career. Too bad he couldn’t get a SB Ring. Should be first ballot HOF’er.

He did, in 2018, when the Eagles beat the Patriots in Super Bowl LII.

I remember the first time I saw Jason Peters. It was at a Razorback practice. His freshman year, I believe. I was amazed at how much bigger he appeared than everyone else on the field. That was, of course, before he showed all he could do.

Ooops forgot about that one.

His spring game as a freshmen included three straight lost yardage tackles in his bid to play defensive end. They were so called busted assignments so John Thompson gave him to the offense and he became a tight end. Strange stuff.

You have made Atlanta, TX proud of you Jason.
Rawhide

So the people in Atlanta are claiming the kids from Queen City? Or was he from Atlanta and played at Queen City?

First time I saw Jason Peters was on a basketball court his junior year in high school. He could move as well as any of the guards. His shooting range was about 10 feet, but it didn’t need to be more than 5. He was unstoppable.

There are only 2 high school players I have seen that were similar size with comparable agility: Shawn Andrews and McTelvin Agim.

Back in those days you could go inside the fence and watch practice. I remember watching Jason run with the Linemen and he was consistently 20 yards ahead of them. I remember because it was like 1pm during the week and I had snuck out of work. I happened to glance to my left and there’s the CEO of my company. He just grinned because he had done the same thing

Jason Peters era is over in Philly. He stayed one year too long. This has been a pathetic year for Jason and the Eagles. A lot of decisions pending.