Jarrion Lawson back in action at Tyson

Watched a bit of the ATL meet this afternoon on ESPN. Lawson won his heat of the 60 dash. The other heat was won by some guy from UCA who ran a huge lifetime best in the heats. Lawson backed off before the finish so I suspect he might have something to beat this Bear.

I watched all four American Track League meets in Fayetteville. All were broadcast live by ESPN and for the last three meets, they had close to their A Team for the broadcast. Great pub for Fayetteville and the Razorbacks.

Great four meets. There were many world leads set. One world record was set in the shot put and plenty of national high school records. During these five weeks the meets were held over, virtually who is who of US track and field passed thru Fayetteville, including the woman who has won the most medals in Olympic T&F, Allyson Felix.

I was pleased to see many high schoolers as young as 15, compete with America’s and International best. Very nice to see the young talent that will win medals for US in the future. They set many high school record, the highlight being 200M record set by Jayden Slade that erased the mark set by current US sprint star Noah Lyles, even after stumbling out of the blocks. It was pleasing to see the sport draw this kind of talent competing against football and basketball. Again hoping Isaiah Sategna focuses on track rather than accepting a football scholarship.

It was nice to Lawson back. Zach Jewell is the one from UCA that won 60M with the 19th best time in the world. Whenever a white guy wins the sprint, makes me sit up and pay attention. This previously unknown youngster is one to watch.

This previously unknown youngster is one to watch.

I saw in the ADG story that he’s from Mena. A sprinter? From Mena?

Something else (related) I’ve noticed in the ATL and college meets from Tyson this winter is that there are more white sprinters, hurdlers, etc. Fast is fast, no matter the pigmentation. Jewell is just the local example. I wonder if track coaches for years bought into the stereotype that white guys just aren’t as fast. Even when I was running 45 years ago in lower Arkansas, you just didn’t see white guys in any event shorter than a 400, and not many of those.

I have seen increase in white sprinters and hurdlers on the circuit, including women. There is a woman, think her name is Cunliffe, that I think will be world class at the highest level. She is giving Jena Prandini, our current white sprinter on the world scene, a good run.

Regardless, it is good to see this trend. It will increase the growth of sport in the US.

BTW, looks like the reverse of this is happening in Great Britain and rest of Europe and some in Australia.

Thanks for the report. great news for UST&F and for Fayetteville.

I do wonder how much the issues with football, ie concussions/safety, could benefit other sports in USA. T&F, soccer, I’m sure there are others.

It would be great for all sports to diversify. The Arkansas baseball team has more black players (starters) than for several years. It is encouraging. Baseball is tough for some, because of the cost of attending school with only a fraction of a scholarship.

Baseball is tough for some, because of the cost of attending school with only a fraction of a scholarship.

Track’s the same way. Partial scholies. I remember Mike Conley cleaning up trash in Barnhill for his work-study job, and this dude wound up as an Olympic gold medalist. And school’s a lot more expensive now than it was then. Not surprised he got his kid into basketball instead of track.

I still remember our team a few years ago which had one black player but no African-Americans. Because Kern Watts was from Canada. And baseball is bad because it’s so expensive at the youth level now with elite travel squads and private coaches and yadda yadda yadda. It’s like high school baseball isn’t good enough any more.
I’ve told the story here about my ex-wife’s nephew. His dad spent untold thousands of dollars on elite travel squads (they seriously chartered jets to fly to national tournaments). He wound up signing with OU (his dad’s alma mater), then transferred to A&M (closer to home outside Houston) and wound up giving up baseball because of a wrist injury; he couldn’t throw or hit any more. I haven’t talked to his dad in ages, no idea if he thinks all of that was a good investment, 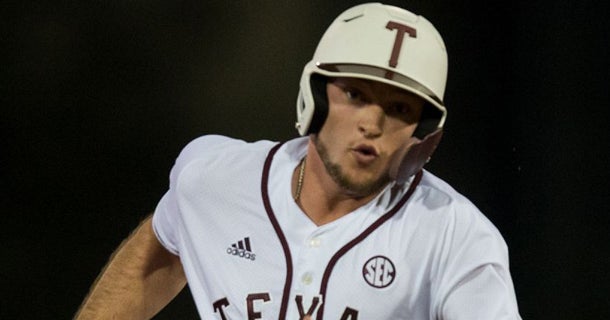 There were some high expectations for Chris Andritsos after he transferred to Texas A&M from Oklahoma. Though he was second on the team in homers, his career is now over.