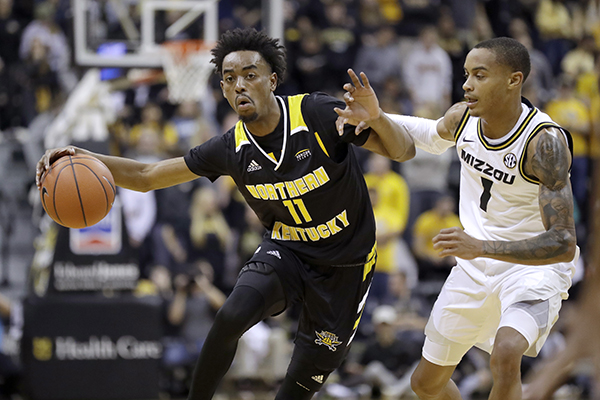 Northern Kentucky guard Jalen Tate has committed to Arkansas, becoming the second graduate transfer to commit to the Razorbacks this month.

Outstanding pick-up for CEM and the Hogs.

He looks to be a bit of a cross between Whitt and our “probably departed” Mason Jones. Outstanding defender, good 3 point shooter, very good rebounder, and good ball handler.

Other than Sills and Notae, length everywhere on the roster.

I recall the announcers commenting that he was absent from the game with Arkansas, but he missed about 10 consecutive games…why?

Added quotes from Jalen. He credits the fan base for influencing his decsion.

Richard, Justice Hill just said on social media that he bets $500 that one of our commits don’t sign with us. Doesn’t take a brain surgeon to figure out he’s talking about KK. Do you have any thoughts?

I’m not hearing anything that makes me think any of the three won’t sign.

Can things change? Sure but at this time I don’t think so.

Doesn’t take a brain surgeon to figure out he’s talking about KK.

My first thought of who Justice is talking about would be Moody, not KK. Jalen is a good ball handler, but a better rebounder and slasher. He’s also probably going to be a good 3 point shooter here, as evidenced by his 40+ % on 3s his soph year. He’s the same size as Moody.

I think CEM sees Jalen as a Jones replacement more than a true PG. Like he used Cody Martin, a good passer, rebounder and some called him a “point forward”.

By the way, I really hope Justice knows nothing and we are both wrong. We need both Moody and KK this season.

I agree with your last sentence. Moses and his family are all in on Muss and the Hogs though.