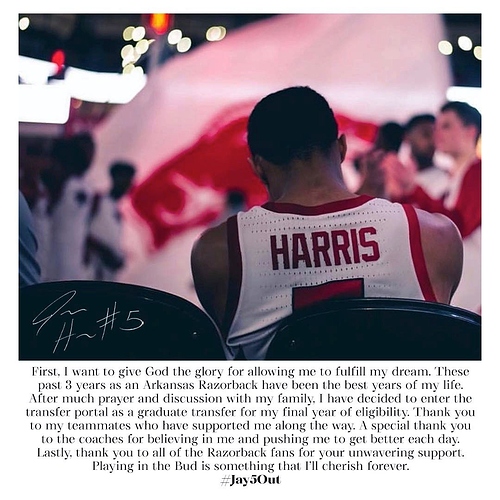 Yep… Gotta a load of guards coming in next year. He can get big minutes elsewhere. I’ll miss him, he was a good player, he did well here.

Not surprising, but he needs to be given credit for making the move here and always being ready to contribute.

He has some weaknesses on the court, but is a great kid.

I wish Jalen Harris the best moving forward! Next season I will try to watch him play at his new school. Playing time was going to be hard to find next season for him.
Richard do you think we will see another transfer out!

I kind of thought this was coming…wish him the best! the kid played hard everytime he took the court!

He did not meet my expectations of him last year. I am sure Mike was disappointed that he didn’t quite improve to a higher level during the year he sat out.

However, I think without the coaching change, Jalen would have been the starting PG with consistent 28 plus minutes and may have just blossomed into the player that I expected., He never did quite find his role on this year’s team. It seemed he was trying too hard and not let the game come to him in the limited time he got.

I too wish him well. He made a nice contribution here and seemed to be a team first guy.

He always played hard. He can really run and is quick. He probably needs to go where he can play more. If he had a nice shooting touch, he really could have been a player.

Thank you Jalen for being a Hog.

People keep pointing at Henderson or Chaney. Either is possible; likely, I don’t know. Of the two I think Chaney is probably more likely.

I appreciated Jalen’s work; I’ve defended him here when a lot of people were ripping him. Wish he could have scored more, but a big part of our success this year was valuing the rock and Jalen took good care of it.

Thanks and continued success, J5.

All the best in life and your next stop Jalen! We appreciate you.

Jalen Harris was quick. He helped with assists and when other teams pressed the Razorbacks. I wish him success at his next location. GHG!

I don’t like the timing of his poor decisions late in games that lead to TO’s!
I hope Henderson is back next season. He showed some flashes of solid play protecting the rim!
Chaney just makes some bad decisions that lead to to T’s and got him on the doghouse. He’s a good player but will he improve and get to rolling Who Knows!
CEM will makes improvements to the roster and how much depends on Jones and Joe coming back next season.

No one can ever say he did not carry himself with class. He was a true team player never complaining about minutes or his role…rate in this age. I wish he would have finished here.

Wish he could have scored more

I think you could say that about everyone on the team sans Joe and Jones…wish him luck,

It has been great seeing Razorbacks fans being gracious to him since he announced his decision. He has a 2-3 year old son to look out for, too, so it’s important to keep that in mind in all of this.

If Jalen could have improved that 3 pt shot a little more then more mins may have came his way. He is a hustler & hard nosed player though without a doubt.
Wish him the best he deserves to play more somewhere.

Has he already completed his degree?

I don’t believe he has yet.