“He does such a good job of getting other people layups or clean looks with their feet set, guys that have 10 toes toward the rim.”

More on Jalen Harris and how his pace of play impacts Arkansas’ offense: 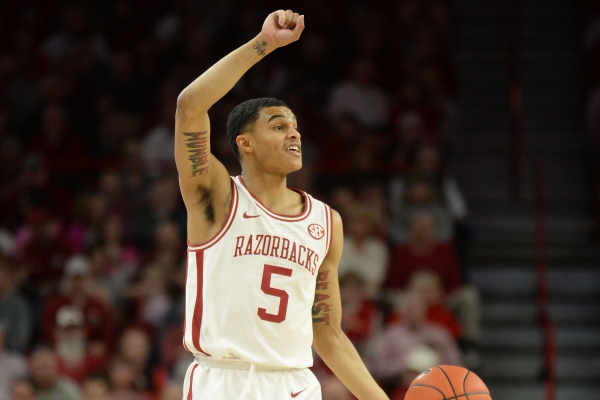 'He just pushes it': Harris changes game with pace

Perhaps lost amid 20-point nights from Mason Jones and Jimmy Whitt, and Desi Sills' 18-point outing against TCU was the play of Jalen Harris.

Jalen brings a different speed to the game. The guy can fly. When he plays under control, he is a valuable cog in the wheel.

That’s the man to bring the ball up at the end of a game when you need a bucket to be able to distribute the ball where it needs to go!

Jalen brings a different speed to the game. The guy can fly. When he plays under control, he is a valuable cog in the wheel.

My recall from last season, is that he shot a higher percentage of his shots from the 12-16 foot range than he does this season. If right, perhaps that’s an implication of Whitt being on the team. But, I felt his mid-range was ok last year and sometimes quite timely.

According to my shot chart data from last season, Jalen was 9 of 20 on midrange jumpers on the left side of the floor, 7 of 29 on the right, and 3 of 19 between the elbows. He’d taken just four two-point jumpers through this December and missed all of them.