Dudley spoke to his father about the decision. 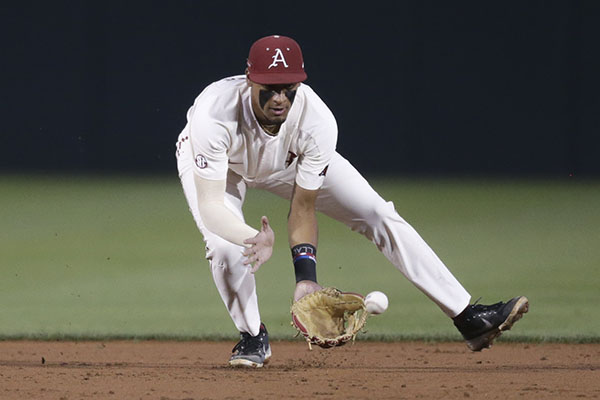 Battles will return to Diamond Hogs in 2022

The Arkansas baseball program got a boost Tuesday when starting shortstop Jalen Battles announced he will return to the Razorbacks for the 2022 season.

Next year’s team will have an embarrassment of riches. I just hope the pitching is as good as the hitting/fielding is likely to be. I am so ready for the season to begin. This past season ended too soon & too badly.

I hope the incoming class is patient and don’t hit the transfer portal.
Battles will improve at the plate next season.

Army, I admit that was my first thought as well. Don’t get me wrong, I’d prefer a proven talent like Battles to come back over plugging his spot with new blood, but I’m also excited over this new class and the potential I see in it. I hope DVH and staff can find a way to juggle this feast of riches in field/batting talent and keep them from deciding to transfer.

I just wish we had this problem in the bullpen. Looks like that will be the measure of our team this next season.

That’s awesome news he’s a great player.DVH going to have his hands full trying to figure out how to work all this Talent out. I expect to see a few transfers like last year from people who were coming in.
This is a great problem to have but it is indeed going to be a problem because quite a few people going to get their feelings hurt.

Where the heck do we put the new guys? I can’t see moving Battles to a new position, given how he played SS last year.

Too bad players think they will come back and improve stock while aging another year. It never happens. Even though NCAA gave extra eligibility year, the front offices do not care. The offer won’t be more, it will be less because he will be 22.5 yrs old. The front office needs have a value attached to tools, performance and then performance related to age. The older the player, the lower the value regardless of how they played. Look at the top hitters this year that are 22. Perfect example is Niko Kavadas at Notre Dame. Too bad college coaches selfishly convince kids to stay for their purposes.

Just for grins, I took a look at the last 15 games of the season. That’s when everything…Regular Season title, SEC Tournament title, Regional and Super were on the line…and against very, very high level teams/pitching. In that stretch, Jalen batted .319, knocked in 10 and scored 14. In fact…in retrospect…he may have been our best hitter not named “Welch” down the stretch

Battles will be SS
Moore will be 2B
Slavens will be 1B
Wallace will be 3B or RF
Stovall will be somewhere (3B, corner OF, DH?)
Wilkerson will be in OF
Leach/Turner will be C

That leaves Bohrofen/Bishop/Bates/White for another OF spot.

Who hits best to be DH among everyone else: Vernardo, Welch, Gregory, Webb, any mentioned above not on the field, and even maybe Goodheart?

I said last December when Jackson Cobb transferred out that we must have an outstanding lineup returning in the spring. More than one of the names above may leave after the fall, and most of them are better than Cobb. (Can you imagine if Logan Chamber flipped from TN?!)

Kopps won’t sign for much money. He’s got no leverage. The Padres feel like he can help and then it’s a steal in third round to save pool money. But he didn’t improve his dollar value for himself. His improvement helps the Padres get a really good pitcher for next to nothing.

I think there are certain players who can’t help themselves much monetarily by coming back, but I think there are some who can. Isaiah Campbell, for instance, could have been drafted in the top 10 rounds in 2018, but he set his price high. He signed for $850,000 as a second rounder in 2019. He wasn’t going to get anywhere near that the year before. He was a fourth-year junior when he was drafted, the same as Slavens and Battles will be next year.

Position players are probably less likely than pitchers to make that kind of jump, but I think they can help their stock if they have a big year at the plate. We don’t know what was offered to them this year, so it might be hard to say next year whether they helped or hurt themselves.

There are other benefits to coming back to school. For one, as fourth-year students, their degree requirements should either be completed or near completion by next spring. Not to mention the life of a college athlete probably has more perks (notoriety, travel, workout facilities, etc.) than the life of a player working his way through the lower levels of the minor leagues.

The Hogs were near the top in HR’s/BB’s/Run’s/Fielding%… and next year’s lineup should be better and have a deeper bench.

But he didn’t improve his dollar value for himself.

I’d bet Kopps improved his dollar value a lot. It was unlikely he was going anywhere following the 2020 or 2019 seasons. He almost gave up on baseball entirely. No one (other than the coaches and players who saw him last fall) gave much thought to him coming into the 2021 season. It wasn’t until he started shining so much during his final year that his stock went up. He might not get paid what he might have gotten if he were 20 instead of 24 years old, but there’s no doubt his stock improved tremendously between the 2020 & 2021 seasons.