Seems like a really nice complement to line up as a big who is also older.

Former top 50 recruit who has sort of underachieved but has a lot of talent.

His peripheral court vision is outstanding thus the Guard/Forward label. At 6’9 doesn’t shy away from penetration but doesn’t finish well through contact.

The good news is he around a 71% free throw shooter.

He isn’t a leaper and doesn’t look to block shots. His stats this past season screams Jimmy Whitt but with a affinity with 3pt shooting.

One game he may give you 7pts the next 25pts.

His H.S. & AAU tapes suggested the next Lamar Odom unfortunately he lacks his athleticism.

I’m guessing he may take over Adrio’s #2 jersey.

I’m guessing he may take over Adrio’s #2 jersey

Jimmy Whitt’s…he and Moody are your SF’s

So? This isn’t football where numbers matter. He wore 2 at UNM and 2 is now open here.

So? This isn’t football where numbers matter. He wore 2 at UNM and 2 is now open here.

Swine I now believe we were debating two different subjects: number vs position

I said jersey, not position.

I said jersey, not position.

Thought that’s obvious to me now per my previous post, my apologies sir.

I hope he’s an upgrade as compared to the production Cyllia had! CEM has watched this guy play live so he must think he can help.

Really like him! muss will get his defense up to par but he can a huge asset on the offensvie end…very good pickup!

He upgraded his stats considerably this season in his final conference games. He started all 13 games he played in (was injured 5 games) and ave. 13.4 ppg, 5.7 rpg and made an excellent 41.9% of his 3s. He also shot the 2nd most 3s on the team, so he didn’t get that percentage by just shooting very few 3s.

I’m excited. Could be our Isaiah Moss version 2. Stay away Kansas!

Are you kidding me? Jackson looks awesome. Vision and passing skills are sky high. Serious overall skill set. Great pick-up.
This could be a really special team if all these parts come to be.

is no one else concerned about all the crap that mired the New Mexico program down and created a real quagmire of revolt? dude was definitely in there for all that early… not as bad as Wichita St hate for their coach, but not far behind.

is no one else concerned about all the crap that mired the New Mexico program down and created a real quagmire of revolt?

Not concerned at all; actually, I’m thinking (hoping) that quagmire was the reason Jackson didn’t always appear to be 100% bought in on defense.

Most players love to rack up offensive stats; playing defense requires more commitment to the program/environment … which has been not so good lately at UNM.

I’ve been watching some film of Vance, and he had a lot of highlights from the MWC Tournament in Las Vegas. In four career games there, he averaged 22 points, 8 rebounds, 3.5 assists and 2.8 steals. Commentators covering the tournament nicknamed him Vegas Vance.

Arkansas is scheduled to play in Vegas in November. That could be fun.

What’s the knock on this guy? If he’s as good as he looks, with his size, he would be a draft prospect. Highlights are impressive, but there’s got to be a catch
Not a lot of guys his size with his ball handling and shot creation

I asked a couple of UNM beat writers to give me some insight on Vance, including weaknesses: 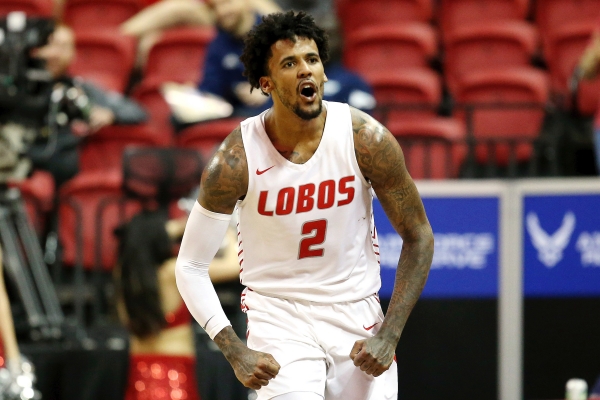 What to expect from grad transfer Vance Jackson