It's that time of year again...SEC coaches comment on other teams (anonymously)

Interesting comments on Sam and Arkansas. Actually sounds like things one might hear from others looking at our program. 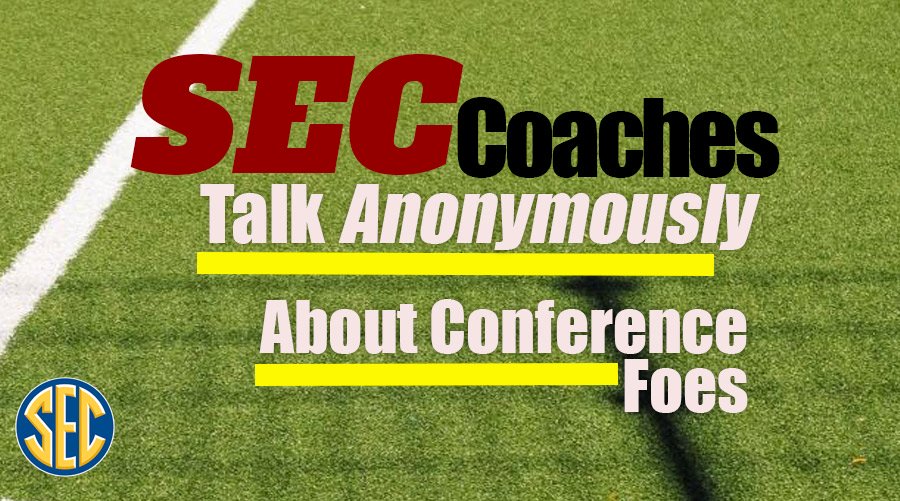 Its not easy getting college football coaches to honestly comment on another coach, player or team. Most coaches dont want to give opposing teams...

Very interesting what they said about Briles and possible chemistry issues and we will find out if we have the type athletes to make this system work in the SEC, which is by far his biggest challenge to date.
Odom has his hands full for sure, but I love the additions up front, linebackers are by far the biggest concern for me, Draper has to come in and be an absolute stud (which he most certainly was not in Oklahoma) to go along with Pool, I’m not sure we have a 3rd SEC LB.
I love that the players have such admiration and respect for Pittman though which can sometimes lead teams to doing much better than we think.

After the last few seasons who would think any different.
Yea the Briles comments stuck out to me also. Chemistry issues and the other comment as well that CSP may not have been alone in that decision.
I think there is more talent on this team than people are giving credit for. Stacked with it no but that could make for some underestimating.
We’ll see.

Nailed it. The overall roster is at Sun Belt talent level at best. The two previous HC couldn’t recruit to save their life, regardless of what rankings or so called experts tell us. Slow and small is no way to go through the SEC.

Absolutely could care less and most of these comments were posted last year. This is what opposing Coaches tell recruits - so lets play football and see what happens. The Hogs apparently had zero structure from the last Staff, it looks now like we have the makings of a real football team.

it looks now like we have the makings of a real football team.

my favorite was “they want to score points, but they don’t recruit those big 12 type athletes to run this offense”.

I guess Treylon and trey and rakeem and Henry just arent up to snuff. LOL, of all the areas of our roster to denigrate, that dude picks the one are where we actually do have real players.

But in general, our last 4 seasons have totally earned these type comments, and we’ve got to hope that our players and coaches can work/recruit their way back to respect.

I’d be putting those quotes up in the locker room…

Yawn, who cares what some analyst at another school says, I doubt they get any coordinators to speak, even off the record. These were done back in the early spring, so no one knows what the thoughts are today. Anyway, line up and play.

You’re right a lot of these quotes were from last year it seemed. I remember the exact same things being said for the most part

And the comments appear to have been correct. Back to back 2-10 seasons.

I found this line under Florida to be interesting:

“The quarterback change made them a completely different program. They’re a better, more aggressive offense with Kyle Trask.”

I wonder why they would say that?? Frank’s can surely make every throw Trask can make. Frank’s can be great if his decision making improves.

Yawn, who cares what some analyst at another school says,

Agree. You have to take with a grain of salt any article that quotes “anonymous coaches” in the SEC or any other conference. They may be calling an ex grad assistant as his “anonymous coach”. Or worse, it may just be the writer pulling the quote out of his arse.

Franks can be great here if he and the receivers are on the same page with decisions and reads. 2 pieces to that puzzle.

Did Franks have many other transfer destination options at the high D1 level?

What amuses me is that - every year - these articles (anonymous coaches comment) come out, and - every year - someone responds with “who cares?” type posts.

The answer is that many of us “care” - at least enough to read the article - and some do not. Now, by “caring”, that doesn’t mean “we” give it 100% credence and/or that we aren’t aware that some of the coaches’ quotes may have an agenda of some sort and may be less that totally honest or objective. Just as with ANYTHING one reads in the media, one has to read and then decide what (if any) value they ascribe to what they’ve read.

Personally, I don’t care one way or the other. But I do find it interesting reading…for Arkansas and some other SEC teams. I know some is BS, but some it likely is not. It’s up to the reader to interpret, or bypass, as the case may be.