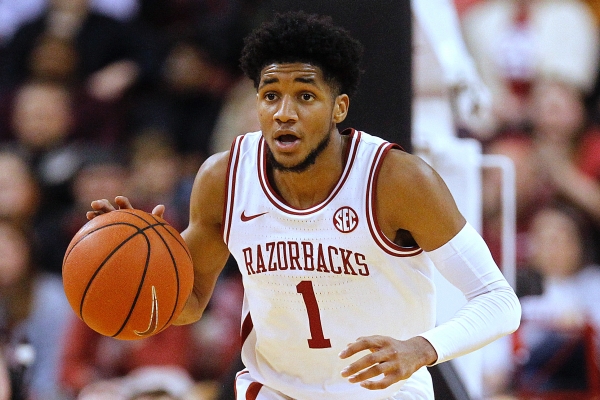 Two-and-a-half weeks after announcing he would return to Arkansas for his junior season, Isaiah Joe changed his mind Monday.

Good luck. I mean that with nothing but sincerity.

If he received good draft information, he should take it.

Oh my. We can’t catch a break.

I hate that he is going, I think he would have benefited from another year, but with the uncertainty of the season, it seems sensible to not sit in limbo. Good luck to him. Just means some of the other talented kids will just have to be ready to take over the missing production.

Or is it more Covid 19 and the uncertainty related to the college season?

It think it’s exactly that. Probably Exhibit A that there will not be a season this year. No reason for IJ to stay around.

I don’t blame him one bit because of the uncertainty.

I think he’s also thinking that they may have to go home for the fall semester. That may or may not happen, but the school year being on-line classes and no where to practice could be reality in a few weeks. Not predicting that or suggesting it should happen, just noting what MIGHT be in his mind. College basketball players hate that they would not have their gym to practice in or their coaches to instruct them.

No doubt we will miss him and there is also no doubt he made the best personal decision. I wish him nothing but the best and hope he is a huge success in “the league”.

The really good OU running back, Kennedy Brooks, just made a similar decision. That may be some barometer of whether football and/or basketball really gets played – guys like Joe and Brooks probably get pretty decent information from those in the know. Although I’m not sure how anyone could have a true crystal ball. Things change every hour it seems.

I would do the same if I were him.

The College of Charleston is opening on Sept 15…but if I were a betting man I would bet the over/under on us NOT opening until January. If then.

The one season I’ve had confidence in happening is b-ball. Just small group and easy to control. But I’m still sure that was a factor. The good news is he doesn’t struggle with his decision to shoot.

Thanks for the memories Isaiah. You’ve given our state so much. All the best as you take the next step.

I like many of you believe the uncertainty makes this move a good one for him and his family.

I have a feeling Isaiah got some new information from few NBA teams about his draft probability in the last seven days or so.

Yes, I don’t think anyone knows what is next. I have gone along the last four months in two-week windows.

If that is the case - and I don’t know if it is or not - then that would be yet another great season to head to the NBA.

One positive is it likely allows for more playing time for the three freshmen. So they shouldn’t be looking to go elsewhere as they might have if they didn’t get the playing time they feel like they should have gotten.

A couple of weeks ago when IJ said he was coming back I thought this was the only good news I have had in months, I was so happy! Sadly Covid strikes again! But of course I wish him well!

Won’t know if this was a good move or not for awhile. I hope it works out for Isaiah.

I don’t know what he’s heard or not. but when it was reported that he was watching the first week of practice, it just let me know that he was not DYING to be a hog. and so much of college athletics is WANT TO. so if he came back, but was thinking about the NBA, he would not have been a great hog. we only need players who are HUNGRY, playing like Corey Beck every minute. we don’t need good players, thinking they should be in the NBA, playing for us. like the senior season for Day and Miller.

so if his heart was always in the NBA, then good luck Joe. we did not want you in a hog uni with your mind on “bigger things”.

I’ll continue to root for all players in hog uni’s and for all our former hogs, like IJoe. wherever he plays next season.

It does allow Moses to be our top shooter. Let’s see if he can be as good as a freshman Isaiah, which I think he is. But doing it on the court is different…

It should increase minutes for either Notae or Davis. Seems like they are the last two in rotation of wing players.

I don’t think there is any risk of any of the freshmen leaving. If there are any transfers, it will be in the upper classes.

Isaiah Joe’s decision tells me that the outlook for on-campus classes & sports for this Fall & Spring is very doubtful. He apparently wanted to return for another college season, but talk among the players & lack of optimism changed his mind again.