Entering Saturday’s game at Ole Miss, Isaiah Joe had really struggled shooting the corner 3. Then he hit all 4 attempts against the Rebels. A dive into his shooting numbers, plus thoughts from Eric Musselman: 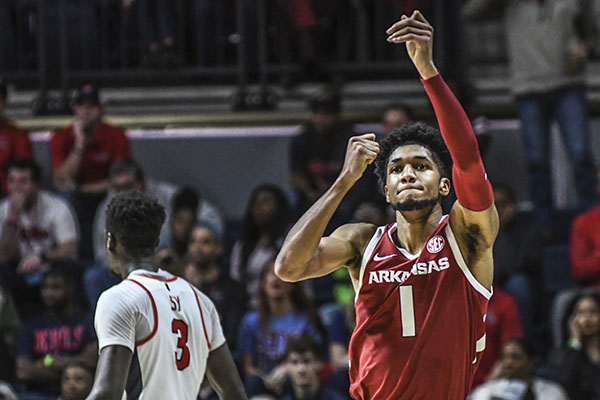 While it may not be all that surprising that Isaiah Joe made seven 3s at Ole Miss, it is interesting considering which areas of the floor they came from.

Just speculating…seems like I rarely see a screen in front of Joe from the corner. So, without a strong inside presence, those have routinely been tough shots.

Any thoughts on why 4 of 4 against the Rebs?

Joe received a pass off a drive toward the basket on one of those 3’s and that made the defense react to the player driving the ball but mostly it was motion of the offense.

At least early in the season - and this still happens every now and then - Arkansas ran Joe off screens along the baseline for corner 3s. Many of those were good looks, he just missed.

Saturday, I saw Jeantal Cylla set an impromptu screen for Joe, which led to his second corner 3. Two other 3s came in transition off assists from Mason Jones, and we’ve discussed how deadly Joe is from anywhere behind the line in transition. Lastly, the four-point play came following good ball movement against the 1-3-1 and another swift pass from Jones.

I think it was just a mix of properly filling lanes in transition and having a guard in Jones who knows to find shooters in those situations, solid off-ball actions from a teammate, and getting the ball to your best shooter in a soft spot in the zone.