Is there actually an official SEC Tourney bracket?

What I see on the official SEC website is just a listing of the 5 teams tied for 5th listed by overall record. That is not the official bracket. That’s not how it is determined. The order is determined by which team has the best record against the other 4 teams that are tied. If there is still a tie between 2 or more teams, it’s head to head. If that’s still tied, it’s best record against the #1 overall seed (Auburn), then #2 seed, etc.

The SEC web site today has not produced an official bracket with teams listed by seeding?

I noticed Rothstein put a bracket out there, so maybe he went to the trouble of looking at all 5 team’s records and determined accurately using those rules?

The SEC website doesn’t have the bracket published, but they do have the matchups listed when you look at scores on specific dates of the tournament.

That bracket (for us) is going to be harder than our draw in the NCAAT.to get to the Final Four.

To win the SECT, we’ll likely have to beat a team (LSU) that is Sweet 16 talented (and it wouldn’t surprise me at all to see them get that far…or even to the Elite Eight),. plus two bona fide Final Four candidates.

The good news is that this, plus the recently concluded gauntlet we just finished in the SEC regular season, should have been an excellent prep for the NCAAT, and should help us to advance. 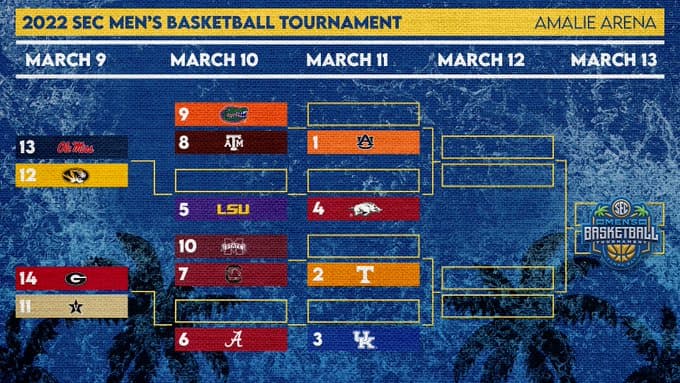 Thanks, I didn’t realize someone had already covered all the 5 schedules and determined the order. It’s kind of amazing with 5 teams that none were tied.

Yes. It was amazing that the 5 teams tied at 9-9 were all separated by the first tie breaker alone (head to head).

Everyone seems to hate we have to play LSU next Friday. Remember they will have to beat either Ole Miss or Vandy the day before while we will be resting and preparing. We’ll be fresh and will make it three in a row over them, if they even advance. This is madness time…

Sorry, either Ole Miss or Mizzou…