I hope so. With no freshman QB in the incoming class, I’m a little worried about quarterback depth. Also, if one of our top 3 QB’s goes down, do you think Landon Rogers might move back to QB?

He is not practicing right now. Pittman said last week that he didn’t think Renfro would be cleared to practice until early September.

Rykar Acebo is taking fourth-team snaps in practice. I’m not sure what the thinking would be on Landon Rogers. He was moved to tight end pretty quickly last year.

Not familiar with Rykar. Sounds like Dowell Loggains arm is being pressed into service too. Hope that Kade is back soon.

Yes, Acebo is from Jonesboro. 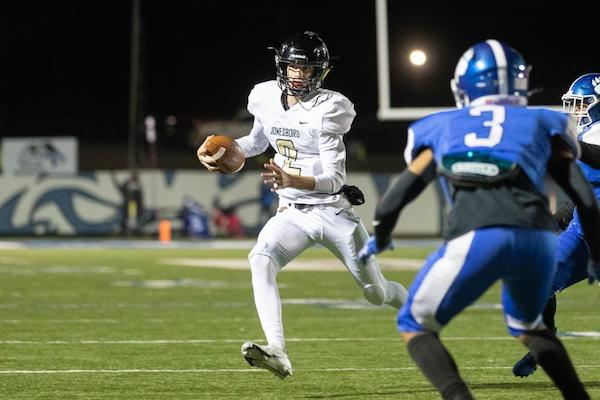 Jonesboro quarterback Rykar Acebo has committed to be a preferred walkon at Arkansas on Saturday.

So we do have an incoming freshman with Acebo? He has good height at 6’4" for a QB.

Did not see Dowell Loggains on the roster. Landon Rogers apparently has the height 6’4", size, & running ability if capable & needed at QB. Will Fortin be eligible for another season after this Fall?

If we are not too reliant on KJ this Fall, hope our backup QBs get game day experience, especially if KJ has a great season & decides to go pro. With Singleton as 4* commit from GA, perhaps he will be a contender as a Freshman when on campus in '23.

If any team gets past the second QB, it is trouble. I don’t care what level.

So we do have an incoming freshman with Acebo? He has good height at 6’4" for a QB.

Acebo is the only freshman quarterback on campus. Arkansas did not sign a scholarship quarterback in the last class.

Dowell exhausted his eligibility many years ago. I read somewhere that he was throwing passes at practice. I guess he was the best available arm with the group he was working with.

Almost all coaches have thrown passes in practice. DB coaches throw passes in their individual drills. Some of them threw some ducks.

He was throwing passes to the tight ends, his position group.

Fortin is a transfer from South Florida. Started out at North Carolina where he was a 4-star recruit. From what I can find he started four games at USF and was basically a 50 percent passer. He left UNC when Sam Howell arrived and it was obvious who was gonna be QB1. I agree with Clay that we’re in trouble if we have to go past QB2, but at least he’s seen some decent game action (looks like he’s played in 11 games in three years over both schools)

Ohio St had great QB’s 1 thru 3 one year. Beat Bama In semis of playoffs with 3rd stringer Jones.

Yes they did. That kind of stockpiling of talent at the QB position probalbly won’t happen again anytime soon.

So, If Fortin is not needed/does not play in more than 4 games this year can he RS and come back next year? He may be very much needed next year.

He’s already used his redshirt year. Played in four games as a true freshman. So it won’t matter how many games he plays this year. It can’t be another redshirt year. Could he get a Covid year like Wagner and play six? I guess he could. But there is no reason to limit him to four games since he’s done that. At least that’s the way I read his bio. This is his fifth year.

Thanks, Clay. I’m just concerned that right now next year looks like it could be trouble at the QB position. I guess I should just expect the coaches to rectify that situation somehow.

It’s really early days in fall camp, but there seem to be some subtle signs that Hornsby is making some strides. We will know more after the two scrimmages.

Singleton is committed for the 23 class. I don’t know if we take two freshmen QBs, be interested to hear what Richard thinks about that. The way the world works these days a portal QB to go through spring practice would be a decent probability as well- Arkansas will be an attractive option of portal QBs with decent resumes because of the improving overall talent level and the general rise in the program.

There’s always uncertainty when a QB who has started and done well for more than one year leaves, but it looks manageable at this point.

I really like Hornsby as a difference maker. He will grow a lot this year.

I’m going to watch practices next week. Look forward to watching him.

Watch LT a little bit also….please and Thank you …