Is it just me, or

am I noticing many more wild pitches than usual? Seems tome to be a ton of them lately for most teams.

Be interesting know pitch type and if the catcher was receiving with one knee on the ground? Seem like a lot of pitchers today spend a lot of time developing velocity but minimal with command.

Yeah, I’ve seen a couple pitches a yard out of the strike zone.

Different grips and trying to get more spend on the ball is what a analyst had said in a game I watched recently.

Arkansas has been the benificiary of more wild pitches from our opponents this year than I can ever remember.

A friend and I were discussing that earlier today.

With an early 11 run lead why would you over complicate pitches and not place your focus on fastball locations and pitching to contact and getting outs from those locations.

Science is helping pitchers improve, and quickly. Hi-Res video evaluation helps pitchers create an identical motion and release point for each of their pitches. It is called tunneling, and means that every different pitch goes through the same “tunnel” as the others. This creates deception, as in the past pitchers would have noticeably different arm slots or release points for each pitch. Hitters learned to watch for this and so pitchers adapted.

Spin rate increases the influence of the grip, arm slot, and release action.

Mariano Rivera (and now, to a lesser extent, Kenley Janzen) made a living throwing a cutter. Check out Emanuel Clase of Cleveland, who throws a 100 MPH cutter! The cutter is a fastball thrown with the spin rotating slightly off-center. Where the normal fastball spins 6/12 (backspin) the cutter will be 4/10 or 8/2 depending on being lefty or righty. It generally is only a few MPH off the fastball but moves laterally 8-14 inches at the end of the pitch due to the offset spin. It is like a slider without rotating the wrist (which gives the slider its “cement mixer” 3/9 or 9/3 spin). You throw a fastball with the first two fingers on top, but a cutter is thrown like you are trying to throw a spiral with a football, with the side of the index finger on top.

Trevor Bauer took this concept and created a brand new pitch. He would throw the ball, watch the hi-res camera, tweak, and throw another pitch. He throws a traditional fastball with a new grip. If you view a fastball or curveball from the dugouts you see the white of the ball on the side. Bauer figured out how to get the glove side of the ball to be nothing but red seam. Its like the ball spins with the seam as its axis. On the other side, though, is still a white side of the ball without a seam appearing. As it moves through the air, the seam side catches air and pushes the ball towards the white side of the ball. Thus, Bauer’s “Laminar Express” (Laminar is the aerodynamic effect, I think) hits 96-98 and breaks arm-side like a flat slider, good lateral movement with little drop.

But…yeah…if you aren’t Trevor Bauer that pitch is all over the place. My son talks about how his pitches change movement still (normal for a young HS kid) but that it frustrates the catchers, who are not able to read things well enough to avoid being “crossed up” at times. We played catch together this morning and he was working his changeup grip. Sometimes it exploded armside, like Bauer’s (but not quite 96!!)k. Other times, he hooked it a bit with his middle finger and it was slower and acted like a slider (going the opposite way as the other pitch, with a lot more vertical change). If he doesn’t catch much seam it tumbles like a Bruce Sutter split finger, dropping down late.k

So, some if the pitchers not repeating well, and the catcher’s not being able to read it yet. And, if being thrown 90+ its going to be tough to read. And, some is the artificial production of velocity (where the pitcher effectively overthrows and command goes out the window).

Sorry for the long reply.

Now my head is spinning.

Aerodynamics has entered baseball. In my day no one had a 100MPH fastball.

Good analysis, and got me wondering about something I hadn’t thought of in a while. When I was a kid, my favorite pitcher was Warren Spahn. One of his best pitches was a killer screwball (or “scroogie”, as he called it.). It broke in the opposite direction from a traditional curve ball. Does anybody throw a screwball these days? Or has it evolved and is going by a different name nowadays?

I’ll hang up and listen.

Hector Santiago of several teams, most recently the Mets, was the last MLB pitcher to use the screwball. Santiago pitched last winter in the Puerto Rico league but hasn’t been in MLB since a brief stint in 2019.

Some people think the rotation of the wrist in throwing the screwball is hard on the arm; others say that protects the ulnar collateral ligament, which is what requires Tommy John surgery when it is torn. But if anyone’s throwing the scroogie now in MLB I can’t find it.

Fernando Valenzuela of the Dodgers had the nastiest screwball I ever seen.
I think that pitch has morphed into some sort of breaking ball or slider over the years.
Back in the day it was thought to be the most damaging pitch to a pitchers arm.
It would have been to me, because the only way I could throw one (or attempt to) was side arm to get the opposite rotation opposed to just twisting the wrist the opposite of a curve ball like the pros did.

Mike Cueller of the Orioles was another P known for his screwball.

No one seems to throw it anymore. It’s probably hard on the arm. 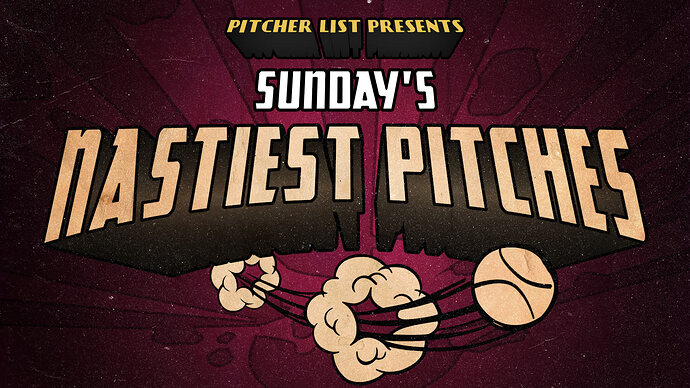 Start the work week off with the nastiest pitches from Sunday baseball.

This is a great website for baseball nuts, and you can sign up to get the daily “nastiest pitches” in your inbox. Scroll down the link past Kershaw’s curve to Brent Honeywell (making his MLB debut, by the way). His entry is classified a screwball but its actually a changeup. Some call it a vulcan (think Spock, Star Trek) grip where two fingers are split from the other two and as much ball shoved between as possible (cheap explanation).

Unlike most changeups from my youth, when we were taught to bury the ball in your hand, this is gripped out in the fingers and Honeywell has a long deliver that features the middle finger being the last to contact the ball. The ball rolls off sideways (remember Francisco Liriano’s changeup? same spin) and spins like a top, breaking back arm-side.

A great book: “K: The History of Baseball in Ten Pitches” by Tyler Kepner refers to Tug McGraw as a true screwball pitcher, but that it took an injury for him to be able to throw that way. You cannot straighten the elbow if throwing a screwgie, and Tug had an elbow deal that meant if he got way on top of the ball, his bent elbow allowed him to throw a screwball.

The old-timers threw the screwball constantly and pitched complete games and/or late into virtually every game. Modern baseball doesn’t throw it and all seem to be on pitch counts and have a good outing if they cover six innings. Pitchers seem to be dropping like raindrops with injuries in today’s game. A strange result to say the least.

Hadn’t thought about the many wild pitches, but in an earlier post I mentioned how there seem to be more cases of batters being hit by a pitch and also of walks. I don’t think that there has been any improvement in either of these, and now that I think of it there do seem to have been an inordinate number of wild pitches also. Perhaps the current ability and emphasis on 90+ MPH velocity is the answer as stated by another poster in this thread. Also much thanks for the tutorial on different pitches by several posters. My head is “spinning” also, but some of the information sunk in and all was interesting/helpful.