Interesting tidbit on recruiting in Texas

From Max Olson, The Athletic’s Big 12 writer (who actually lives in Nebraska).

Compares the number of blue chips that schools signed out of Texas in the five years before A&M left the B12 and the nine years after.

Numbers weren’t great for Arkansas in either group, put it that way. 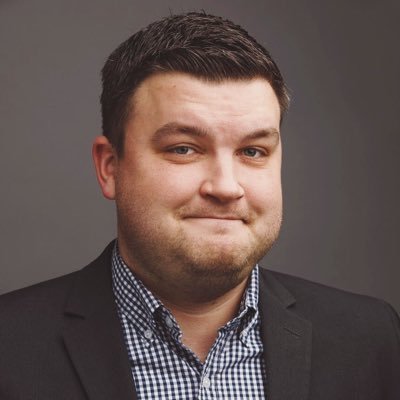 Two years ago, I looked at how Texas A&M’s move to the SEC impacted the recruiting landscape in Texas. Figured now might be a good time to update those charts... bit.ly/2JRJlgf https://t.co/yr0ACUjpra 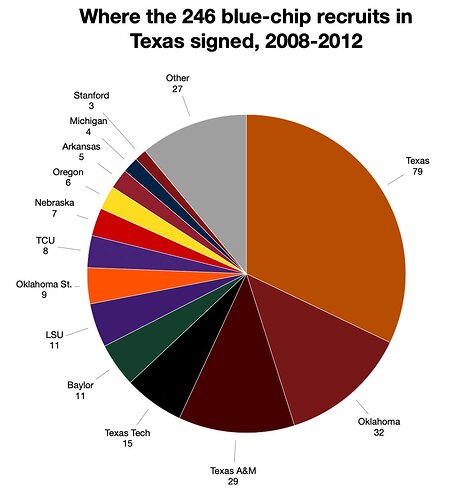 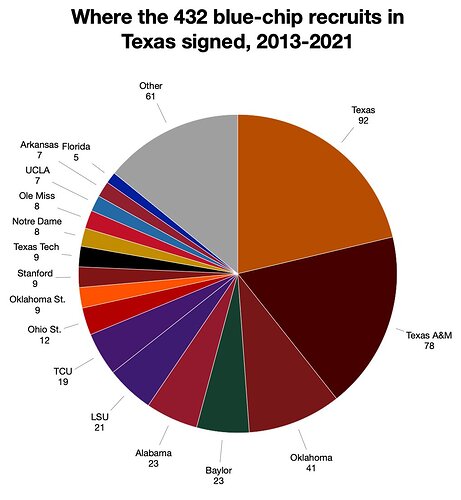 When you look at the numbers. Moving forward factor in Texas and Oklahoma. A&M numbers at 41 avg should decrease overall and signing 7 a year for Arkansas should remain . The we are the only SEC school in Texas no longer is an advantage for the Aggies. Our focus could change in that we go after the Tech,Baylor, and TCU 4 star recruits and get our share focusing on East Texas, and now Houston with Guitons connections , Carter’s, and Briles.

That’s not seven a year, Clay. That’s seven total in nine years. But TAM went from averaging about 6 a year before the SEC to averaging nearly 9 as an SEC member. That should be reeled in a bit. Oklahoma’s Texas average went down but at the same time their recruiting has become more national.

Olson pointed out later in the thread that if you include UT and OU as SEC schools, about two-thirds of the blue chips (4 and 5 stars is his definition; not sure whose ranking he is using) are signing with the SEC. Which is going to make life tough on the Orphan Eight.

Also interesting that since TAM left, Stanford, Ohio State and ND have become players in the Texas blue chip market, where they really weren’t before (with the occasional exception like Andrew Luck, who signed with the Thunderchickens in 2008)

The interesting thing that no one has mentioned is that Alabama went from NO Texas blue chips in a 5 year span to about 3 a year after the Aggies joined the conference. More than 3 times as many as Arkansas signed. LSU’s Texas yield doubled, and Florida signed 5 (vs. zero in the prior graph). Heck…Ole Miss signed one more Texan than we did in that same post-Aggies period.

My interpretation - Aggies in the SEC made many more Texas prospects open to leaving the Big 12 and giving other SEC schools a look. Unfortunately for Arkansas…who has tradition recruiting there…we had “hot piss” Bozo, then Bielema alienating some prominent Texas High School coaches, and then the Chadster came to town. We kind of frittered our opportunity to gain some ground.

Will be interesting to see how we do these next few years with Texas and OU moving. My expectation is that we will settle in at 2-4 Texans a year, with 2 or 3 from Oklahoma, a couple from Missouri, one or two each from Louisiana, Mississippi, Tennessee and Georgia, along with 5-6 from Arkansas.

Those are shocking numbers that we must change drastically if we intend to be competitive with the upper half of the SEC. I really believe we need to get 6 and probably more as an average. We probably had 35% or more of our team from Texas when we were a top 10 to top 20 program. We had to have some week coaching for a long period to get to this pitiful state. Too much talent in their top 150 for us to miss out on.

Exactly. Bama was “others” in the first chart. So were Stanford and ND and tOSU.

Unless they are serious brains, no way Stanford should be able to out recruit us in Texas. We have been falling down on the job in recruiting Texas. With Texas and OU coming to the SEC, I think our recruiting in Dallas/Fort Worth and N Texas will see a big uptick. It will require some focus but I believe CSP knows where the studs are.

I remember a couple of them. One was a pretty redhead that we all hated in Calculus 1, she kept the curve too high. You have a good memory. I really thought we would get Solomon. You can see the smarts in his face. I love the Stanford campus and ND compares nicely but Palo Alto puts South Bend to shame. I always hate it when we are pursuing an athlete and they say they are going to visit Stanford. That place is beautiful. So, I figure if their parents can drive to Fayetteville for a game, we have a great shot with them. Fayetteville is beautiful and the school sure has plenty to offer to help develop athletes.

I looked at some Ivy schools coming out of HS but Stanford didn’t enter my mind. Maybe it should have. I would have been a year ahead of John Elway.

Have to hand it to BB on that one. We didn’t land Thomas but I’d say his talent evaluation in that case was spot on.

It’s just to blame cold in the NE. But I do love Boston and Harvard has a somber feel to it. I was a bit in awe of it.
Great Barrington, MA. is also beautiful and AIER is dear to my heart, and nearby Stockbridge is a great place to visit-don’t breathe in too deeply- it has a grassy smell sometimes and go thru the Norman Rockwell Museum. Bunch of really rich folk live in that area.

My guess is that the kids that Stanford are going after choose them for the education. We can’t offer that level of education. They’ll win that battle every time.