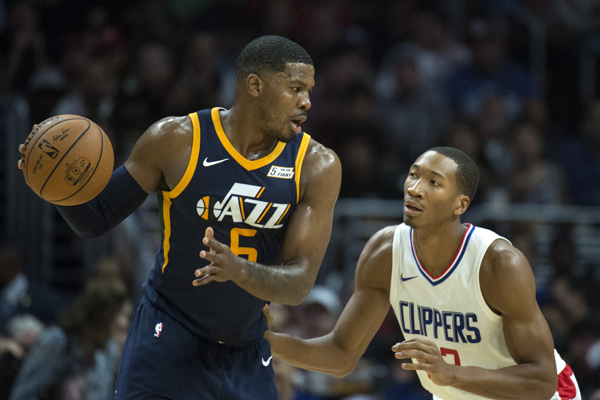 The Hawks will now be known as the Arkansas Joe Johnson Hawks.

“For me, it’s a just a small token of me giving back and trying to help out the youth,” said Johnson, now a member of the Utah Jazz. “Especially the kids because I was once in their shoes and playing … for us it was AAU basketball. I just really want to be hands on with it and having the relationship that me and Bill Ingram have from him coaching me I only see positive things coming out of this.”

“I’m going to be highly involved. I’ve even thought about doing some coaching.”

Johnson, who’s in his 17th season in the NBA, became the 42nd player in league history to score 20,000 points in a career last season. Ingram said the timing is right for Johnson, 36, to get involved with his former team.

Numerous Hawks have earned scholarships to four-year-schools, including current University of Arkansas, Fayetteville players Daryl Macon and Trey Thompson. Ingram believes Johnson will be a good example for the kids.

“He couldn’t be a more perfect role model,” Ingram said. “He’s been in the league for 17 years now and even going back to high school, to the U of A and we’ve never, never read about him in the newspaper for any kind of a scandal.”

“I wanted him when he had time to work with these kids. It’s more important for them to learn how to be solid citizens and be productive in society.”

Johnson was selected by the Boston Celtics with the 10th overall pick in the 2001 NBA Draft after being an All-American as a sophomore and the SEC Freshman of the Year in the SEC.

The former Little Rock Central Tiger said playing for Ingram and the Hawks helped him in several ways.

“It meant a lot it, gave me a sense of direction, kept me out of trouble, gave me something to do,” Johnson said. “It also filled my passion for the game of basketball. Getting a chance to go to nationals and win a championship.”

Playing with the Hawks allows kids to experience new things, including often flying for the first time.

“It gave me an opportunity to see a different side of the world,” Johnson said. “I had played on AAU teams, but playing with the Hawks was obviously very prestigious, and they always had great players.”

Ingram was able to convince Johnson to play his last year of spring and summer basketball with the Hawks by foreshadowing his future.

“I said, “I promise you if you play this summer with us you’re going to win a national championship and you’re going to be the MVP.’ ” Ingram said. “That summer he averaged a triple-double.”

Johnson said Ingram was a player’s coach that knew how to get the most out of his players.

“He’s definitely one of the greatest coaches I’ve ever played for because he let you be you as far as a basketball player,” Johnson said. “With me being one of the tallest players on the team he still let me play the point guard position and handle the rock and make decisions. He helped me out in probably ways than he even knows.”