I'M not the coach

And I’m so thankful Muss is.
Just thoughts here.
WHY do I cringe EVERYTIME C.L. dribbles the ball???
Looks like it’s as easy as taking candy from a baby when taking the ball from him.
I wonder what C.M. sees in him.

A lot different idea about Lykes than any of us on the board! He missed back to back free throws last night and that is suppose to his calling card.
He is a rally killer and can throw a double digit lead away on a flash.

And missed a layup. And if I’m not mistaken he’s a senior.
IFMuss feels like he’s got to play him then play him the first two minutes of the game.
Dear Lord, not when it’s a nail biter with only 3 minutes or less left.

if JD didn’t get in foul trouble and eventually foul out, i doubt lykes would’ve seen the court in 2nd half of OT

I’m struggling to know why Jaxson Robinson, who started a couple of games recently, isn’t a better option than Lykes.

He’s tall, can shoot, and is he really that much worse on the dribble and ball control player than Lykes? Is he a worse defender? Hard to imagine that. Seems like there is more upside than downside comparing the two options.

if JD didn’t get in foul trouble and eventually foul out, i doubt lykes would’ve seen the court in 2nd half of OT

JD can’t play 40 minutes every game, still I don’t see that as a reason to give Lykes minutes

WHY do I cringe EVERYTIME C.L. dribbles the ball???

Clearly Desi Sills was a better option on both ends of the court. Still scratching my head.

Desi Sills made himself not an option.

Players don’t play this year because they can’t play defense. When we shortened the bench, and quit experimenting so much, the defense got a LOT better. We held a good A&M team to a very low shooting percentage. If THEY don’t hit 19/20 or whatever from the line it doesn’t go overtime.

Conversely, as noted, if Lykes hits a FT or two we don’t go OT.

Lykes inspired me and the guy in front of me to talk about being a youth hoops coach. I said watching Lykes is like coaching 5th grade travel ball - “quit dribbling! Pass one dribble earlier.”

My son leaned over and said, “his favorite quote was, ‘One pass is good, two passes are better, three passes are a layup.’” That he still remembers as a JR in HS tells me I said it a lot.

When Jaxson Robinson started, he did nothing. Zero points, 1 rebound against A&M the first time. Would have been crazy to put him back in the lineup after that non-performance.

We call Lykes a dribble waiting for a turnover

As we all cringed, we did win the game with Lykes on the floor. With Devo who got the last assist.

Just an honest question, who would you rather see on the floor…Jaxson or Lykes? It’s pretty simple for me. We have Jaxson for 3 more years, and Lykes has been a momentum killer this year. I would ride with the young gun. Lykes was a recruiting miss, and I love Jaxson’s upside. JMO.

If Jaxson is going to be a nonentity, he doesn’t need or deserve to be out there. Same with KK. Your play gets you minutes, not the stars on your recruiting profile.

Lykes has produced a lot more than Jaxson who had one decent game. Lykes won two or three early games for us at the line.

Darn, Jeremy, I thought Nolan might have taught you some basketball.

Everyone is locked in on the TO’s by Lykes which he had 2 in 10-11 minutes of play. But he hit a 3 & a 2 pt shots, got a steal, a block even, made a couple of good assists.
The missed FT’s late were a surprise but he also hit a couple earlier I believe.

Though Arkansas came out on the winning side, it was minus-10 in Lykes’ 11 minutes. The Razorbacks were minus-16 in his first eight minutes on the floor.

That -10 for Lykes tells a different story than just the good or the bad. It attempts to note how the game played out with him on the floor.

Lol. You must be right, Jeff. Lykes has been awesome…exactly what we needed from the PG spot…except he’s not, and neither is Devo. Muss has made some mistakes, but that’s OK. He will learn from them. As far as what I learned from Coach Richardson, you have no idea, and I have no desire to break it down for you. Coach Richardson taught me way more about life than he ever taught me about basketball. 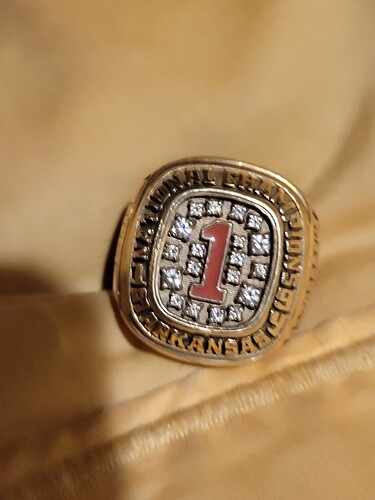 Dudley can you take us back to Eddie Sutton as well. Lol

He’s produced a lot of turnovers. Beyond that, I’m not sure. Now he’s missing the FTs he was making earlier in the season. The criticism of Lykes is justified, imo.