I had a Peanut Butter and Chocolate stout at the Bathhouse Brewery in Hot Springs a few years ago that was incredible. Hoping this is similar. 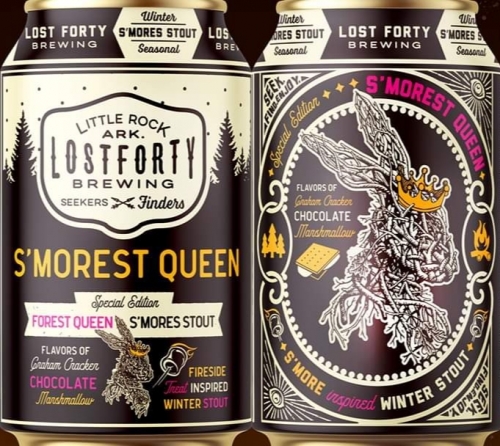 S'Morest Queen Stout by Lost Forty Brewing is a Stout - Milk / Sweet which has a rating of 3.6 out of 5, with 948 ratings and reviews on Untappd.

I’m a fan. I don’t think that you will be disappointed.

Everyone that’s had it loves it. Review coming.

Have you tried Flyway beers?

I haven’t but plan to. One of the guys in the office loves Flyway. He lives a couple blocks from the brewery. The food is top notch.

Once this pandemic is over, I’m there.

Was over there tonight drinking Magdalene Tripel. Love Flyway.

Flyway’s owners are REALLY nice, love to give folks a tour of their operation. and their food is as good as the beer. great little spot. we had dinner last night at Capeo, also Argenta, RD you’d love both of them. and of course I love Lost 40. very cool part of our community to have these types of businesses here.

Flyway’s owners are REALLY nice, love to give folks a tour of their operation. and their food is as good as the beer. great little spot. we had dinner last night at Capeo, also Argenta, RD you’d love both of them. and of course I love Lost 40. very cool part of our community to have these types of businesses here.

Great to hear that. I have a connection there. I will pass it on. You should try the new restaurant Brood and Barley, opened by the Flyway owners on the Main Street. More pricey than the Flyway restaurant but classy.

With credit to Pete Seeger - sung to the tune of Where have all the Flowers gone:

So, the bartender asks me, what do you want to drink. I reply a “Coors Light”. He says what the heck is that? I say, OK, how about a Bud Light"? He says huh? I just shake my head and continue down the street looking for a real bar.

I’ve heard of BB and definitely want to check them out.

It is hilarious reading someone call bud lite and coors lite “real beer”. As Monty Python said, they’re like making love in a canoe.

It is hilarious reading someone call bud lite and coors lite “real beer”. As Monty Python said, they’re like making love in a canoe.

Well, there must be lots of people making love in a canoe, since they are two of the largest selling beers in the country. I haven’t tried that, but I may have to give it a go. sounds kinda cozy.

Hard to believe that chocolate in beer would be considered “real beer”.

McDonalds and Burger King sell a lot of burgers, but wouldn’t you really rather have one from about fifty other places?

Seriously, beer preference is one of the most personal things I can imagine. I used to drink Bud Light/Miller Lite, now I don’t because I like others a lot more. Coors Light I’ve never liked.

I’m with you on chocolate in beer. I don’t like coffee flavoring or most fruit in beer either. Honey is usually a good ingredient.

I got a friend who tried to get me to drink Frio. He was going on price. I refused to try it. He brought some on a Colorado trip. Strange thing, he drank my beer and his Frio stayed in the Yeti.

It was his Yeti. I asked him why he would spend so much on an ice chest and so little on beer?

I had the same thought when I had the peanut butter and chocolate a few years ago. I didn’t know what to expect but it was amazing. It was made by a Wisconsin brewery and I’ve been looking for it since.

Seriously, beer preference is one of the most personal things I can imagine.

Agree, plus for me it is/was an acquired taste. In college, I decided I liked Bud the best and drank that for several years. My first year in the army, I was just drinking Bud. Then I went to Japan and hated Japanese beer when I first tasted it. Then, since I could only buy Bud one place on base, I decided to try another Japanese beer. I decided I hated Asahi, but Kirin was OK and a few months later, I really liked it.

Well, 2 years later, I was released from the army in San Francisco, so a group of us, of course went out on the town to experience real America again. I ordered a Bud, and thought OMG, this is terrible. Being in California, of course they had Kirin beer at most bars. For the next few months or so, I drank mostly Kirin.

I still couldn’t stand Bud and was tired of hunting places that sold Kirin, so I decided I liked Heinekin. That lasted a few years. Next, I drank Bud Light for a few years. Eventually got awful headaches after 2 Bud Lights. I’ve been a Miller Lite or Coors Light guy with a preference for Coors the last 15 years. I’ve tried all the new local draft beers, but never found any I liked.

I have never really developed a taste for beer. I’ve tried several. My favorite was probably St. Pauli Girl dark. Even then, about half of it was all that I wanted. I finally gave up. A friend and I have been going out to eat after our dog training class on Tuesdays. When the weather was decent, we would go to Smitty’s Garage for a burger and a brew. (We can take our dogs with us to the patio.) She drinks beer and I drink Angry Orchard. I can also go for a Mike’s Hard lemonade. Mike’s got really hard to find for a while during this summer of staying home.

The only time I’ve enjoyed beer is after a day of bailing hay back in the day. Typically Miller pony’s. Recently we bought some Corona Light for my son in law. I’ve been having one of those a couple times a week recently. Not bad with a burger.

Having had bad experiences in my 20’s from liquor I’ve stayed away from it for the most part.

My wife enjoys a glass of wine and I’ll have one on occasion.