If you’re in Omaha

@ArRecruitingGuy
Razorback fans headed to Omaha should stop by the legendary The Drover while in town rooting on the Hogs. One of the owners Amy Leise and her son ‘23 QB Parker Leise visited Arkansas for a football camp last summer. Great people. Go see them. droverrestaurant.com/news/

Go see them. I was trading texts with Amy and she said lot of the teams eat there while in town. The Ole Miss coaches & players are eating there for lunch tomorrow. A party of 50.

Ole Miss eating there? Tell yhem to count their silverware.

Arsenic in the ketchup please!

The Drover and Spaghetti Works in the Old Market are must stops every time Arkansas goes.

Omaha has a pretty nice zoo if parents are taking kids.

Omaha has a pretty nice zoo if parents are taking kids.

Megan is from Pierce, Neb. so the zoo is a big source of pride for her. It is a very nice zoo.

We visited it the time Arkansas played at Rosenblatt since they were next door to each other.

The zoo bought and demolished Rosenblatt after the CWS moved downtown; part of the site is now a park called Infield at the Zoo. 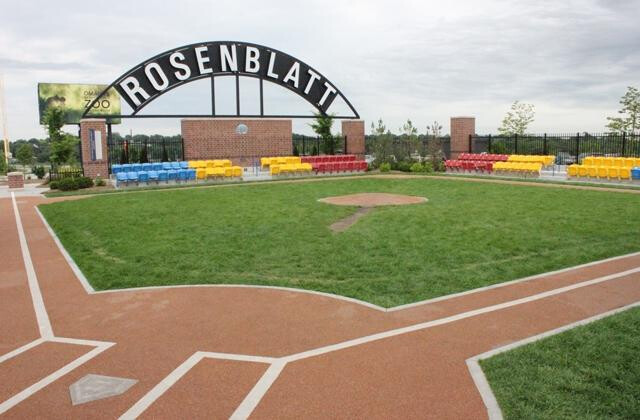 Not big on Nebraska for the most part but I really like Omaha. Actually has some hills and trees.

The downtown area has a TON of bars and restaurants.

Yeah, I explored the city some when I was there in 2018, My friend lives in Carter Lake, which by a quirk of the Missouri River is on the Nebraska side of the river but is part of Iowa. It’s a 9 minute drive from the ballpark and you have to drive through Carter Lake to get to/from the Omaha airport. And I drove around when I wasn’t at the ballpark.

Omaha is a fun town. This will be my sixth time to cover the CWS. I’ve counted it up and I’ve spent close to two months of my life there because of some long stays.

I’ve counted it up and I’ve spent close to two months of my life there because of some long stays.

And here is hoping you have another long stay.

I have a hotel room booked for two weeks. I book a room every winter with a 48-hour cancelation policy in case the Razorbacks are knocked out in the regional or super regional. It’s something I learned to do from some beat writers at LSU many years ago because of the way rates sky rocket during the week of the CWS. It seems it works better now for those who cover Arkansas.

Close to the park I’m assuming? You drive to as well?

There’s a somewhat fancy restaurant called Spencers steak and chops that I will visit every time I’m in town.

I’m not far from the park, probably a 10-minute drive. I’ll drive up tonight. Media day is tomorrow.

Ok, just getting ideas for my nxt visit, gonna try and make it if we make it to championship week. Never hurts to learn new tips.

If you want to see a massive two-story sporting goods store with a ferris wheel in the middle, check out Scheels. Its a Midwest franchise and I like going by there each time I’m in town. They have a lot of good CWS gear, so I’ll typically buy a hat or something.

In midtown on Dodge St. is a restaurant called B & G Tasty Foods, which has loose meat sandwiches. Runza is another locally started sandwich shop.

There are several good food options in the Old Market. I’m a fan of Zio’s Pizzeria. DJ’s Dugout is a good sports bar downtown and it’s a relatively short walk from the ballpark.

The zoo in Omaha is apparently great. I’ve never taken the time to go, but my wife has taken my son and raved about it.

Those are some things off the top of my head.

Just by the name alone, you have to try Hog Wild Pit BBQ on 108th Street. I went there in '18 and it was excellent. Or Swine Dining on West Dodge Road; I did not try that last time.

There’s a Scheel’s in the Dallas-FW area now. (in The Colony). Cool store.