If willing to pay, who is likely OC?

Waiting this long tells us CSP is putting a tremendous amount of thought into this process. Don’t know who all CSP has reached out to or how many have reached out to our coach interested in the job. Wait and see and speculate is all we can do at this time, I do like his staff so far though. WPS

Hard to figure out what is going on but I am intrigued by the possibilities. Pittman might be just taking due diligence to make this decision but there are so many other possibilities. I agree that what he has done so far with the staff has been excellent but getting this OC hire right might be the most important of all because it will illustrate to some degree his offensive philosophy.

Doing Due Diligence - certainly a possibility but I personally think it is more likely that he knew who he wanted the minute he got the job. He certainly had no trouble making a decision on his DC. I think he is waiting on someone or something.

Approval - several of those mentioned as candidates have some baggage issues that could possibly be slowing down the approval process. I don’t know if Pittman has the final say or not but I do know the AD has to recommend to the Board and they have to approve. This might be a possibility but I would hope all the vetting was done prior to interviews but it could be that the vetting is the last part of the process.

Still Coaching - of all the rumored candidates there are only two that are known to still be coaching. Maybe there are candidates that no one knows about but if the list of potential candidates is accurate Briles and Nussmeier ( Dallas T E coach ) are the only two still actually coaching teams. MA is still in that advisory role with Alabama and most if not all are probably still obligated in various ways to their contracts that could require payoffs etc.

Briles Contract - he signed a 3 year deal paying for a total of 1 m per year of which 200,000 came from state funds and 800,000 from booster funds. If let go without cause it appears that he will receive 85% of the remaining amount left on the 3 year deal. The contract has that seek employment and if hired dollar for dollar off-set. He could be hired on the cheap and with his guarantee from FSU still make roughly 1 million per year but going over the 1 m salary would eliminate FSU money so all this is complicated. He is also still being paid to coach FSU for their bowl game and that too could be holding up things. He may not be the target but all of these circumstances surrounding him sure provide some fertile ground for speculation.

Another Rumor - Lance Thompson who coached yesterday in bowl game might be one that Pittman referenced regarding coaches being involved in bowl games. This guy has a lot of experience and has received two national recruiting awards. Currently a defensive line coach. Seems like a Pittman type guy.

There were some unconfirmed comments last week that $ issues on some of the possible prospects for coaching positions might be influenced by $ that changes after Jan 1, 2020 with their current teams . Not knowing the particulars of the individuals hard to access but that makes some sense if true. Again not sure who or what $ would be but it is to Arkansas’s benefit to wait until after Jan 1 as I understand it. These positions are not for OC.

Look around the SEC at all the checkered Head Coaches in basketball that have been fired, those that have been brought up in the FBI scandal, and all the retreads working at Bama and you may come to the same conclusion that I have! Money is all that matters to the SEC! If our AD and BOT approve it’s a done deal.
MONEY! That’s all it could be.

I think the same thing

And if it’s an NFL guy, first name that comes to mind is Dowell Loggains. Who will absolutely be available next Monday.

I’m not sure it’s him, but I wouldn’t be surprised if it was.

I’m not sure it’s him, but I wouldn’t be surprised if it was.

Loggains would just be a possibility. Sam may surprise us yet.

Very true. He could hire

and melt the board down

Do we really want a guy who’s offense are some of the worst in the NFL every year? Please no.

Do we really want a guy who’s offense are some of the worst in the NFL every year? Please no.

You have trashed everyone whose name is suggested. Who do you want?

His first year with Jay Cutler in Chicago, he got him to pass for 3629 yards with 21 TDs and only 11 picks. But I guess he had nothing to do with that, did he?

I expect Briles to be the OC. 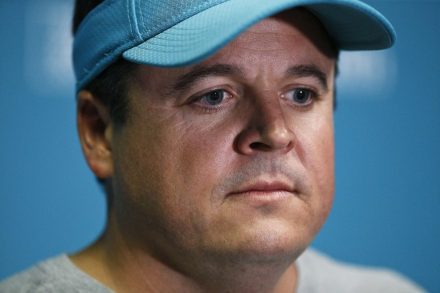 If Jets hire Dowell Loggains, it won't be based on merit

Now that Miami Dolphins offensive coordinator Dowell Loggains has the freedom to speak with other teams, it’s almost certain that he will join his old friend Adam Gase on the Jets coaching st…

His offenses have been some of the worst in the NFL every year he has been an OC. I have only trashed two names that have been mentioned Applewhite and now Loggains. Both because of their lack of results.

That’s a Jets fan site. That would be like someone linking to one of your posts. He hasn’t had the greatest results as OC, but he also hasn’t had the best talent to work with. If he had had great results, he’d probably be an HC now and not available. And I think they’ve done OK this year in New York. Darnold has cut way down on the interceptions after he got picked seven times in two games early. And they’ve gone from 1-7 to 5-9.

It is not just NY. Look at his offense at Tennessee, Chicago, Miami, and now NY. All terrible.

I expect Briles to be the OC.

Hope it is Briles. He has TX recruiting connections & good history as OC.

Believe issues with Briles at Baylor are in the past & trust HY & CSP have safeguards in place to assure we maintain a clean program.