"If I was Tom Brady, I would never be playing this season"

Sports Illustrated talked to 146 doctors with COVID-19-related experience and asked them if they would play this season if they were a pro athlete. Consensus: NBA and NHL, yes; MLB and NFL, no. One doctor noted the cost-benefit ratio for a young NFL player trying to establish his career versus an established veteran with a lot of money already in the bank. He said if he were the rookie, he would probably play. As for a big-bucks vet, see the thread headline. 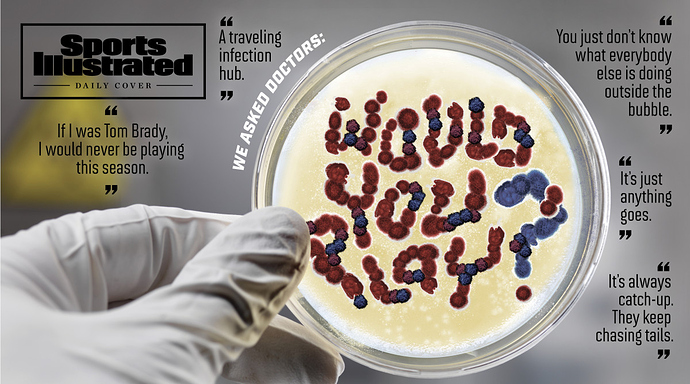 SI Survey: Doctors Say They'd Play in the NBA and NHL, but not NFL and MLB

Nearly 150 doctors with expertise related to COVID-19 responded to SI's questions. The results were stark.

Wonder if Tom has socked away enough to retire at this point without having to shop at Walmart or clip grocery coupons? I’m thinking he probably has.

The problem with being a doctor is that you see all the worst stuff possible. You almost see too much and know too much. If I were a doctor and saw all this, I would run screaming into the night, too. I almost wish I had not read the article. Now I am really hacked off at the Chinese. They didn’t know, or maybe they did know, what they were unleashing on the world.

If only his wife had a decent job where they could make ends meet.

MLB? The only time they are not socially distanced is at the plate or in the dugout. I would think it would be much safer than NBA or NHL.

It’s because of the protocols each sport has (or hasn’t) introduced to isolate the players.

He just wants another free trip to Disney World.

I love my doctors, but my experience is they think living is being alive. Don’t smoke, don’t drink, don’t ride motorcycles, don’t go to high risk areas, lose weight, lay off the sugar and salt, don’t play football if you have plenty of money. There’s only one problem, these doctors don’t understand that not doing these things for some is death. Tom Brady didn’t get to where he is because he thought about money. And he only takes care of his body to keep playing. He wants to play. That’s it. There is no next year. There’s just this year. That’s the same for many folks. Live now, worry later.

sorry, but that is not good advice in general. I’m 85 and most of my friends who did those things you mentioned are dead. Sports is a good activity however.

Sure, but do you think they regret their decisions? My point is life is what you want it to be, not how long you live… for some.

He loves to play the game; that is his choice.