--------------- would be eager to tour our facilities when playing the Hogs @ Baum. Does HY & his staff do the honors or one of the assistant coaches? I would expect DVH to do it with an old friend head coach but not the others.

I remember a rumor that, when LSU quit playing us in Little Rock, that they were shocked at the quality of our facilities when they started playing us in Fayetteville. I bet the new Development Center is a huge “uh-oh, we got to up our game back home” for the baseball folks visiting for the first time. You hear a little of the shock from some of the TV announcers when they talk about BaumWalker and the new Center. I like it.

It’s impossible to keep the other schools from knowing about it, but I admit I wish we could. So Carolina basically came to Bud Walton & built its clone. Then they did the same with BWS–at least that’s what I’ve been told. SEC schools can spend that kind of money on baseball. I don’t know if they will. Schools outside the SEC can’t or won’t. (Well, Texas can & probably will but its stadium sucks.)

Texas has an easy answer. There’s a triple A ballpark in Round Rock. 22 miles up the road. They could play there for a year or two while completely redoing Disch-Falk. Heck, Bama played in Hoover for a year while they were fixing their stadium in Tuscaloser, and Hoover’s like the Hogs playing in Fort Smith.

I’d heard that about the Poultry’s Founders Park too, but in watching a few games from there (our series plus the regional just won by Virginia) I’m not seeing much similarity with BWS. No Hog Pen, the seating is configured a lot differently, etc. This is Founders Park: 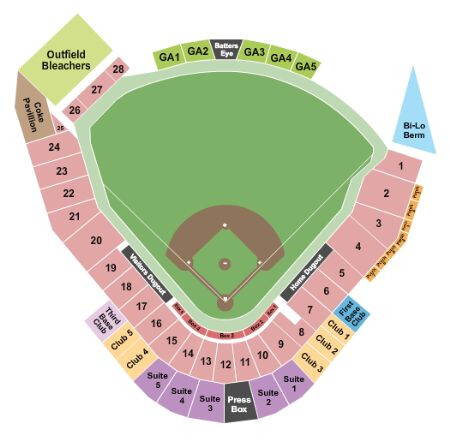 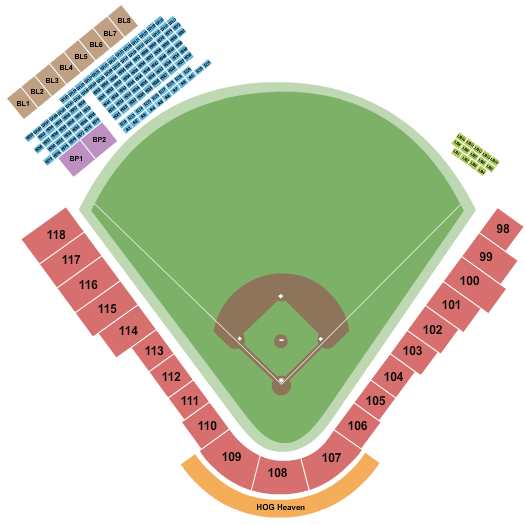 Okie Lite just built a brand new ballpark for $60 million with 3800 seats. You spent all that money for THIS?

Point being, just because they build something similar doesn’t mean they duplicate what we have.

I have a question about stadium designs. What is the best bullpen arrangement in a college stadium. During this year’s Regionals, I have seen “no bullpen”, just guys warming up out in the open on the sidelines with no protection from game action, all the way to our BWS arrangement with the two bullpens in the corners with a fence protecting them.

Are your two diagrams at the same scale? Is the barnyard fowl’s outfield that much smaller AND irregular compared to BWS?

Seems to me the best BP’s are enclosed either beyond the dugouts several feet beyond the foul line or like ours, just beyond the fence. I prefer our design, but to me the worst are like LSU’s–just open along the base lines & part of foul territory.

There are a few things that can be learned from BWS.

The exact layout is not what others have duplicated, but the amenities are.

I’ve been to several MLB parks IMO (maybe biased) Baum Walker is as fan friendly as any I’ve seen. Of coarse with less seating. My favorite MLB park is Camden Yard.

They are not to scale, but the Coop’s outfield is more irregular than ours. I got the diagrams from secondary ticket sites showing where you’re buying your tickets.

I’ve seen some tours happening at Baum. I think typically it is a member of the UA athletics department showing an administrator from another school around.

Jim Schlossnagle said a couple of years ago he took pictures and sent them to his AD, telling him Arkansas had, from a player development standpoint, what TCU needed.

The thing that I think is similar between Baum and Founders is that both have chair-back seats extending down both foul lines. You don’t see that with many college ballparks.

Good point. That is a similarity between the two

How does LSU’s facilities beyond the Box compare?

This is their baseball development center. Such as it is.

I believe Mister Lange might be mistaken or just a homer for the Corndogs:

“No one in the country can match Alex Box Stadium as a total baseball facility for both players and fans.”

I have never been in LSU’s baseball development areas, but what I found online doesn’t compare to the combination of the Fowler Center and Hunt Center. I don’t think anything does, honestly. Between those two facilities are 100,000 square feet of space used almost exclusively by the baseball team. Then you add the stadium.

I have been to quite a few mlb stadiums and Camden Yards is my favorite. Being a Red Sox fan it’s hard to beat Fenway. Best kettle corn I have ever had! Wasn’t Baum designed by same folks?

Baum was designed by Populous, a Kansas City-based firm that now does stadiums all over the world. They did Camden Yards, and Minute Maid in Houston, and Comerica in Detroit, and new Yankee Stadium (I count 22 current MLB parks they built or renovated) and Arvest Ballpark in Springdale, and the new Box in Baton Rouge, and about 10 soccer stadiums in England… you get the idea. In fact I have a book on stadium design which was written by an architect in Populous’ London office.

RRS, if you were wondering, was done by Heery, an Atlanta-based firm, in 2001, but the north end zone project was done by, yep, Populous.

I’ve been to Fenway once. The fans were unbelievable there. They kept me laughing all night. Wrigley was a hoot too. But the craziest fans I’ve ever seen is in Philly. They are nuts.