I was just looking at the '95 box score

Of the Final Four game against UNC. Some Tar Heel fan on Quora asked if UNC would have won the game if Jerry Stackhouse hadn’t been injured early in the game.

The future Vanderbilt coach scored 18 points that day, so he must not have been too badly injured. Stack took more free throws himself (10) than the entire Arkansas team (9).

But a couple of other things I noticed.

Scotty Thurman had a horrible game (2-10 from the field, 6 points). Al Dillard was even worse (0-5, no points). We didn’t shoot well (.378) and we didn’t get to the line. But we got 16 offensive rebounds against Stackhouse, Rasheed Wallace, etc., and won the turnover battle 15-9. So we got 18 more shot attempts than the Heels. And we also held them to 37% from the floor.

That’s the game where Dwight Stewart made the 55-foot shot right before halftime. Stewart scored 15, second high on the team to Corliss with 21.

Stackhouse took a knee to the thigh from Corliss Williamson on the first possession of that game and was slowed because of it. He played through it, but he wasn’t 100 percent.

You’ll see it in the video here, about 15 seconds in. 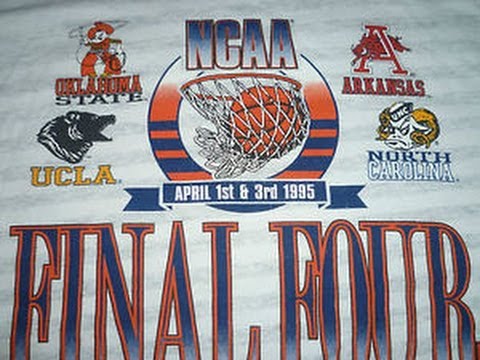 Didn’t Nolan say something to the effect after the UCLA loss that if Kareem Reid was eligible we would have won that game.

Reid was forced to sit out the 1994-95 season at the University of Arkansas because his ACT score was disputed by the NCAA.

He sure didn’t look or play injured during the 2nd half of that game. I still have the VCR tape of that contest. Nothing was said other than the sequence shown here about Stackhouse playing hurt. He must have took some treatment, or had some type of medication to lessen the pain, because he looked like the same Jerry Stackhouse I always saw that season. Billy Packer would have sure made a big deal out of Carolina playing without a healthy star player. He certainly did that in the championship game when Tyus Edney couldn’t play with his injured hand.

The key injury that weekend was just before halftime against UCLA when Clint ran into Corliss. Clint could not go in the second half.

If Missouri doesn’t let Tyus Edney go the length of the court in 4.3 seconds we win back-to-back nattys.

And then Edney further complicated it by not playing in the final and letting his sub Cameron Dollar do it to us.

By the way, I watched the other semi with mixed feelings. It was between Oklahoma State and UCLA. Had UCLA not won that, it would have been a pressure packed matchup with Eddie and OSU in the final. I could not decide who I wanted to win that semi, but finally in the last five minutes I pulled for UCLA.

Although I guess by that logic if Lawrence Moten doesn’t call a timeout we go out in the second round as well.

Also true. And Texas Southern had a halfcourt heave in the first round that also would have knocked us out. On the same floor where U.S. Reed knocked out Louisville with a half-court heave 14 years before.

The '95 team lived on the edge in the regular season and trailed in the second half of every game in the tournament. The champion gets everyone’s best shot.

The two close calls in Austin seem to be remembered best, but the one that stands out to me was the Sweet 16 game vs. Memphis in Kansas City. Memphis was up by 12 with seven minutes to play and had the Kansas crowd behind it. Arkansas finished regulation on a 16-4 run, started overtime on a 9-2 run and advanced to the Elite Eight. Kansas lost the next game to Virginia.

That Friday night in KC was high anxiety. Down by double digits in the 2nd half, and to the worst possible team. If you live east of Little Rock, Memphis St. was like the ultimate team to hate. Their media was absolutely savage in their dislike of UA and specifically Nolan Richardson. The feeling was very much mutual. I was as much relieved when didn’t lose to them as I was happy to win. Then only negative thoughts after the game was the knowledge we would have to play Kansas on Sunday in what would be a home game for them. I stayed up and was shocked, but so happy that Virginia pulled off that upset. Couldn’t sleep for a good while after that game, double dose of excitement, Hogs beat the chumps from Tiger High, and we now had a somewhat home game against Virginia.

The key injury that weekend was just before halftime against UCLA when Clint ran into Corliss. Clint could not go in the second half.

That was big, but I’ll go with the stress fracture that Corliss was playing with. He just wasn’t the same “Big Nasty” we had come to know in the Championship game. You can’t convince me that George Zidek plays like he did against a healthy Corliss.