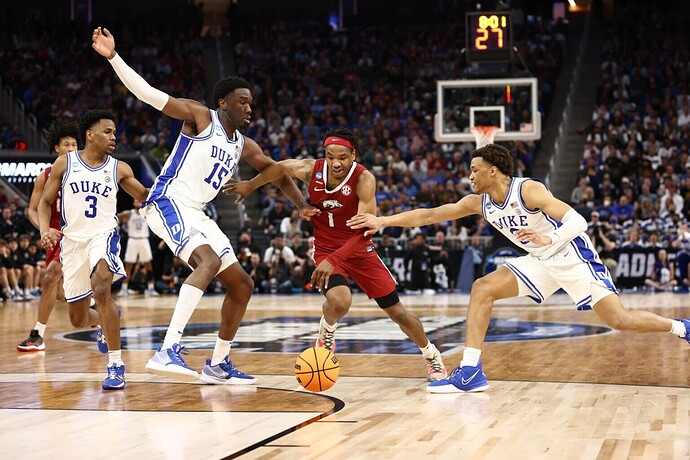 Two people fouling JD at once, and no call. (Photo from Getty Images via The Athletic website)

Yes!!! They swallowed the whistles when we had the ball. Took Toney out of his groove with ticky tack stuff. Oh well.

Par the course… that’s how it goes with blue bloods. Like one of the players said during the PC you have to play through it.

There was like a 10-2 fouls disadvantage to Gonzaga as well at one point in second half.

Either there is bias against us or simply protection of elite programs.

We did not lose to Duke because of officiating.

But NCAA has explaining to do and I hope this point is pressed at least from Gonzaga game alone.

And to think Coach K was livid in his first years at Duke because he said he got no respect and Dean Smith’s Tar Heels got all the calls.

You have to earn that respect. It’s not fair, but it’s how it is.

We will get there

They let them play, and I agree with it in a big Elite 8 game. Officiating is not even close to why we lost this game. You probably aren’t saying it was. In any event, we do depend on free throws to win games. But you knew going into the game that a lot of fouls wouldn’t be called. We lost because they were better 1-5. We will get there if Muss stays.

Officials want the players to decide the game and not be a reason for controversy. Same thing happened when Nolan’s teams were playing. Everyone complained about hand checking, but it was part of the allowed play at that time.

Here is the deal. Coach K is a Hall of Fame coach. And Duke is a terrific team.

They don’t need help from the officials.

Its disappointing and maddening when you see plays like Jeff showed above. We attacked the basket all night. Only shot 11 FT’s. Only 3 in the first half.

And they indeed took Toney…as well as JD…out of their defensive game with ticky tack fouls.

It’s just that they get help anyway.

Send that pic to Skip Bayless for his thoughts.

I will have to go back and look at the game. I didn’t think it was officiated that bad just on my initial reaction of watching it live. I may have overlooked a lot of them because I was still perturbed about us missing all the layups that could have kept us in or won the game. I will look at it closer because it appears we may have gotten the shaft and I didn’t realize it. I wouldn’t be surprised they definitely tried to give Gonzaga all the help they could and that was obvious watching it live… Final stats last night had each team with 15 fouls but the fouls we got took our better players away from us. Hopefully one day we will be getting the benefit in the big games.

Not just Duke, Bama football gets benefit of doubt as another example,

It really was a constant. JD got abused physically, as well as Williams. No calls killed us in multiple ways.

JD and JWill both mentioned it in the presser. JD said when you play a team like Duke you’re not going to get those calls, have to play on. JWill said they have to learn how to play through the contact. Which hints that there was alot of contact on those missed shots at the rim.

We’ve hung our hat on getting fouled and shooting FTs this year, refs were not going to let us play that game against Duke. So I get what JWill is saying, instead of just putting it up there and expecting a whistle, adapt and anticipate there will be no whistle, take it up more strongly and forcefully.

One thing, that nobody has mentioned, that was a definite factor in the officiating is that each team had 15 fouls but most of the fouls called on us were shooting fouls (thus Duke got to shoot more FT’s) while most of theirs were non shooting fouls (so even though the number of fouls were the same they benefited much more from the same number of fouls).
The officials allowed them to play much more physical against us on penetration and did not allow the same physicality from us on their drives to the basket or for pull up jumpers. Did Duke play better than us? Yes! But, they took away our defensive aggressiveness. Banchero, especially received protection on his jumpers even when he was falling away.

It was obvious early in the game that we wouldn’t get the contact calls. I was surprised we didn’t adjust and start going harder into the basket

This! Anybody with half a brain knows Duke gets the calls and non-calls from refs. As an opposing player, you can’t possibly be surprised.
The Hogs missed a TON of shots at the rim. Williams was too finessey around the rim and Toney and Wade acted like they expected every shot was going to be blocked.
Williams has to play bigger on offense. He makes a lot of up and under underhanded moves which negates his size.

There’s a lot of folks in this board that told me it wasn’t the refs! Well I’m not blind and I know the refs sent the tone and failed to allow the higs to play hard physical defense but allowed Duke to foul all game long.
Jay Bilas made a comment this week about refs getting the nod to call
The elite 8 after blowing calls in earlier games and said the refs have been real bad! Bad doesn’t describe the real truth. The refs are on the hype train for the coach K tour to the National Championship game by way of a final 4 game matchup against the star Heels. The Hogs weren’t going to screw that up.
Duke is more talented right now but the hogs will catch up next season.