I think this has been posted but if not 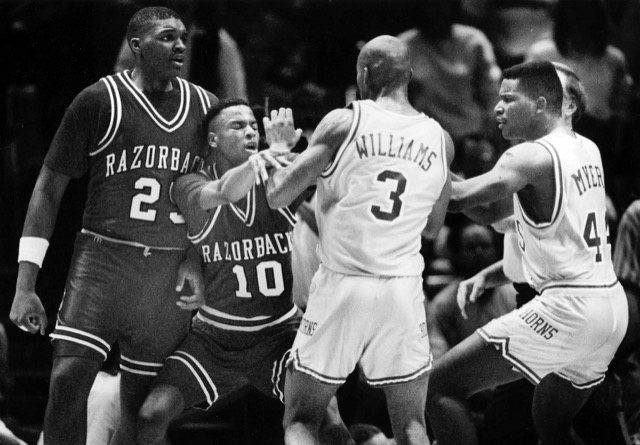 Thirty years ago: Texas-Arkansas, Strollin’ Nolan and the technical foul that...

Thirty years ago, the Texas and Arkansas men’s basketball teams were in the middle of successful seasons in the Southwest Conference and on a collision course for the Elite Eight when one of their more memorable moments occurred in Austin on Feb. 4,...

I couldn’t read this without a subscription but I remember that game well. Nolan just had to go to the bathroom…

I watched a replay of the end of this game on You Tube recently and loved every minute of it.

Any win against Texas is good but this one was special.

Guess I haven’t used up my allotted stories.

I was able to read it. Neat perspective from a Texas viewpoint.

Nolan comes back out of the dressing room for OT, looks at Tom and says: “We’re going to kick your butt.” Classic NR.

Lee Mayberry took the game over at the end and put it into overtime.

Lee Mayberry took the game over at the end and put it into overtime.

I think that’s the game where you wished he would do more of that.

Very good read! Thanks for sharing.

Great read!!! I was living in Jefferson City, Missouri that year. Its been a long time, but if I recall, ABC was showing a different game in Jeff City and I couldn’t watch it, just heard about it later? But I am not sure. I have seen the game several times now so I am not sure I didn’t watch it live at the time!

Great find. Thank-you. Made my day! I will always greatly relish that victory. It’s always great to beat EOE-A…most especially AT Austin! I met Lee Mayberry four years ago and thanked him for that tying three-pointer and winning the game. Told him it was my favorite win against the Longhorns.

I remember Nolan at the press conference saying “I had to go to the restroom.”

I always wished Lee would take over more. He was great but I don’t think he ever realized how great he was.

I was there for that game. What a game, what an environment, what a team, what a coach! I was a student at UT, and several of my best friends from hs, who were going to Fayetteville, had come down for the game, so it was a great weekend in general.

UT had Tom Penders (or, as Nolan called him-Sweet Tom the City Slicker) as coach and they were rolling with Travis Mays, Lance Blanks and Joey Wright (lots of “BMW” shirts on campus). AR had been stomping them in basketball, and had been competitive in FB and BB for that matter, and the campus was HYPED for this game. Pulling out all the stops, Penders and players on campus, signs out every encouragement you can imagine to get students there.

So the Drum was filled to capacity, which was a novelty for the Fallopians, as 2 years prior to that, NOBODY was going to game. A friend of mine and I went to Penders when he first arrived, we guaranteed him 20 students to come to every game and he gave us great seats-right behind Tom Kite! But he could do it cuz NOBODY else came. Heck, Xavier and I had a tough time getting students to come to our section.

Anyway, I’m in nosebleed for this game, with my friends from Nam, Nolan has gone strollin’, Fallopians are up by 3 and shooting FT’s with a couple seconds left (was it Blanks? Wright?). All 16000 of those poor fans had all their 32000 hands in the air and it was LOUD! And I’m pissed, those damn refs just really took Oliver out of the game, I have no idea how he stayed at 4 fouls for the final 8 minutes or so.

When he missed, and Lee rebounded, dribbled the court, nailed that 3, it was the most dramatic change of scenery and noise I’ve ever seen in my life. 32000 hands dropped, 16000 mouths closed, all I can compare it to is when a giant school of fish suddenly change direction, just awesome to behold.

And the 6 of us, going CRAZY! people were too stunned to even be mad at us.

But that changed, lol. when Zimmerman ran across the court with down horns, Nolan came back, and especially when we KICKED THAT ARSE on OT, boy did it change. those were some hot Fallopians! One was yelling “have a nice drive back to hick town!”, we were just laughing-“we are staying at Jester dorm!”. thought we might get killed, but it would have been a great time to die, “life don’t get no better’n that!”.

Great weekend, great game, man oh man I loved that team. still think they were our most talented team ever.

Thanks for sharing. Made me Hog proud!