I spoke with Brady Slavens today

Slavens described the past week from going undrafted to driving back to Fayetteville to meet with Arkansas’ coaches about playing again in 2023. He also disclosed that he will soon have elbow surgery to repair an injury that hindered his ability to play defense this year. 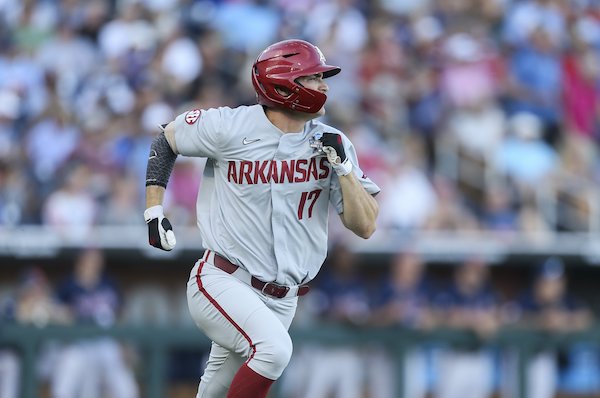 Slavens 'beyond excited' for return to Razorbacks

On Thursday, Brady Slavens made the drive to Fayetteville from his family’s home near Kansas City to discuss his future with Arkansas’ baseball coaches.

Getting him back really is a nice surprise. His experience and leadership could be big.

Much needed veteran and bat returning to mentor the new guys. Frosh & transfers.
I don’t recall the elbow injury mentioned during the season although it may have been discussed.
Welcome back Brady.

I don’t recall Brady’s injury being mentioned either. I doubt that it was.

Just something for us to keep in mind when we get frustrated and want to criticize players. They often are dealing with things we don’t even know about, whether it be physical or mental. It’s probably wise to cut them some slack more often than not.

instability is an interesting revelation since I assume they are going to figure a way to go tack the nerve down to keep it from slipping and sliding in it’s tunnel crossing the elbow. I assume Brady had pain and numbness that had varying degrees of symptomatology. Ulnar nerves are usually pinched and trapped and not unstable so this description is a bit unusual… Medically it is much easier to fix tightness and trapping rather than instability and loose slipping for the ulnar nerve in the cubital tunnel. I would take a wait and see for the 12 week time frame projection, more likely a bit longer.

I wondered what his defensive role would be but I see in the article he said he’d have a chance to play first base. Which is what I was thinking.

I think that also, Stovall moves to 2nd.

I have always heard that Stovall is very good at 2B. We got to see that a few times in mid-week games this past year. He will have a ways to go to be as good a Moore, but there won’t be much of a drop-off, if any.

I have always heard that Stovall is very good at 2B.

Are we set at SS? It just seems a little curious why everyone seems pretty sure Stovall will play 2nd. As I understand it, he was recruited as a SS. He was ranked very high as a SS. I believe he was in the MLB draft as a SS. It would be totally understandable to me if Battles were coming back.

In HS and summer leagues, I played SS. In college and later in the military, I played 2nd. I had a SS glove and range, just not a SS arm. I could field a ball hit in the hoIe, but unless the batter was slow, I couldn’t throw him out. Is this the case with Stovall?

I think he will be a second baseman because that is where the coaches have said they see him playing in the future. It is the position he is playing this summer on Cape Cod.

I think he will be a second baseman because that is where the coaches have said they see him playing in the future. It is the position he is playing this summer on Cape Cod.

Oh, I believe you and everyone else that he is, and will be playing 2nd base. I just thought maybe the coaches had a specific reason for not considering him for SS with Battles headed to MLB.

I’ve always considered SS a slightly more important infield position than 2nd base. It just seems in college and MLB,that SS and CF positions usually have the best athletes on the team.