I see the Kentucky fans upset with the refs

I sense that the losing teams fans normally blame the refs.

I got drafted once to ref a basketball game and dicovered just how tough it is to see half the action on the court. Back in my day the slower game was easier to call things like walking, fouls under the basket etc. but in todays game it is a tough job.

I haven’t reff’d a game since intramurals in college and grad school. It was horrible! very hard job to do live, there is just so much happening with 10 bodies to watch.

But last night was extremely well officiated. In my unbiased opinion, lol

I love love love, the KY fans and players and coach, whining about officiating. that is RICH!

Oh, the irony, the lack of self awareness. Oh, the joy in my heart this morning!

If their main gripe is the final foul on Tate, then they can just get over themselves. He got pulled down, by the face. A foul with 4 seconds left is just as much a foul as one with 4 minutes left.

Yes my heart hurts for the bluebloods. Their idea of poor officiating is " why aren’t those zebes doing more to help us win?" I guess that’s what happens in a historically bad year. You lose favored nation status. No reason to protect an unranked team that has no chance to dance.

I didn’t think there was much question Tate was fouled. The AP photo shows two fouls — hand on arm, hand on face: 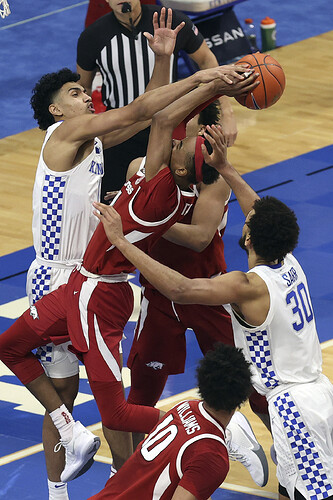 No blood, no foul.

How many times over the years have KY fans laughed at other teams for complaining about calls, should learn the rules of the game, etc.

Principle of verticality. Defenders arms are not straight up, plus he’s making contact on the arm, and hip. Plus the other defender is I guess giving Tate a scalp massage. How many fouls can you commit on a play?

Near the end when we had the lead the ESPN camera’s panned Rupp and the sad, solemn looks on the KY fans were priceless. A KY friend texted me last night grumbling big time about Cal. Funny, funny, funny!

KY fans are getting plenty of practice complaining about refs this year. 13 practices in fact and counting.

Saar has a future in professional wrestling. Looks like he has been practicing his claw hold, ala Fritz von Erich.

I bet bluegrass enjoyed himself a good bourbon after the game in celebration.

KY fans are getting plenty of practice complaining about refs this year.

Most of the time they’ve been complaining that they can’t shoot straight. Shot straight last night and still couldn’t win,

I ran over to the KY boards and most are livid with Coach Cal… wanting him gone. He may have to crawl someplace else soon.

I wish someone would post a shot of the Monk throat slash! Last. Ohh The was just the beginning of the end for Greaseball and his hype train to land top recruits. His way of taking care of players and not putting winning championships as his priority will be the end of him. The natives in Lexington are getting fed up with his freshmen excuses. They may even start to see his gets less out of the most talent in the country. When they kick him to the curb I hope it cost them the farm! That lifetime contract will come back and bite them. It’s pretty funny.

And that’s not the foul they called. They called Toppin on the arm during the putback attempt as shown in Matt’s photo. That’s Sarr slapping him upside the head.

I have to give full props to Tate. Not a great foul shooter (67% after last night), but he knocked down the first one, Squid iced him with a timeout, then he drilled the second one anyway.

How many fouls can you commit on a play?

Back when Guy Lewis was coaching Houston, we joked his coaching plan was to have all five Coogs fouling at once; the refs couldn’t possibly call all of them.

Kentucky played poor defense on the play. They gave up the drive to the rim. They didn’t get the rebound. And, two guys fouled Tate. Most focus on their offensive woes this season. But they are not nearly as good defensively as in the past. That is lack of lateral quickness. I thought Arkansas was the quicker team for this game. They often have not been in many SEC games. Certainly, LSU and Alabama are quicker than Arkansas. Not Kentucky.

Kentucky played poor defense on the play. They gave up the drive to the rim.

I thought they fouled Devo on the shot too, but it worked out.