I’m feeling good vibes about the possible hire of Lane Kiffin. It’s early in the process. But I will be surprised if he’s not one of the main targets. I kinda like it, too. Be fun to cover.

I wasn’t excited at first about him but he’s growing on me.

He has a name that’ll draw attention for sure.

Kiffin, Inc. is a big brand in the big business of CFB.

I’d be fine with that. Bring him on.

Ugh. I havent’ kept up with him since Saban let him go right before the NC game. His career up to that point was of a smart guy who was “born on 3rd base”, and was as immature and spoiled as he could have been.

If he’s our guy, I sure hope he’s matured. A LOT. Joey Drinkwater, ugh.

My prediction in September and things played out almost exactly as I predicted - firing a week later than I anticipated.

My prediction of Leach was all about trying to elevate a moribund brand. Kiffin would be the same. Coaching ability matters a lot, but so does brand appeal when the fan base is diminished and the world of CFB considers you a mere after thought.

I think it will be Kiffin or Leach.

I’m not going to get my hopes up, but he is still my #1 candidate for turning this around and getting us competitive on the national stage again.

Thanks for the update.

After seeing the prospective coaches discussed over and over I’ve become more comfortable with Kiffin. He’s certainly been around the block and has show he can recruit. Hopefully he’s learned a lot the last few years.

My biggest complaint was the character of kids he recruited to TN. Most did not last but a couple of years for various reasons.

My number one by far. Guy has a ton of great experience. Norvel has done a great job at Memphis but all his prior experience was under Todd Graham.

Open the check book and get two top tier coordinators to go along with Kiffin and think we could be on to something very good here.

Morris’ demise in my opinion has a lot to do with his OC and DC. Loyalty to your staff can sometimes come back to bite you

Kiffin has lived football all his life. Think his name alone would attract recruits.

@jacksonreid what’s the deal with Norvell? You seem to have the inside scoop.

If reports were true at time Morris was hired , hard to believe Kiffin was not selected based on the resume . I know the issues as well but his resume is pretty strong in today’s coaching profession. Head coach NFl at 32 and now 44. Here is wikipedia’s bio. 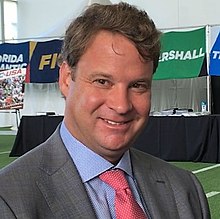 I went through all of the coaches whose names have been mentioned last night, comparing them to a list of criteria I think the AD might be using. After going through the list against that criteria, Kiffin scored the highest. Doesn’t mean anything, because I don’t have the AD’s criteria, other than the direction seems right to me.

On that note I should mention that Rhett Lashlee has been named as a candidate for the Broyles Award.

He’s been down in Florida for three years quietly(for him) doing his penance. FAU won 9 games in the three years before he got there, and they’ve won 23 so far in the last three years. FAU is not top-tier in CUSA for fan support or facilities, so he’s had to coach that program into relevance in that conference. He may have been born on third base, but after a very public fall he’s had to go down a couple of levels and prove that he really does have some coaching chops. If he’s the guy, I think we would probably be getting a better Lane Kiffin than UT or USC got.

Could we not get Kiffin to leave early from Florida Atlantic Tech or whatever that is?

Okay, I would take Kiffin. However, I would want him to go after Ted Roof at Appalachian State as defensive coordinator and Rhett Lashlee at SMU for Offensive Coordinator. I would want him to keep Lunney and go after Tim Horton as running back coach. With that combination I would bet all day long that Arkansas would get major recruits and turn this program around in a reasonable time frame.