I hope we dont miss the chance

to put down a red field. 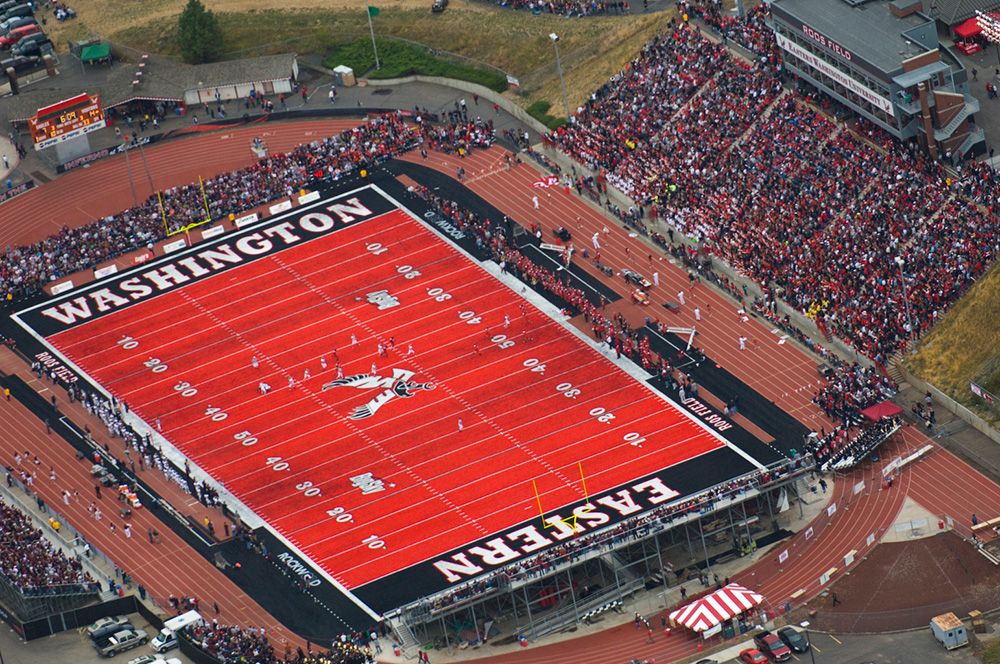 Personally I would like to see us go to Desso Grassmaster. Real turf with a network of artificial fibers providing support. The Packers and Broncos use it, as well as numerous European soccer clubs who play all winter. If they can get grass to grow in northeast Wisconsin in December (and they do), we should be able to get it to grow in NWA in November. From what I can tell, installation cost wouldn’t be hugely different than replacing the current plastic grass.

Let’s get back to real grass.

Something about football on grass, the smell and look when you ge in the stadium that gets me going.

Tired of our ugly turf, so anything will be an upgrade. The red would certainly bring some attenti

My best guess is that they will repair (if possible) the area the cranes are on now. And put in grass next summer. The process of putting in a good grass field can’t happen in the time it will have after cranes and equipment are off the field in mid summer. I could be wrong, but that’s what it looks like will have to happen. The decision will be made when construction crews are off the field. Or they know exactly when it will happen. There are some variables now.

to put down a red field.

I hope you’re joking, Gas. If there is anything that would push me off the boat - and, it would take a lot - that is it.

I’ve ranted and raved about uniforms at times over the years, but have come to accept that those will inevitably change more often, and be designed differently that I’d like. But football/baseball were made to be played on green fields that either are are look like grass. No red grass anywhere I’ve ever been, or want to be.

If we were ever to do that, it would be time for me to turn elsewhere. Seriously.

That’s what teams like Eastern Washington do to get some sort of attention that their teams can’t get. If we’ve sunk that low, what’s the use of following the program?

For their level of football Eastern Washington does not have to go looking for attention. They typically put a very good product on the field. I like green and real grass of some sort if we can do it right, but I would not get all bent out of shape if we went with red. Red is not my first choice, but it is not a deal killer either…

Let’s keep the red grass in Panama where it belongs.

For their level of football Eastern Washington does not have to go looking for attention. They typically put a very good product on the field. I like green and real grass of some sort if we can do it right, but I would not get all bent out of shape if we went with red. Red is not my first choice, but it is not a deal killer either…

They have so much “attention” that I had to look up what NCAA Division they play in . . . and I’m a guy that loves college football. Thing is, I . . . like about 90% of fans who identify as “college football fans” . . . don’t know or care much about anything other than Division 1A - now known as “FBS”. The only Division II (FCS) team I can name off the top of my head is North Dakota State, and that’s only because (a) they’ve won something like 6 of the last 7 Championships; and (b) because they play the Championship game of that Division close to me (in Frisco) and I see all the green and gold NDS fans at the sports bar after their win every year (while I’m there watching a Hog basketball game).

I’d bet if we dropped down to that level we’d have a lot of success, as well. But that’s not what I, nor 95% of the people reading this board, want. We play with the big boys, in a League that football matters to. Having a gimmick colored turf would - and rightfully so - be ridiculed by everyone else in the conference. And it would be used against us in recruiting, to show that we “don’t belong” in a conference that takes it’s football so seriously. In short, it would be a sign of desperation and “give up”.

It’s a look that just screams Boise wannabe. Now I can understand why a program like E Dubya would want to be like Boise. I realize that the Boise program has come a long ways since the days of HDN, but I still aspire for something higher. Don’t think it will ever happen, but we live in a time where tradition really doesn’t mean much. It’s all about what we think the players want.

I like real grass and hate the artificial stuff!
The grounds folks will make a good decision about what to do this summer!