I got DVH wound up today 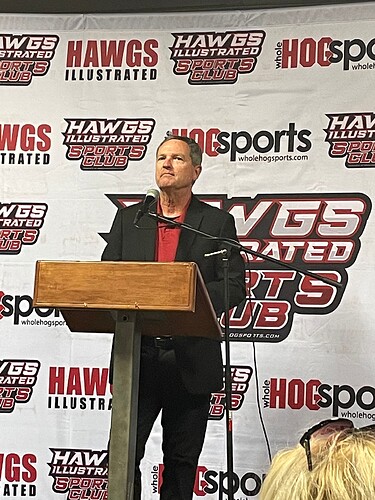 He spoke at the Hawgs Illustrated Sports Club this afternoon. After he reviewed most of the team, returnees, newcomers, pitching, etc. he asked for questions. I was first and I asked about the possibility of a third paid assistant. He wondered if I had been prompted. (Nope, I really want to know.)

He indicated that the issue would be up for a vote again this spring.

A team with about 20 pitchers has 1 pitching coach. That leaves one coach, along with the “volunteer”, for the other 21 players. Here’s hoping the xii get their heads where they belong and vote for the third coach. DVH did indicate that there was considerable criticism of the down-vote a couple of years ago.

The new NCAA constitution will eventually allow a lot more freedom to correct stupidities like three coaches for 40 players. The reason there are stupidities like that, of course, is that the ASWhos of the world can’t afford it and don’t want those who can afford it to have it (as if that will allow them to compete with Vandy or the Flopnecks or us).