I don’t know what the problem is but

HY should tell the people responsible in central Arkansas that IF you don’t have facilities to put basketball games on TV, we no longer will play there. I have no problem playing there at all, but if no TV no dice! Absolutely ridiculous!

This is UA’s decision. They could have rented a truck and production crew; they didn’t. I suspect they like not having it on TV; it keeps people from staying home to watch instead of buying tickets.

Just stop it, Swine. Everybody says how well the fans show for the 1 LR game. I bet it would be the same, broadcast or not. We do not play well there, and we were very lucky to win tonight. Personally, it sucked having to listen to the game in my bathroom (where my only radio is), with my hat on backwards, a towel in my hand, and my dog wondering why I was screaming. This is the 21st century. If we are gonna continue to play in LR, figure out a way to at least stream the damn games! I know I’ve got support from Piggus, NV, and I reckon Jim in Colorado and the guy in Hawaii would be on board as well. And we are willing to pay for the privilege! It was absolute torture having to listen to this game tonite, especially if I am prepared to pay to watch it. Sorry if I continue to beat a dead horse, but I’ve been pissed about this all week.

figure out a way to at least stream the damn games!

I know it’s a dead horse, but it really sucked at the end of the game not being able to see Jones’ back-to-back 3-point daggers and Dro’s block on Liberty’s tomahawk attempt.

Swine is right on this one. Pulaski county is not going to spend the money to upgrade Simmons for one game a year. Had this game been in Fayetteville you think they have 9-11k. Few hundred short of a sellout.

Well, I watched the game on my computer here at the house. Some guy streamed it on twitter with periscope. pretty sure he did it with a cell phone. Not a big time production. Most of the time he was showing the video of the game on the scoreboard. Folks kept standing in front of him. The score board shows the game. Tried to watch and listen on the radio but the visual lagged the radio about 10 seconds…

I saw them! It was a good game. I’m glad I didn’t have to drive 3 hours home.

No. Had it been a Saturday night game in The Bud, on a holiday weekend, it might have drawn 16k with the excitement around this team. Furthermore, I sincerely hope we never play another name team there again. If LR can’t move into the 21st century, move the game back to campus. It’s absolutely ludicrous to play a game in an arena that doesn’t have the capability to broadcast the game to it’s fans. Everywhere I have ever been in the world, I have seen someone with a Razorback on their clothing. It’s not fair, in this day and age, for anything less than full coverage to be the norm.

Good gracious. What a bunch of whining and discussion of first-world, no TV problems. It’s one game. NLR is just fine. In fact, I bet it had a better crowd than what BWA could muster this weekend. Crowd helped get the W in fact. Hogs are 10-1. It’s Christmas, we’re all getting along politically. What more do you really want?

No way BWA would’ve had that many people against that opponent this weekend. I’m in Memphis & regret I couldn’t see it, either, but good gosh, it’s one game. People got to attend who won’t be able to attend another game all season. It’s good for the program to allow them that opportunity.

I’m still in the 20th century. I enjoy listening to Chuck Barretts call of the game.

I don’t know how you can spend that much money on an arena and forget to wire it for TV or live streaming. And you fans in Little Rock need to get over yourselves.

It’s not that simple

There are all sorts of misconceptions in this thread. Let me try to clear a few of them up.

One, most arenas are not wired for streaming. SECN does it on campus because they have in essence 14 studios they’ll be returning to over and over, multiple times a year. Everybody else generally brings in production trucks, which is what we would have had to do last night. That costs about $50,000. I don’t know who has decided it’s not worth it, whether it’s UA or SECN, but somebody has.

Two, Simmons Bank Arena is now 20 years old. It would not have been wired when it was built because that technology didn’t exist in 1999. It would have had to be retrofitted just like BWA and Baum and everything else on campus was.

Three, and this is for Jeremy. I would have loved to be able to watch last night. I was listening to the game on my app which apparently was about 90-120 seconds behind real time. But I couldn’t. I’m just telling you why we couldn’t. Don’t shoot the messenger. I didn’t make those decisions. I’m pretty sure they’re not going to bother renting a truck for a relative no-name like Valpo. Get a name team in there, they might bring in a truck and actually show it on SECN, not just stream it. Who we schedule is UA’s decision, whether SECN wants to carry it is theirs.

Fourth, 16K in BWA last night with no students? Not likely. I’ve been in BWA for an SEC game Christmas week (Florida, ranked in the top 25, in December 2016) and they had about the same crowd. We were 11-1 coming into that game, too. Valpo isn’t ranked.

As a confirmed old school guy I kinda like having to listen to a couple of games on the radio. Chuck and Zimmerman do a great job and it brings back memories of me listening to Hog basketball with my small transistor radio as a youngster. I don’t know why I don’t listen to Chuck when we’re on TV. I think it’s because of a delay problem.

The folks in NLR have more important things to spend money on than broadcast facilities for 1 game a year. And a presence in central Arkansas is good for the team and brand.

I think I attended every game the Hogs played in PB at the convention center. Unfortunately that is not a good idea anymore. My hometown is not a great place.

I’m an old goat too! My radio is playing Chuck every game! Especially during Halftime when the Greaseball Cal and Lying Pearl commentary takes over!

I listened to the radio broadcast last night, had the live stats on my iPhone, and the periscope on my iPad. Only issue is there were delays between the three. Live stats froze up 60-51 Valpo (the score was never 60-51). And the broadcast delayed about 45 seconds with the Hogs down 59-54. By the time the radio picked back up (and it was still behind) Bailey was making his block on the periscope. 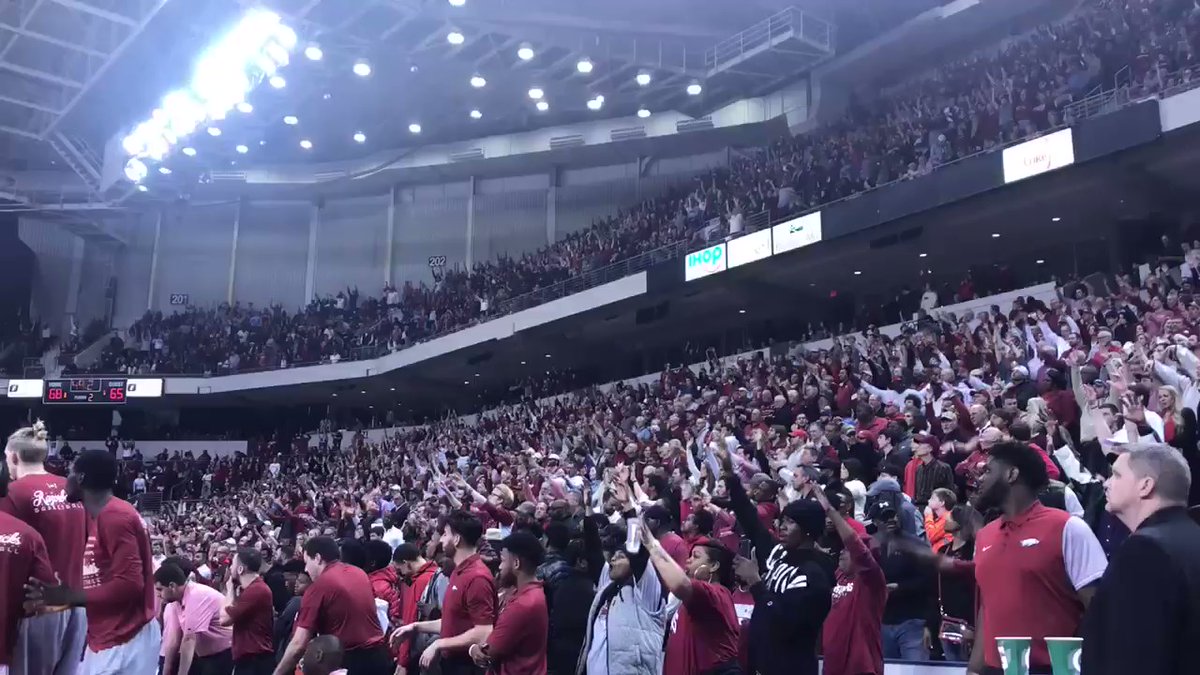 Amazing passion from Razorback fans (not surprising) at Simmons Bank Arena tonight. Love this Hog Call after Razorbacks complete the comeback and re-take the lead late, on the way to a W! #OneRazorback https://t.co/NJFalCBbXP
pjhawg December 22, 2019, 3:18pm #19

Very good post to clear up misconceptions. Also if a name team plays there against the Hogs, ESPN or CBS will televise it. May not have to depend on SECN.

Yeah and whoever was doing the box score for ESPN was taking info from the live stats so the “final” numbers were for 60-51.