---------------------- like Lockhart did last year. After that succeeded for him and he had rave reviews about playing for the Hogs, liking the locale, the benefits of our development system, etc. I thought there would be a bunch of really good pitchers on OK teams who would jump for the chance to fill the obvious need we had for quality starting pitching. Almost a guaranteed shot at the college world series and no one reached out? Maybe they did and DVH is confident about his recruits and returning pitchers and he turned them all down? I wonder if DVH would talk about this if one of you reporters asked him?

Pretty sure there were pitchers that reached out to the Hogs (and vice versa). One factor that came into play was the July 1st deadline. Not sure if that was the date by which you had to enter the portal, submit paperwork, or whatever, but some would-be transfers failed to meet that deadline for whatever reasons.

I kept seeing talk last month that the Ole Miss pitcher from Texarkana who started against us in the SEC Tournament game was going to transfer here. It was said that it would be announced in early August, but I haven’t seen anything to indicate that’s actually happened.

Cody Adcock from OM is who your talking about,He was said to be coming but like you said,no mention of it happening as of right now.

For what it’s worth Adcock is no longer on the OM roster.

Wonder what is taking so long?

DVH can’t say anything until school classes start and players are enrolled.

Until a transfer is in school, they are not your player. They can sign agreement for a scholarship that protects the player, but it does not protect the school.

I remember an article in HI a few years ago that talked about coaches checking into motels so they could keep contact with a signee until he actually attended a class.

I do not think they had LOI yet.

If it indeed has happened that’s when we will hear about it.

The reason there has been no news on Adcock, is because he’s been waiting on a waiver. Trying to transfer after July 1st is much more difficult to do than prior to that date.

He tried to get to Fayetteville immediately, but instead will play at Crowder for a year before wearing a Hog uniform.

At least he’s not going to be wearing that awful baby blue Rebel uniform (apologizes to fellow SL Cardinal fans who like that look). Perhaps someone who is tech savvy can photoshop this photo…… 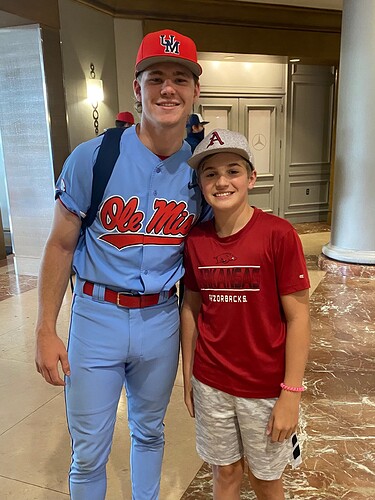 Oh ok Glad to know what’s been going on,appreciate the info. Hopefully he will improve and join us ready to roll in 2023