Hypothetical question for the board

IF you could choose any former Hog from the Triplet era forward, NOT named Williamson, Scotty Thurman or Joe Johnson…to add to this team…ONE player…who would it be?

I’ve given it some thought, and two players come to mind. And again, I’m not necessarily saying “who is THE BEST player” in that era…just who could add the most to this team, as constituted.

Lots of choices there. I’m torn between Todd Day and Joe Kleine. I think we need help inside, but hard to pass up a scorer like Todd Day. I’ll go with Day.

Joe Johnson. The hogs need a player that can flat knock down shots and Joe can still do it.

I’m going with Cory Beck. We need a point guard and a floor general. Cory adds toughness as well.

Wiz said not named “…Joe Johnson.” in his OP.

Marvin Delph, we need a dead eye from 3.

I agree with KJ.

Substitute Lee Mayberry in the starting lineup for Umude, and slide Toney back to the “3” spot. Add Stan to the punch you get from the bench.

#1 obviously Oliver Miller. We aren’t going very far with one big man. No disrespect to Kamani Johnson but no matter how good Jaylin Williams plays we aren’t going to ride his rebounding and defense down low for 6 straight wins in March against the best and biggest in the country.
#2 is more difficult for me. This board never gets tired of bemoaning our lack of point guard play. But how many shooting slumps have we had this year. How many weeks did we spend near dead last in the nation in 3pt shooting? How am I going to pass up a Todd Day? I mean notae leads the league in scoring but he’s also the guy that carries his teams offense on his back more than any other. Umude just had a good game. One good game. Are we ready to say our shooting problems are solved? Tbh I think notae does a pretty good job at point guard and our biggest weakness is a go to scorer when notae is in foul trouble or getting double teamed. So, I’m tempted to say Ron Brewer for possibly the best combination of scoring passing and defense. But I think we need a flat out untouchable offensive threat that can attack the rim and stretch the floor from deep. Give me Todd Day all day! And I’ll trust devo enough to bring the ball up the floor in a pinch.

Agree with needing a shooter. I’d never turn down Marvin Delph when choosing shooters. But how about a PG that can shoot?

Hands down not even close… Lee Mayberry.

I absolutely agree with needing another big, but I wouldn’t use the Big O. I also would pass on MayDay (Mayberry is my favorite Hog of all time, and Day is/was an incredible college player).

I know many will get upset with why, but here goes: I watch our current team and the way they carry themselves on the court, they remind me of the 91 MayDay team. Remember the incident with Johnson (not the “need men” statement, but the Day “fight”). Todd faked a punch, he knew Larry would whoop his arse. I also don’t remember Oliver or Mayberry coming to the rescue. And I’m not sure anyone on our current team would either. However, you saw me say Beck above, it’s because he would have, and if it was him instead of Day, I think he would have whooped Larry’s rear. I know that JWill is slowly becoming the leader of this team (and that’s why we seemed to have improved so much). Beck would have lead from Day 1, and we wouldn’t have lost to Vandy or Hofstra. 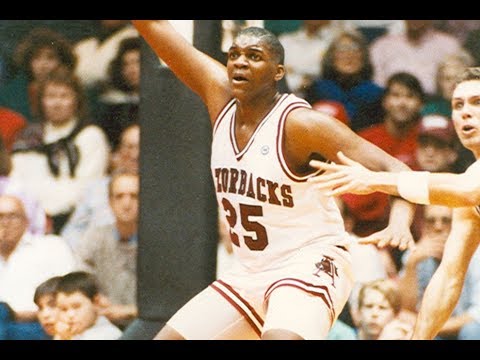 I’ll choose Lee Mayberry every day because I think this team needs that PG and facilitator. Look how great we looked against Georgia when Lykes was more under control and had a bunch of assists.

If I had to choose a big, it would be hard, we have had some good “bigs” to choose from, but I think the one that would best fit the positionless Muss style would be Daniel Gafford. I think he would be a beast on this team.

but I think the one that would best fit the positionless Muss style would be Daniel Gafford.

I like that, and honestly didn’t think of him, but that’s a very good big to go with this group.

I think this team needs that PG and facilitator

Lee Mayberry. Ballhandling has been the most glaring weakness of this team, IMO, and though that has improved immensely recently, Lee was a ROCK with the rock, and a deadly shooter to boot.