In the stands for football. 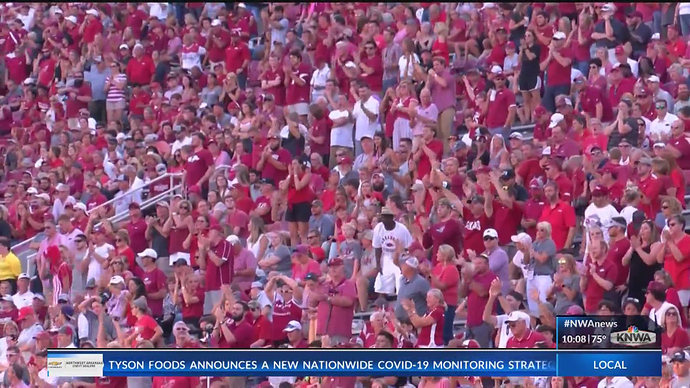 Arkansas Plans For Fans At Razorback Stadium This Season

The good news is that the University of Arkansas does have a plan for football this season. However, things will look very different this year. According to Arkansas Athletics Director, Hunter Yura…

Several games last year that probably had less than 18k in the stands.

Yes. In a normal season we sell twice that many season tickets (maybe some fall off the last 2-3 years.) There’s going to have to be some sort of hierarchy, rationing of tickets, or both. Top donors will certainly get first choice, but they might do something like limit ticket holders to 2-3 home games.

Several games last year that probably had less than 18k in the stands.

I don’t think so. Attendance sucked, but I don’t think it was ever that bad—at least not until after the game was decided.

I thought we might try to get 20% in… kind of surprised it’s 25% but that would be great if they can do it.

Yes 25% would be nice but I’m still curiously wondering why 35% capacity would not work which would allow for social distancing for fans, coaches and media.

35% capacity would not work which would allow for social distancing for fans, coaches and media.

Not really. Six feet at RRS is four empty seats horizontally and two full empty rows vertically. Even 25% would be stretching it, If you have a group of two on a row, they would need like 32 empty seats around them to be six feet from everyone.